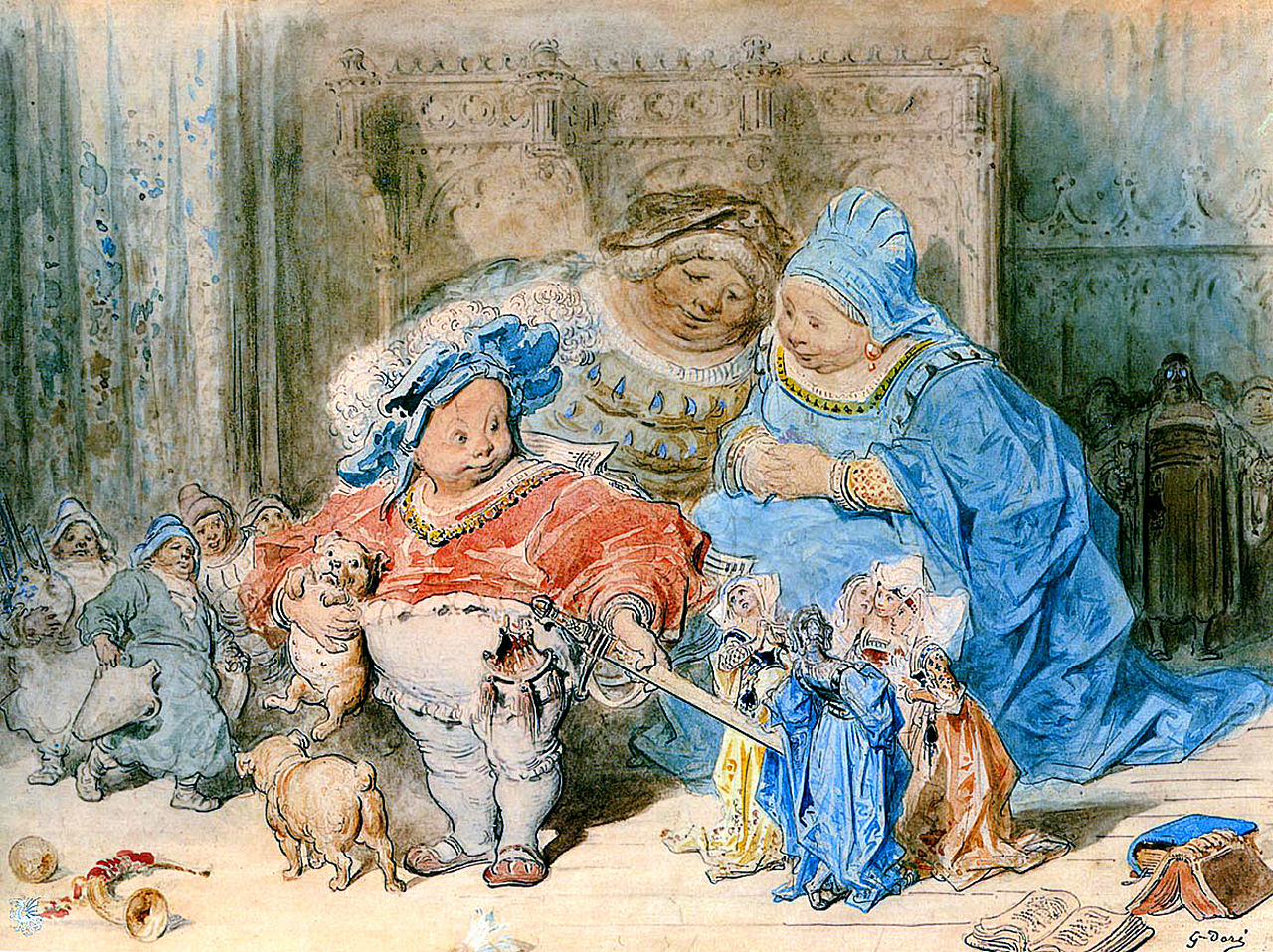 In the second book of the 16th century novel by Rabelais, the voracious young giant Pantagruel, “large as life and much nosier,” is sent to Paris for his education. There he displays prodigious academic aptitude, mastering every conceivable subject with the greatest ease and besting the most able rhetoricians and philosophers in debate. So great is his reputation that he is summoned to adjudicate a law suit—a “controversy so involved and jurisprudentially abstruse that the highest court in the land found it about as clear as Old High German.” When the lawyers and jurists propose to give Pantagruel the relevant texts, writs, historical records, learned treatises, and legal authorities, he orders all of this “scribble-scrabble foolscap” immediately burned. These materials, he scoffs, are “pure subversions of equity,” for “the law grew up out of the field of natural and moral philosophy.” After a perfunctory hearing and by the light of “philosophical and evangelical justice,” Pantagruel rules with swift panache, and his judgment is hailed as wiser than Solomon’s.

Pantagruel is coming for the Establishment Clause. He comes today bearing the standard of equality, and the manifestations of equality that he would have courts superimpose on the Constitution. In several disputes ostensibly involving the constitutional prohibition on “laws respecting an establishment of religion,” courts are interpreting this provision of the First Amendment to require adherence to a kind of pure principle of equality, or its close cousin, neutrality. And just as Pantagruelic justice beguiled Rabelais’ fictional Parisian intelligentsia, so, too, does the legal professoriate extol the egalitarian justice of today’s courts. Yet though certain forms of unequal treatment by the state on the basis of religion surely do create questions of constitutional dimension, we now face something like the obverse situation: courts so rigorously adhere to notions of egalitarian justice that the Establishment Clause is bloated to the point of collapsing of its own weight.

One prominent example of the Pantagruelic dispensation concerns the constitutionality of the display of religious symbols on government land. Before the late 20th century, such displays—often erected by municipalities to recognize the Christmas holiday celebrated by the majority of the populace and to acknowledge that Christianity has had a central historical role in the United States—had never been supposed to come within the compass of constitutional prohibition. But beginning in the 1980s, the Supreme Court decreed that such symbols were forbidden if they conveyed a message of exclusion or unequal political status to a “reasonable observer.”

The result has been an effort by municipalities to dilute any conceivable message of religious “endorsement” by cluttering their displays with ever greater numbers of symbols (some religious, others secular, and still others evading classification), lest anyone feel unfairly excluded or treated with anything less than perfect equality. But the logic of the test has no limit. It transforms virtually any perception of inequality into a constitutional injury. And because has become impossible to include a sufficiently diverse miscellany of symbols to satisfy every potentially offended psychic constituency, it is easier (and safer from a litigation standpoint) simply to eliminate them entirely and prohibit the state’s recognition of the religiosity of its people. Philosophical justice—achieved by the elevation of equality as the master principle of the Establishment Clause—razes all other interests in its path.

It appeared for a time that the Supreme Court might have tempered this approach in its latest Establishment Clause decision, which concerned the constitutionality of prayers offered by local legislative bodies in advance of session. The Court acknowledged that the American tradition of praying for divine guidance and blessing as citizens enter upon civic matters predates the founding of the Republic. Here is another practice that was never thought to implicate establishmentarian concerns until the late 20th century. Yet even in affirming the constitutionality of legislative prayer, egalitarian currents were never more than inches below the opinion’s surface, as the Court emphasized the need for all municipalities—no matter what their demographic makeup—to accept any and every group, “any minister or layman,” that might want to participate in prayer-giving. “Once it invites prayer into the public sphere,” the Court observed, “government must permit a prayer giver to address his or her own God or gods as conscience dictates.” This all-comers approach has resulted in the predictable spectacle of highly publicized “atheist invocations,” a bit of grotesquery that has been received in some circles with equal measures of spite and glee.

Similar phenomena are occurring in the field of public education. Recently the board of education in Montgomery County, Maryland, eliminated all religious holidays after a Muslim group requested, rather innocuously, that a Muslim holiday be added to the school calendar. One can disapprove the school board’s choice while sympathizing with the county’s lawyer. The Supreme Court’s “endorsement test” probably would not have forbidden the accommodation. But inclusion of a Muslim holiday would almost certainly beget demands from other groups with equally minuscule populations within the county yet with no less powerful claims that their particular holiday’s exclusion from the school calendar was not neutral and treated them unequally. Better and simpler, if only for administrative tranquility, to strike all traces of religion from the school calendar.

No matter. Pantagruel cares not for history. Today, when public schools open their doors to outside groups that wish to use their classrooms for sundry after-hours activities, religious groups have often been excluded on the basis that their admission would signal a preference for religion. Some religious groups have invoked equality to protest their treatment: after all, why should they be denied access to public school classrooms when non-religious organizations are favored with access? The Supreme Court has recognized these claims, not for the eminently sensible historical reasons that motivated the Founders—reasons, it should be noted, that sound in a plausible account of the separation of church and state—but again in the name of egalitarian justice.

Some circuit courts, however, have interpreted the High Court’s multiple egalitarian Establishment Clause standards to require the exclusion of religion. In a recent case, for example, the Second Circuit held that the New York City Board of Education’s worries about “the appearance of endorsement” of religion (rather than its actual endorsement) were sufficient cause to deny equal access to a religious group that engaged in worship services. Permitting the religious group access on equal terms with other groups would not exactly violate the Establishment Clause; instead, it might run afoul of “interests favored by the Establishment Clause”—interests that require the religious neutrality of the state and its absolutely equal treatment of all religions and non-religion. Equality, it now seems, demands unequal exclusion.

In at least one area—state funding for religious education—the blinkered elevation of equality might have unexpectedly radical implications for the Establishment Clause. The use of public funds to support religious institutions was historically one of the primary dangers against which the Establishment Clause offered protection. The reasons for that proscription had little to do with equality. Instead, state funding of religious institutions—and particularly of religious education—was thought to coerce taxpayers to support religious views with which they might disagree.

Yet under a regime in which equality is preeminent, there are powerful arguments in favor of public financial support of religious schools. Indirect government aid to religious schools in the form of vouchers, for example, makes it possible for poorer students to obtain a better education. The Supreme Court, invoking exactly the language and rhetoric of neutrality, has held that vouchers provide at least some educational choice for those who might otherwise have no other option than to attend dismally performing public schools, thereby mitigating to some extent the pervasive educational inequality in America. As public schools become increasingly secular, the unequal impact inherent in the government’s fiscal favoritism of secular public schools over religious schools becomes more difficult to justify.

At least on strictly egalitarian premises. In fact, the religious neutrality of the public or government school was always a pretense. State schools, like state organs generally, are not neutral institutions. They have educational programs to implement, basic skills to impart, and core values to instill. Public education is a vast machine devoted to vocational training and American civic socialization. There is nothing neutral in any of its purposes, and it is utterly fanciful eyewash to suggest that it treats all viewpoints, let alone all religious viewpoints, equally.

To mandate equality as the master philosophical ambition of the Establishment Clause ignores these realities and does violence to its defenseless text and historical ambit. Pantagruel would approve.

CIA Versus the Senate Intelligence Committee

Bludgeoning Aspiration to Get to Equality

It Happened One Night: Alexis and Mitt in America