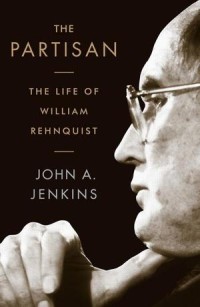 With a title like The Partisan, we should know what to expect.  John Jenkins’s biography on the late Chief Justice loses no chance to paint him in the worst possible light.  Rehnquist is a nihilist, dogmatic, cold, distant, a racist, not a hard worker, and dangerously bound to a desiccated judicial philosophy, unless its results would contradict his desired policy objectives, in which case any legal theory will do.

This gives the flavor, taken almost at random:  “Rehnquist’s judicial philosophy was nihilistic to its core, disrespectful of precedent and dismissive of social, economic, and political institutions that did not comport with his black-and-white view of the world.”  Jenkins also mysteriously knows Rehnquist’s mind; he states, for example, that Rehnquist was “elated” that spies Ethel and Julius Rosenberg were going to be executed.

Yet we do not get an explanation of what this nihilistic judicial philosophy means, only that it must be terrible.  Except when it isn’t, as, for example, when Rehnquist – supposedly a justice who disdains the force of precedent – upheld it in the 2000 Dickerson case, which confirmed the constitutionality of Miranda warnings.  Nor does Jenkins explain Rehnquist’s devotion to precedent in 1992’s Planned Parenthood v Casey.  One may agree to disagree with the decision, but Jenkins offers only the barest interpretations of Rehnquist’s votes, and then only to draw the worst possible inferences.  He favored Miranda warnings, of course, because they help put people in jail faster!

Rehnquist is obviously a significant figure in the law.  His legal philosophy – which despite Jenkins’s distortions, comes across as reasonable and coherent, deserves better treatment than this.

Gerald J. Russello is a lawyer and editor of the University Bookman (www.kirkcenter.org)

The Passing of James Buchanan

The Horror of Morrison v. Olson – Part III: There is No General Separation of Powers

Without Rehnquist's unique Glucksberg opinion, the conservative justices in Dobbs would have lacked a workable due process standard.