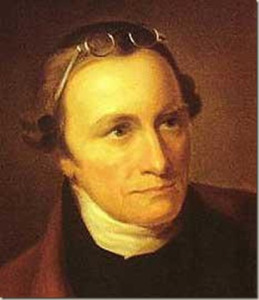 From Michael Klarman’s review of Pauline Maier’s book Ratification: The People Debate the Constitution, 1787-1788 in the Harvard Law Review:

If Madison is the hero of Ratification, then Patrick Henry is the villain. Henry’s early and vociferous opposition to British efforts in the 1760s to assert greater control over the colonies, which put him at risk of a treason prosecution, had made him a revolutionary icon. In 1787–1788, Henry waged war on the Constitution. Widely regarded as the greatest orator of his age (p. 230), Henry dominated the Virginia ratifying convention, holding the floor for as much as one-quarter of the proceedings and keeping his audience in rapt attention (p. 310). Henry disparaged the Constitution for exalting the power of the federal government, threatening the existence of state governments, and posing an existential threat to individual liberty (pp. 260, 264–66). In his desperation to defeat ratification in Virginia, Henry was not above resorting to personal invective and even outright demagoguery — playing on white Virginians’ paranoia regarding slavery (p. 284).

After failing to defeat ratification of the Constitution in Virginia, Henry promised graciously to accept defeat and become a loyal citizen of the republic. He was lying. Instead, Henry led efforts to secure the sort of structural constitutional amendments, such as limits on Congress’s taxing and war-making powers, that Madison and other Federalists believed would eviscerate the new federal government (pp. 307–08). Madison was convinced that Henry’s real aim was to divide the Union and create a separate southern confederacy (p. 126).

Henry used his formidable political power in Virginia to retaliate against Madison, both to avenge Henry’s defeat at the Virginia ratifying convention and to prevent Madison from seizing control of the project of constitutional amendments (pp. 440–41). In the fall of 1788, after the Confederation Congress declared the Constitution duly ratified and set the date for national elections, Henry announced to the Virginia legislature, which he largely controlled, that anyone favoring federal constitutional amendments should oppose Madison’s selection as U.S. senator and warned that Madison’s selection would mean bloodshed in Virginia. The Virginia legislature proceeded to select two Antifederalists, Richard Henry Lee and William Grayson, as U.S. senators, with Madison coming third in the balloting (p. 440). Still not satisfied, Henry persuaded the legislature to implement an unfavorable gerrymander of the House district that included Madison’s home in Orange County and to pass a law imposing a one-year residency requirement on congressional candidates, which would have precluded Madison from seeking election in a more favorably constituted district (pp. 440–41). Henry and other Antifederalists then recruited the formidable James Monroe to run against Madison. After Madison nonetheless won the election, Henry tried to kill the bill of rights that Madison shepherded through Congress, managing to stalemate the Virginia legislature over its ratification for two years.

Whether or not Patrick Henry was a villain, he is a very interesting figure.  Recently, I read through much of the Virginia Ratification debates.  It is true that Henry spoke a great deal.  His speeches struck me as long on rhetoric and short on substance — a classic windbag.  Yet, the Antifederalists are often hard to understand and certainly Henry had a great reputation at the time, so maybe I am misjudging him.  I would like to read his speeches over again sometime.

According to Thomas Pangle in this excellent Great Courses/Teaching Company course, Henry led one of the three approaches to opposing or seeking changes in the proposed Constitution.  One approach, advocated by Governor George Clinton of NewYork, advocated junking the work of the Philadelphia Convention and starting over again from scratch.   A second approach was championed by Henry, who called for substantial amendments prior to ratification to be drafted in a second convention.   The third approach, which won out, was that of John Hancock, which called for substantial amendments but did not require them prior to ratification.  I hope to have something to say about this issue in the future.  For now, I think there was much to be said for Henry’s approach.

Finally, something most people don’t know about Henry is that he changed his views over time.  Despite his strong states rights orientation, he later became something of a Federalist in part because of his opposition to the Revolution in France.  While Henry did not appear to support the Sedition Act, he did oppose the Virginia and Kentucky Resolutions issued in reaction to them.  I suppose the only consistency here was his opposition to Madison.  When Madison was a nationalist, Henry defended states rights.  When Madison became a Democratic Republican, Henry moved towards the Federalists.

Our Postmodern Bill of Rights

The Constitution is a Bill of Rights