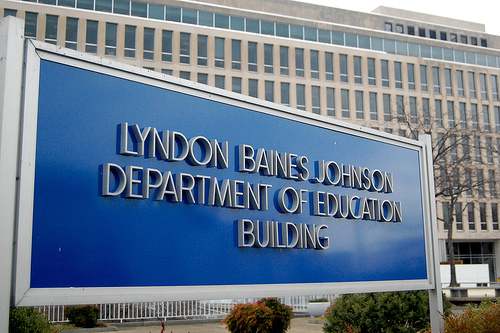 This past Friday, Boston College’s excellent Shep Melnick (interviewed on this site not long ago) gratuitously ruined my weekend by alerting me to the latest “Dear Colleague Letter” (“DCL”) from the Education Department’s Office for Civil Rights (“OCR”). The DCL “shares” OCR’s views on “resource compatibility” at the nation’s schools, district by district. Horrendous in its own right, the letter also prompts broader thoughts on “government by guidance”: it’s a prescription for a banana republic.

The letter outlines OCR’s interpretation of its own “disparate impact” regulations under Title VI of the Civil Rights Act, prohibiting discrimination on the basis of race or national origin in federally funded institutions. It runs over 37 pages, including 63 elaborate endnotes. The DCL systematically conflates “disparate impact” with intentional discrimination; OCR’s investigative methods and tests for both are indistinguishable. And OCR leaves no stone unturned. Its perceived mandate to ensure “resource compatibility” extends to courses, academic programs, and extracurricular activities; teacher effectiveness, the stability of the teacher workforce, teacher qualifications and experience, school leadership, and support staff; instructional materials; and school facilities, including their design and the “overall physical condition of the school, including features such as paint, maintenance of carpet and lockers, and the absence of vandalism.”

All this goes a million miles beyond the requirements of the Constitution; of Title VI; and even of OCR’s own (legally dubious) disparate impact regulations. Yet it can’t be challenged in any court, anywhere: unlike a rule or regulation, it’s not a “final” agency action that’s subject to judicial review. Obviously, though, the DCL is meant to be more than merely helpful: in no uncertain terms, it reminds recipients that OCR can and will investigate suspected evil-doers, including those who have been merely unaware of resource compatibility with respect to paint.

Why do we permit agencies to proceed in this underhanded, unreviewable fashion? The general idea is that in choosing to proceed by “guidance” rather than formal, reviewable regulation, the agency is giving something up: the legally binding effect of its rulings. It’s not really coercing anybody, and so why bother the courts? That answer, however, wildly underestimates government’s ingenuity in giving real-world effect to supposedly informal documents.

The FDA, for example, routinely issues informal “draft” guidance documents that could not conceivably pass judicial muster. (Among other things, they prohibit truthful speech about medical products.) Still, those guidances have served as ammunition to countless private plaintiffs who sue pharmaceutical companies for peddling their products in violation of the guidelines, thus purportedly overbilling Medicaid and Medicare. (These “qui tam” plaintiffs, acting on behalf of the government, get to keep a portion of the recoveries, which now run into billions of dollars.)

That sort of thing can’t happen here. The Supreme Court has held that OCR’s disparate impact regulations are enforceable only by the federal government, not by private parties (here, not qui tam plaintiffs but “statutory beneficiaries.”) At the same time, though, it’s ludicrous to think that OCR itself can implement its guidance. Barely able to respond to instances of actual discrimination, it can’t possibly do carpet inspections across the country and correlate the thread count with race and national origin. So who is going to enforce this?

The “Dear Colleagues”: that’s who. The compliance officers and equity counselors who populate every school district in the country, on account of federal mandates. OCR gives them ammunition:

OCR strongly recommends that school districts proactively assess their policies and practices to ensure that students are receiving educational resources without regard to their race, color, or national origin, including the resources discussed in this letter, as Title VI requires.

Artfully done: while Title VI requires nothing beyond abstaining from intentional race discrimination, the italicized phrase could easily be read to require a proactive self-assessment—and what superintendent would know the difference? And:

Ideally, the district would designate one or more employees to coordinate the district’s compliance with Title VI, including self-assessments of resource comparability. Designating one person responsible for overseeing compliance may aid in identifying and addressing any patterns or systemic problems that arise during the assessment and review of any complaints of discrimination.

Whereupon compliance officers across the country can be heard clearing their throats: I can help. Also, they call their educational consultant-friends and perhaps the local carpet store. And if the superintendent doesn’t play ball, they call OCR. It’s the administrative state and “cooperative federalism” all the way down, and up.

The resourceful among us can exit this lawless, idiotic regime by sending our kids to private schools or moving to school districts that are effectively immune from OCR. (Imagine an OCR “resource compatibility” investigation in Fairfax County or at Langley High: heads would roll. They’re not that stupid.) That takes a lot of money, though. Replicate the m.o. across the full range of government services and regulation: it takes a ton of money to escape. Once you start adopting Juan Peron’s legal model, social patterns will follow. We’re well on our way.

Sex, Sexual Orientation, and the Separation of Powers

Three cases that deal with a powerful federal law pervasive in its influence pose the opportunity to the Court for the takeover of legislative power.

Caldwell's Age of Entitlement argues that the civil rights state is the anvil upon which our nation wages its incessant political contests.

In Bostock, Gorsuch reaches the semi-mystical conclusion that any word or concept having to do with “sex” may constitute “sex discrimination."