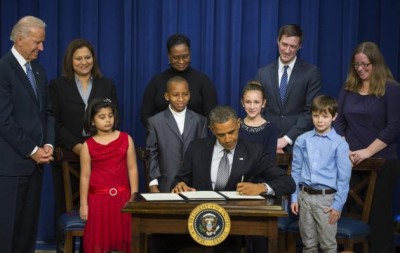 The President has held two news conferences in three days commenting on the coming wave of gun control initiatives.  His presentation has been emotional and properly reflects the anguish that we all feel for the victims of gun crime. It also has been a dazzling display of sophistry. I say that because the President is smart. And if he were not smart, I would say that, so far as his gun ban proposals, his comments were a profound display of ignorance.

Responding to the run on guns precipitated by the preliminary proposals floated by his team, the President said that the motivation must be mainly financial.   Callous capitalism, that other great evil, had prompted unnamed villains to gin up fear of gun bans in order to make profit. The truth is far more basic.

Everyone here is seeking the best route to personal security. Gun people calculate that within the window of imminent threats government is incompetent and they must protect themselves. From the rhetoric, you would think that gun owners or at least NRA members do not have families and children that they love and want to protect.  That of course is absurd.

These people realize the limits of government and have prepared to protect themselves.  Private firearms are central to their approach, and that drives the recent run on guns (and those following Obama’s two elections). If you believe you will lose something essential to one of your core needs, you will scour the market and buy up what you can.  It does not require blandishments from profiteers.

The drumbeat against a politically defined class of semi-automatic firearms very simply accounts for the run on guns that occurred when the President, formerly on the board of the ardently antigun Joyce Foundation, was elected and reelected. People worried that when the opportunity arose, he would pursue the supply control agenda favored by Joyce and others.  This turned out to be a reasonable fear. Because here we are under the name “common sense gun control”, entering a fight about supply restrictions grounded on a bad gun formula that inevitably captures any firearm.

The President professes not to understand why anyone would think his talk of “common sense gun controls”, which apparently includes a ban on more than 200 common semiautomatic firearms, would make people think that he was “after their guns”. Here the President is either ignorant of the logic of the bad gun supply control formula or he is playing a more sophisticated game. He is famously smart so I think he is playing a more sophisticated game.

The bad gun formula at the root of an assault weapons ban raises a basic worry. The formula says we are not attacking gun ownership. We only want to ban the limited category of guns that are used by criminals or madmen.  But there is no such limited category. Criminals and madmen will use whatever guns they can get, and those guns will give them full reign over helpless people as was grotesquely demonstrated in Newtown, Connecticut.

No, no, the President will repeat, we are only after a narrow category of very high risk guns. But that is demonstrably false.  The bad gun formula already has reached well beyond “assault weapons”.

For most of the life of the modern gun control movement, the evil gun that needed banning was the handgun, all handguns.  And following other episodes the cry was to ban long-range, scoped “sniper rifles”, aka every deer rifle ever made.  The surprising thing is that no one has yet put the ubiquitous pump shotgun on the list.  Too soon, maybe.

Pete Shields, founder of Handgun Control Inc., now the Brady Organization, then focusing on handguns, laid out the basic agenda in 1976:

We’re going to have to take one step at a time, and the first step is necessarily – given the political realities-going to be very modest.. …First … to slow down the increasing number of handguns being produced and sold. … Second to get handguns registered. ….. And the final problem is to make the possession of all handguns and all handgun ammunition – [except for military and police ] totally illegal.”

This approach is often articulated by the gun control mantra, “we must do what we can when we can” or as Vice-president Biden recently  said, “just because we can’t do everything is no reason to do nothing.” Sen. Feinstein in the 1994 “assault weapon” debate reflected the same approach saying that she got what she could and if she had had her choice, she would ban them all.

The current bad guns of course are semiautomatic rifles that some people think look scary. But if the gun ban logic is appealing for this small slice of rifles which accounted for some fraction of the 358 homicides with all types of rifles (2010),  how can you resist it for the guns that accounted for the other 8000 or so firearms homicides?  The answer is you can’t.

As I detailed in my last post, if gun bans are your regulatory tool, then you cannot be satisfied banning only scary looking semiautomatic rifles. Many guns are effective substitutes, especially against the helpless.

Ardent gun control advocate Senator Howard Metzenbaum of Ohio openly acknowledged this more than 30 years ago admitting, “unless we ban all of them we might as well ban  none of them.”  The social science on which the policy of supply control is grounded says basically the same thing.  For supply controls to work, you have to drastically cut the supply.

Gun owners who fear the agenda of creeping confiscation are soundly justified. “What we can when we can” is no empty slogan. It was part of the strategy that resulted in the full-scale gun bans that were recently overturned by the United States Supreme Court. When gun owners objected in the 1970s that Washington, D.C.’s gun registration program was never supposed to be used to confiscate guns, they were rebuffed by the bureaucratic response, that “someone else made that promise we didn’t say that”.

Sure, the Supreme Court has said there is a right to keep and bear arms.  But that was a 5-4 decision, and members of the Court, Justice Ginsburg, notably, have openly hoped that a “future wiser court” will reconsider the question.

My starting premise was that the President is very smart. It is certainly true that one can be smart but still ignorant about many things. But that is not the case here for the President. He has been close enough to this issue for long enough that he must appreciate the basic logic of supply controls that Howard Metzenbaum acknowledged 30 years ago.

So I believe he must be pursuing the “get what we can when we can” approach.   Either that or he truly is just seeking a symbolic law that makes a show of having “done something” even though he must realize that a renewed “assault weapon” ban will have no discernible impact on the core problem of how to protect the helpless from madmen with guns. The thing is, on either approach, he is fooling someone.

Post Script:  A separate but truly dazzling display of ignorance about the basic parameters of the gun crime problem is evident in the media reports of the addresses of gun carry permit holders and the threat to publish a full list of owners. One of the TV talking heads justified it on the basis that we report sex offenders so we should report gun owners.  This approach I guess makes sense to people who have the illusion that no one they know owns guns.  But on average 40% of households have guns. So these maps will be an education and will make the “investigative reporting” look silly.  Unfortunately the implications go beyond silliness into the realm of clear hazard.

If you listen just to media reports, you would think that guns used in crimes come mainly from straw sales or the “gun show loophole”.  But these sources account for only a small fraction of the illegal gun supply.  Most crime guns come from a black market that is supplied by theft. On average about 500,000 guns are stolen each year.  So publication of gun owners’ addresses is a wonderful public service …. to gun thieves.

The Connecticut Ruling: Another Attempt to Blame the Gun for Gun Crime

The Second Amendment has been incorporated and, whatever the Connecticut Court would like to believe, it protects the right of Americans to bear arms.

The Miseducation of Danny Glover

It is heartening that Danny Glover has read Carl Bogus' work on the Second Amendment, but there is a lot more to the story than what Bogus offers.

Gunning for the NRA

The NRA has come to symbolize the Left’s hatred of guns, Donald Trump, and the “deplorables” they imagine comprise NRA members.