Editor’s Note: This is the first of two posts that will offer contrasting opinions on the NSA electronic surveillance programs. Angelo Codevilla’s essay will appear tomorrow.

On July 24th, 2013, the United States House of Representatives defeated an amendment to the Defense Department’s Appropriations bill for fiscal year 2014 that called for greater restrictions on the National Security Agency’s ability to gather electronic information, including phone records of American citizens. Ninety-four Republicans and 111 House Democrats voted in favor of the amendment, while 134 Republicans and 83 Democrats voted against it. The amendment’s sponsors shared very little in common, other than the fact that they are both from Michigan. Republican Justin Amash, a devotee of free markets and limited government, joined forces with John Conyers, a perennial opponent of American foreign and defense policy since he was first elected to Congress in 1964. Conyers is a devoted leftist; for instance, he attempted to impeach President Ronald Reagan for the invasion of Grenada, and he proposed in 2004 that Ohio’s electoral votes for George W. Bush not be counted because officials in the Buckeye State stole the election.

The Amash-Conyers amendment was defeated by a vote of 217-205, yet in defeat it was hailed in the media as an example of “bipartisanship,” meaning that Republicans finally embraced long-standing positions of the Democratic Party. The significance of this vote should not be underestimated – throughout much of the Cold War and the “War on Terror” the Republican Party defended executive prerogatives over national security and the intelligence community in particular. This defense, once a given, seems to be withering away among the new breed of younger, libertarian Republicans.

The most troubling aspect of this reversal is the claim made by Justin Amash that his effort to rein-in the American intelligence community is in concert with the intentions of the founding fathers. Amash and many of his fellow House Republicans seem to be men of principle, and their commitment to the Constitution (as they understand it) seems genuine, and needless to say, it marks a refreshing change from the disregard for the Constitution found on the other side of the aisle. But their understanding of American history, particularly regarding the intentions of the framers of the Constitution, is as misguided as that of John Conyers or the late Senator Frank Church. 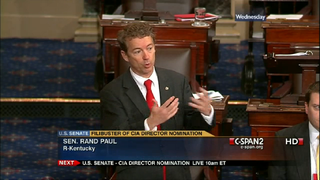 Whether they know it or not, Congressman Amash and Senator Rand Paul are reciting from the Vietnam-era hymnal of Frank Church and all those on the left who saw the United States government, particularly the secretive arms of that government, as a force for reaction abroad and the creator of an “Orwellian” police state at home. Rand Paul frequently refers to our “imperial presidency” and claims that “our founding fathers” would be opposed to various tactics employed by the Bush and Obama administrations in the war on terror. Amash argues that “if you think there are ‘zero privacy violations’ in an NSA program that collects the phone data of all Americans, then you don’t know what ‘privacy’ means.” Amash sees the United States as “a surveillance state” whose government has “unrestricted power to spy on U.S. citizens.” Amash’s over-the-top rhetoric verges on the paranoid, as when he characterized the efforts of the White House and the Director of the NSA, General Keith Alexander, to block his amendment: “The U.S. government has come out in full force against you, the American people. I will always stand with you.” Might General Alexander rightly believe that he also has the interest of the American people at heart, keeping in mind the intelligence failures associated with 9/11?

The “privacy” that Amash speaks of is the privacy of the Warren Court emanating from Justice William O. Douglas’s infamous penumbra. This is not your founding father’s privacy. This is the “privacy” of absolutists like the American Civil Liberties Union, whose “national security” legislative director describes Amash as “super smart.” The ACLU to the contrary, Congressman Amash and Senator Rand Paul seem to lack a basic understanding of American history, especially regarding the founding fathers and national security. Justin Amash and Rand Paul are free to argue for an absolutist interpretation of privacy, which is all well and good, but enlisting the founding fathers in support of this position is a distortion of history. The founding fathers were averse to transparency (as their secret drafting of the Constitution reveals), were opposed to congressional oversight of intelligence operations, and believed that in the Byzantine world of international relations America’s defense rested in part on the use of clandestine operations. This defense, by the way, was designed to protect American liberty.

A few examples of the principles and practices of the founding fathers will suffice for now: General George Washington approved of mail openings because of the “innumerable advantages” that arise from such an act, and he went so far as to provide instructions on successful mail opening techniques: “contrive a means of opening them [letters] without breaking the seals, take copies of the contents, and then let them go on.” Washington was not alone in believing in this method of eavesdropping; Thomas Jefferson, Benjamin Franklin, and John Adams served on a committee charged with disseminating excerpts from intercepted mail for propaganda purposes. In his First Annual Message to Congress President Washington requested and ultimately won approval for a Secret Service Fund which was exempt from traditional congressional oversight (it allowed the president to spend money for services of a sensitive nature without revealing to Congress how those monies were spent). The approval of this Secret Service fund in 1790 came with an assist in the House of Representatives from Congressman James Madison, “the father of the Constitution.”

Jefferson claimed that “all nations have found it necessary, that for the advantageous conduct of their affairs” certain secrets should “remain known to their executive functionary only,” building on an earlier statement, in case the point was missed, that the Senate “is not supposed by the Constitution to be acquainted with the concerns of the executive department.” Jefferson’s conception of executive power would have undoubtedly inflamed Congressman Amash and Senator Paul, along with the editorial board at The New York Times, especially when the Sage of Monticello observed that “on great occasions every good officer must be ready to risk himself in going beyond the strict line of the law” if necessity so required.

The naïve views of Frank Church, Justin Amash, Rand Paul, Glenn Greenwald, and countless others were rejected by the American founders – they did not believe that by applying restrictions to American conduct the rest of the world would leave us alone and mimic our conception of the “rules” of international engagement. Madison wrote in Federalist # 41 “If a federal Constitution could chain the ambition or set bounds to the exertions of all other nations, then indeed might it prudently chain the discretion of its own government, and set bounds to the exertions for its own safety. . . . The means of security can only be regulated by the means and the danger of attack. They will, in fact, be ever determined by these rules and by no others.” If Amash, Paul, and Greenwald would set aside their misty-eyed notions of the founding fathers and grasp that a more complicated constitutional order lies beneath the one discussed in high school civics class, then we might begin to have an intelligent debate on this important subject.

The Ruling Ties That Bind

The Framers, very cognizant of history, sought to frame a constitution that successfully balanced self-government and liberty.