A lot has been said about Arizona’s SB 1062, vetoed by Arizona Gov. Brewer. Some see it as a bellwether of “growing threats to religious liberty,” others as a debate “captured by utterly intolerant people on both sides” with many seeking “liberty for me, and [to have their] opponent ground into the dust.” Marriage equality advocates see SB 1062 as, at best, a “misguided attempt to preserve an outdated social order;” at worst, a license to discriminate.

Lost in the aftermath is the fact that SB 1062 was a very different animal from the primary context in which religious liberty exemptions have emerged—namely, same-sex marriage legislation. There, the big lesson is that bargaining and mutual benefit can expand liberty for both sides. Legislation succeeds when it delivers important gains to both sides, unlike one-sided measures, like SB 1062.

SB 1062 would have amended Arizona’s Religious Freedom of Restoration Act or “RFRA” to speak definitively to a question that has split the courts: namely, whether commercial businesses sued by another citizen even qualify for RFRA protection. Despite the rhetoric around SB 1062, RFRAs are plain-vanilla legislation originally designed to respond to government overreaching in contexts far removed from gay rights, like whether the state may demand that the Amish put orange, not grey, triangles on their buggies or that cemeteries remove religious symbols from grave markers.

Commentators, the media, and the public took this arcane legal question to mean that businesses could turn away lesbians and gays for any reason or none at all—and that those businesses would always win because of RFRA. That fundamental misunderstanding was fostered, ironically, by some religious liberty advocates, who said they needed the amendment to “stave off … gay rights.’”

Now, to be clear, there were no gay rights in Arizona state law to stave off or somehow contain. Arizona does not ban Sexual Orientation discrimination in housing, employment, or public accommodations, even though certain of its municipalities provide this protection.

The project of bolstering religious liberty went off the rails in Arizona precisely because religious liberty advocates did not seek a more balanced measure. Legislators could have granted the LGBT community the same protections enjoyed by the rest of us in the same piece of legislation that was supposed to clarify whether businesses may claim protection under RFRA.

While Arizona did not ban sexual orientation discrimination, every state that has recognized same-sex marriage by legislation to date, the Enacting Jurisdictions shown in Figure 1 in blue, did have such a preexisting ban. And every Enacting Jurisdiction included meaningful, although imperfect, religious liberty protection for religious objectors. 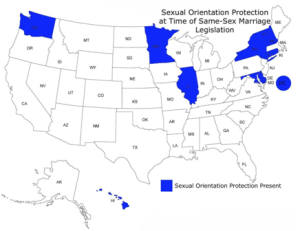 Why? Because absent those protections, nondiscrimination laws that were designed to secure equal treatment in the market place for commercial services like buying burgers, hailing taxis, or renting apartments would spill over to a religiously freighted and deeply personal matter, facilitating another’s marriage. With burgers and taxis, a refusal can only reflect animus towards the individual denied the service because burgers have no moral or religious content. Marriage, by contrast, is, for many, a religious sacrament and has been for centuries.

Because legislators in the Enacting Jurisdictions did not intend to treat the refusal to facilitate a marriage like a refusal to serve a burger, they clarified this in the same piece of legislation that made marriage equality a reality, as Figure 2 shows in green.

The Enacting Jurisdictions protect refusals to facilitate another’s marriage when doing so would violate deeply held religious convictions, although the laws differ in who they seek to protect. Delaware, in light green, gives protections only to individuals, while the remaining jurisdictions, in dark green, accord protections to organizations, with some jurisdictions explicitly reaching employees. The protections given to religious objectors extend only to marriage and provide no other basis for refusing to serve lesbian and gays. 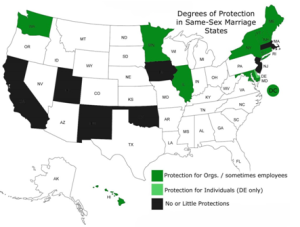 In contrast with the Enacting Jurisdictions, in states that have recognized same-sex marriage by judicial decision alone, there are no additional religious liberty protections, shown in black. This should surprise no one because it is not the court’s role to protect third parties to the litigation that resulted in same-sex marriage recognition. Of course, some of the judicial decision states provided insulation to religious objectors in the state’s preexisting non-discrimination statute.

Figure 3 details the kind of protections given. All Enacting Jurisdictions protect the clergy, who simply do not need protection because of the First Amendment (column 1), and all but one go further and protect religious organizations, sometimes explicitly including their employees (column 2). Importantly, covered objectors are protected from private suit everywhere and, nearly everywhere, from government penalty like the denial of grants or the right to contact with the state (column 3). 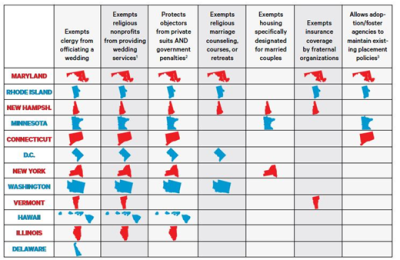 There the core protections among the states end and an a la carte menu of protections emerges. Some jurisdictions protect religious marriage counseling (column 4); some, married student housing (column 5); and others religiously affiliated fraternal organizations (column 6). Some protect religious social services agencies, like Catholic Charities (column 7). One state, Delaware, protects individuals out in the world, not just inside religious organizations (not shown in Figure 3). Delaware allows a sitting Justice of the Peace or Judge to refuse to celebrate any marriage—without risking her job.

One way to envision these protections is moving out from the church sanctuary, as Figure 4 shows, to church-owned or affiliated property. Beyond this are church affiliated non-profits at the coal face of society, like social service providers. One step further out would be public employees and justices of the peace and judges, who receive protection in Delaware. Finally, we come to the nub of the debate in Arizona, actual commercial businesses. No Enacting Jurisdiction has reached this far. The proposed exemptions urged by a group of scholars that includes me and a number of others would reach wedding industry professionals, but only for refusals to celebrate the wedding, and then only if small businesses with 5 employees or less. Even then we believe that the right to refuse must be qualified by hardship to same-sex couples. 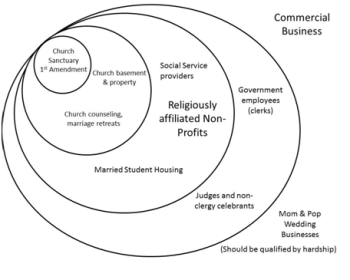 Scalia’s Genius and His Curse