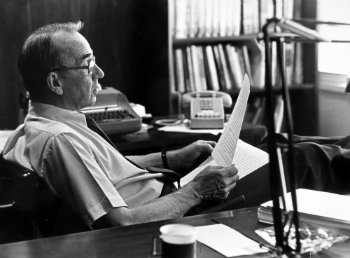 This past Saturday, Walter Berns died at the age of 95.

Walter Berns was one of the truly great constitutional scholars and political theorists of his generation, or any generation since. A student of Leo Strauss’s, he taught at Louisiana State University, Yale University, and (beginning in 1959) in Cornell University’s Department of Government, which he chaired for several years.  He resigned his position in 1969, when a feckless university administration caved in to armed thugs who had occupied university buildings. Cornell exposed faculty members who urged a defense of liberal education and resistance to mob rule—Walter Berns and Allan Bloom prominent among them—to relentless attacks. Walter Berns moved to the University of Toronto and, in 1979, to Washington, D.C., to Georgetown University and the American Enterprise Institute (AEI).

Having met Professor Berns occasionally, I had the great fortune of becoming his colleague when I joined AEI in 2000.  We were housed on what in those glory days was the tenth floor “smokers’ row,” alongside Irving Kristol, Robert Bork, and Hillel Fradkin, Walter Berns’s son-in-law. “Wow” was my reaction, tobacco consumption being the only thing that qualified me for that company. To me as to countless others, Walter Berns was an infinitely kind, generous, and inspiring teacher, mentor, and friend. (At age 90 or so he provided trenchant comments on early drafts of  The Upside-Down Constitution, which owes quite a bit to his way of thinking.) Plus, he was simply great fun to be around. I’ll miss him dearly.

A guide to Walter Berns’s work is here, with an introduction by his student (and my once-teacher and now-colleague) Jeremy Rabkin. A 2011 AEI event dedicated to Walter Berns’s study of the Constitution—with introductory remarks by his long-time friend and poker companion, Justice Antonin Scalia—is here.

There will be many occasions to celebrate Walter Berns’s scholarship over the coming months. For now, his many grateful friends and students mourn the passing of a great man—and celebrate a long life exceptionally well lived.

The Political Thought of Walter Berns

Walter Berns should have an influence among future students, teachers, and devotees of American constitutional democracy.

A Question of Patriotism

Willmoore Kendall’s voice is now the most pressing for our contemporary republican order.