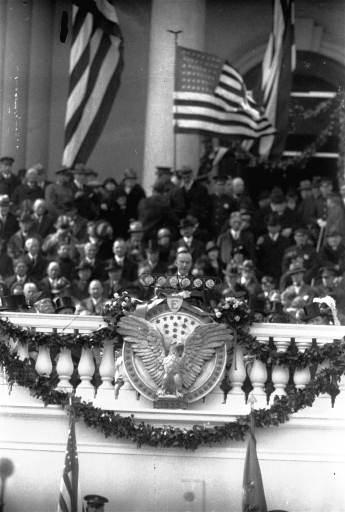 In his new book, Why Coolidge Matters: Leadership Lessons from America’s Most Underrated President, Charles C. Johnson claims that ‘Silent Cal’ wasn’t so much silent as he was silenced. But today, thirty years since Tom Silver’s underrated book about America’s underrated thirtieth president, Coolidge and the Historians, that is changing. In addition to Johnson’s book, we also have Amity Shlaes’s new biography, Coolidge, a prequel of sorts to her bestseller, The Forgotten Man: A New History of the Great Depression. Undoubtedly, there is growing interest in Coolidge that, although somewhat delayed, is especially timely for the present. Here are six lessons for President Obama from the not-so-silent Cal Coolidge.

For Obama, more legislation is often the answer to our problems, whether it’s gun control, health care reform, or the economy. Obama’s roughshod push for the economic stimulus and various government bailouts reflected that same abiding faith in the healing power of legislation.

Coolidge, in a speech called Have Faith in Massachusetts, expressed a different idea: “Don’t hurry to legislate.” There are natural limitations to what human law can accomplish, and we should not delude ourselves with false expectations. “There is danger of disappointment and disaster,” Coolidge said, unless we understand and appreciate what law can and cannot do. What legislation cannot do, and should not attempt to do, is provide “some short cut to perfection.” As we saw recently during the gun control debate, “When legislation fails, those who look upon it as a sovereign remedy simply cry out for more legislation.”

Invoking the American founders, Coolidge often argued that law “loses its sanctity and authority” when it is “changed and changeable on slight provocation.” In other words, in order to inculcate respect and reverence for the rule of law, reform should be a difficult and arduous task, requiring much time and extensive deliberation. “It is much more important,” Coolidge said, “to kill bad bills than to pass good ones,” because there is no immediate remedy and complete solution in any act of Congress. “There is no magic in government,” he cautioned.

If the public mind rests in the belief that there can be no limit to what the law can accomplish, there will also be no limit to what our elected officials will promise. This is well demonstrated by Obama’s grand claim that his election would be “the moment when the rise of the oceans began to slow and our planet began to heal.”

“The country,” Coolidge said, “cannot be run on the promise of what it will do for the people.” “[A] sound and wise statesmanship,” he explained, “will undoubtedly find itself displaced by that type of public official who promises much, talks much, legislates much, expends much, but accomplishes little.” In that case, “The deliberate, sound judgment of the country is likely to find it has been superseded by a popular whim.” Coolidge here offers a warning against the very type of president that Obama proved to be.

More than any other issue, Obama could use a good lesson from ‘Silent Cal’ Coolidge on the issue of economy. As Amity Shlaes astutely notes, Coolidge “did not say ‘savings’; he said ‘thrift’ or ‘economy.’ Indeed, he especially cherished the word ‘economy’ because it came from the Greek for ‘household.’ To Coolidge the national household resembled the family household.” In other words, Coolidge used old words with their old meanings, and economy meant living within your means. In his Autobiography, Coolidge wrote, “There is no dignity quite so impressive, and no independence quite so important, as living within your means.”

Coolidge, the last president to pay down the national debt, would be aghast at the nation’s current sixteen trillion dollar debt and record deficits. While the Coolidge era enjoyed unprecedented prosperity—low unemployment, high wages, and low cost of living—the economic picture in the age of Obama continues to look bleak. The style of household management Coolidge brought to the national government saved money, yes, but he always saw the larger point – his purpose was “to save people,” not dollars. A strong economy could satisfy the American people in a way new legislation and empty political promises never could. For that reason, Coolidge said, “After order and liberty, economy is one of the highest essentials of a free government.” 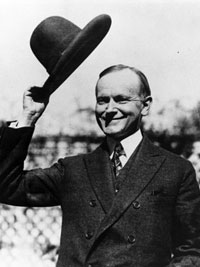 4. “Don’t expect to build up the weak by pulling down the strong.”

Obama’s tired, repeated claim that the wealthy need to pay their fair share and give just a little more hasn’t gone away, even after his recent tax hikes. Obama argues that his policies give everyone “a fair shot,” only if they’re willing to “work hard” and “play by the rules.” He will not build up the weak unless they’re willing, in other words. But Obama has never spoken a word against pulling down the strong, whether they’re willing or not.

Coolidge was one of the first presidents to deal with the income tax after the sixteenth amendment was ratified in 1913. Under Coolidge, the surtax was lowered across the board, while the minimum income subject to that tax was raised to $10,000 in 1924 – equal to more than $130,000 today! By 1927 most Americans paid no federal income tax. As a result, revenues increased, the debt was reduced, and the standard of living was higher than at any point in American history.

Some politicians, Coolidge warned, “advocate a complete change…toward property rights” and propose “extended government control and regulation and a radical change in the theory of taxation. The fundamental purpose [is] more equal distribution of the results of industry.” But no other country, Coolidge informs us, ever approached America in general and public prosperity, not because we “spread the wealth around,” as Obama calls it, but because here we have learned “the fact that if production be encouraged and increased, then distribution fairly well takes care of itself.”

5. The Meaning of Progress.

Obama claims to be a progressive. Coolidge supported several early progressive measures, such as the direct election of US senators, women’s suffrage, and child labor laws. But Coolidge, unlike Obama, was no progressive. Coolidge supported progress, but progress properly understood. For him, progress did not necessitate the abandonment or transformation of our founding principles, as Obama claimed in his second inaugural address when he said our “solemn duty and awesome joy” is to “answer the call of history” and make “ourselves anew,” i.e. “fundamentally transform” the nation, as he has so often promised. Rather, Coolidge argued, “No people can look forward who do not look backward. The strongest guarantee of the future is the past.”

Coolidge was not looking to return to the days of “horses and bayonets,” as Obama has joked. “We review the past,” he said, “not in order that we may return to it but that we may find in what direction, straight and clear, it points into the future.” Several of Coolidge’s speeches read like short history lessons, tracing the path of civilization from the Greeks and the Romans, to the Pilgrims and the Puritans, to Washington and Lincoln. To Coolidge, the history of western civilization culminated in the American founding.

Coolidge cautions that some designing and impatient leaders would have us depart from that path, seeking to “turn from a certainty, tested by time, approved by experience, to some vague experiment.” “[I]t is not a change that is needed” in our founding principles, he said, “so much as there is need of living in accordance with them.” To do that, “We must search out and think the thoughts of those who established our institutions.” We must understand the founders as they understood themselves, in other words.

In dedication to the 150th anniversary of the Declaration of Independence, the only president who shared a birthday with the nation shared the true meaning of progress:

About the Declaration there is a finality that is exceedingly restful. It is often asserted that the world has made a great deal of progress since 1776, that we have had new thoughts and experiences which have given us a great advance over the people of that day, and that we may well discard their conclusions for something more modern…[But] no progress can be made beyond these propositions. If anyone wishes to deny their truth or their soundness, the only direction in which he can proceed historically is not forward, but backward…Those who wish to proceed in that direction can not lay claim to progress. They are reactionary. Their ideas are not more modern, but more ancient, than those of the Revolutionary fathers.

In his Autobiography, Coolidge wrote, “It is a great advantage to a President, and a major source of safety to the country, for him to know that he is not a great man. When a man begins to feel that he is the only one who can lead in this republic, he is guilty of treason to the spirit of our institutions.” Coolidge had the prudence to wait until after leaving the presidency to write the story of his life. This represented the common sense of the common man from the Commonwealth of Massachusetts. Obama, in contrast, published two autobiographies even before entering the presidency.

Not-so-silent Cal Coolidge, the last president to write his own speeches, still speaks in his own voice today. Obama should listen, and try silence for once.

Federalism, Yet Again: Views From the Citadel

How to Think About Roe v. Wade After 40 Years

The “1619 Project” can deliver on its promissory only by enslaving free labor.