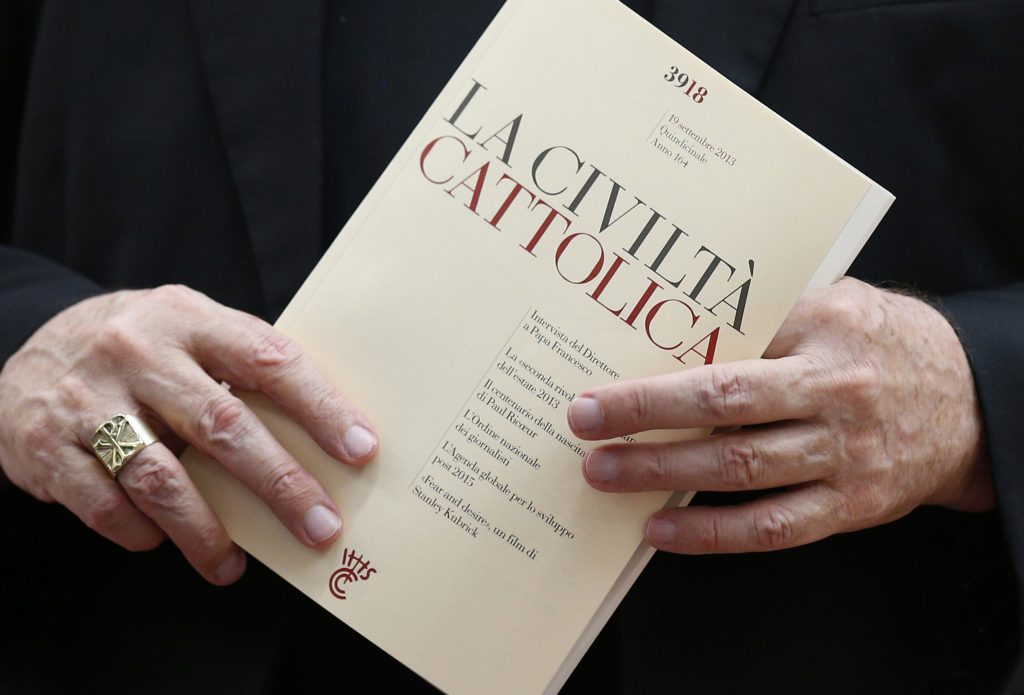 Antonio Spadaro and Marcelo Figueroa’s article, “Evangelical Fundamentalism and Catholic Integralism: A Surprising Ecumenism,” in La Civiltà Cattolica (described by Spadaro as a “peer-reviewed magazine” whose “articles are always read and approved by the [Vatican’s] Secretariat of State”) is a bungled opportunity. The stark Manichean colors with which they paint their subject, and the apocalyptic tones they sound, combined with a muddled understanding of different currents in American evangelicalism, obscures rather than illuminates their argument.

The irony is that Spadaro and Figueroa succumb to the Manichean temptations, and apocalyptic rhetoric, which they ascribe to their subjects. We’ll return to that in a moment. The point I think they try to make, but lose in their ham-handed argument, is that conservative Christians in the U.S. need to be wary that, in the heat of political battle, political commitments don’t efface their more-important spiritual commitments. This is a temptation to which American evangelicalism, in particular, too-easily succumbs, and seems also to be a risk for a segment of American Catholicism today. (Politically Progressive American Christians have their own idols as well, but of a different ilk than Christian conservatives.)

First, Spadaro and Figueroa charge their subjects with political Manichaenism. I prefer the term be used to describe dualistic religious views in which good and evil are equally powerful. While there is a tendency towards forms of Manichaenism in the folk-spirituality of many American Christians (and is ubiquitous in Hollywood films portraying supernatural evil), these Christians typically are highly pietistic, and not particularly political.

Spadaro and Figueroa use the adjective not to identify any real Manichean heresy, however, but instead to communicate their disapproval of the rhetorical use of what they consider over simplified black and white moral categories.

Before we get to their argument, one must note the irony of Spadaro and Figueroa’s article is that there is no gray in their treatment of those they accuse of Manichaenism. It’s all just black and white for them as well; just absolute good versus absolute evil. The only difference is what they condemn as absolute good and absolute evil.

Oddly, however, Spadaro and Figueroa do not actually provide religious examples of the simplified moral discourse they condemn among Christians. They instead use as evidence for their point George W. Bush’s reference to an “axis of evil,” and Donald Trump’s willingness to characterize certain people as “bad” or “very bad.”

Given the large swaths of the world that, for Bush, fell neither into a category of absolute good or of absolute evil, his designation of North Korea, Iran, and Iraq as “evil” does not betoken any form of political Manichaenism. It was not an all-encompassing categorization. Indeed, it’s more Manichean to force Bush’s comment into that category than his comment illustrates the category. Trump, on the other hand, does sort the world into people who are “good” and people who are “bad.” But even for him those are not absolute categories, but are flexible and permeable. They reflect his assessment of the most recent thing someone said of him. When one criticizes, then one is “bad,” but when that same person then praises, that person is now “good.” While they are simplistic categories, they do not take on the absolutistic judgments of even a figuratively appropriate use of “Manichean.”

For Spadaro and Figueroa, it seems as though one is a Manichean if one holds different moral or political judgments than they do. Indeed, it almost seems as though they define Manichaenism as anyone who might hold a moral absolute (aside, that is, from the absolute that there are no absolutes).

Spadaro and Figueroa’s discussion of apocalypticism fairs little better. First the mistake: They discuss the apocalypticism of the work of the late R.J. Rushdoony, the father of “Christian Reconstructionism” which is also often called “dominion theology.” They compare his views to “the theopolitics spread by Isis” which “is based on the same cult of an apocalypse that needs to be brought about as soon as possible.”

To be sure, there is a disturbing Sharia-like aspect to Rushdoony’s work in his argument that the state needs to follow “Biblical law,” by which he means mainly the Law of Moses in the Old Testament. (I’m guessing that Paul’s Epistle to the Galatians was not particularly dog-eared in Rushdoony’s Bible.) But contrary to Spadaro and Figueroa’s claims, Rushdoony did not join his eccentric view of Biblical law with any form of apocalypticism. Indeed, unlike the vast majority of American evangelicals today, Rushdoony did not believe that Christ’s return was imminent. Rushdoony was a convinced “postmillennialist.” He thought that the world would gradually grow more Christian over the centuries, or even over the millennia, and then would Jesus return, at the very end of history. For Rushdoony, Jesus’ return might not happen for thousands, perhaps not even for hundreds of thousands, of years. There was no modern-day crisis in Rushdoony’s eschatology.

Beyond that, though, and again contrary to Spadaro and Figueroa, I’m unsure Rushdoony’s influence, even while he was alive, extended much beyond small sects of “hole and corner” Christianity in the U.S. And even that influence dissipated after his death. I know of no important evangelical leader, let alone a political leader, who articulates any form of Rushdoony’s eccentric view of “Biblical law.”

As I mentioned, however, American evangelicals are indeed overwhelmingly apocalyptic in their eschatological beliefs, even if not derived from, or combined with, Rushdoony’s theonomy. Historically, however, apocalypticism tends toward political quietism rather than political activism. After all, why polish brass on what you think is a sinking ship? Aside from outsized support for the state of Israel among U.S. evangelicals, I know of no distinct policy implication from their apocalypticism.

Spadaro and Figueroa also throw in a discussion of the “Prosperity gospel,” and of support of evangelicals (and conservative Catholics) for expanded judicial protection for religious liberty. All of this is mixed together and served in a potpourri of condemnation. The irony again is that Spadaro and Figueroa expend no effort to understand sympathetically what might be motivating the U.S. Christians they condemn. They condemn them in black and white, in, dare I say, Manichean terms.

They describe the Catholics and evangelicals they oppose as being joined in an “ecumenism of hate.”

Of course, if they did not use the extreme language they do, then it is doubtful their article would have received the attention it did. Still, one might expect two Christian pastors to be, well, rather more pastoral in their orientation, “with gentleness correcting those who are in opposition,” as the apostle Paul instructed the young pastor, Timothy.

As I mentioned at the start, however, I do think there are reasons to be concerned about the influence of the politicization of Christianity in and on American Christians and American churches. But given their muddle of analysis, and their inaccurate, poorly-evidenced, and over-the-top language, Spadaro and Figueroa don’t help with that discussion.

The Age of Macron

Show Me the Way to Poverty

The Catholic Dilemma: Exit, or Voice and Loyalty?

Pope Francis' restriction the celebration of the traditional Latin Mass is to ensure the unity of the Church.

The Gospel According to Marx?

From Mikhail Gorbachev, all the way back to Karl Kautsky, socialists have long claimed that early Christianity was a utopia guided by collectivism.