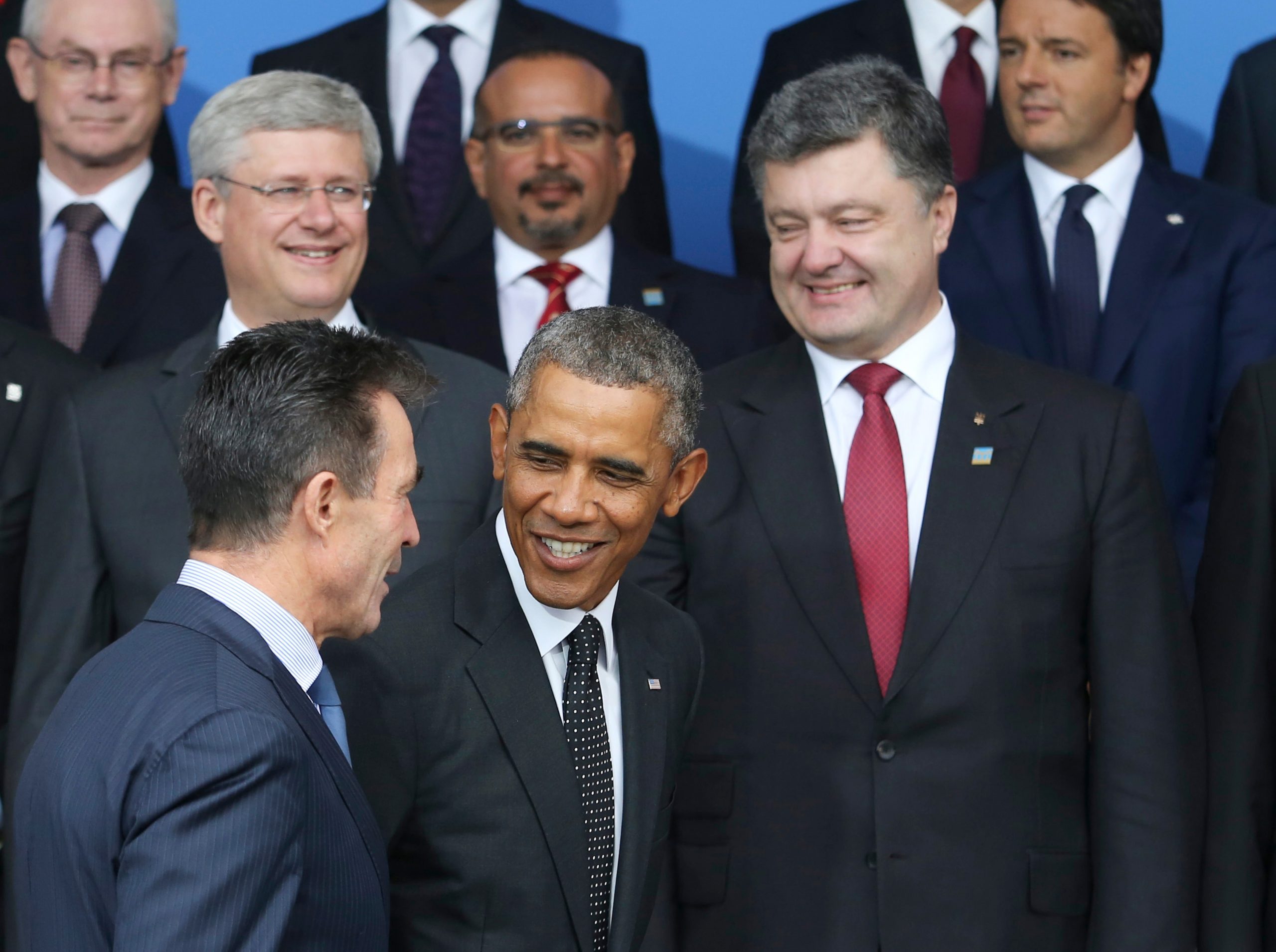 The contrast between Vladimir Putin’s actions toward Ukraine in 2014 and the words and deeds of Western leaders led by Barack Obama is pregnant with illustrations of the difference between statesmen who know how to wield the instruments of power and politicians who merely pretend.

As Ukraine has struggled to free itself from Russia’s grasp and to beat off Vladimir Putin’s armored brigades, the U.S. government has given the embattled Ukrainians blankets and military rations (Meals Ready To Eat.) Last week Ukraine’s President Petro Poroshenko, trying to shame the Congress into providing surveillance drones, antitank weapons, guns, and satellite imagery, asked how one goes about fighting a war with blankets. But, the previous week, President Obama had already addressed the question: “we do very little trade with Ukraine and geopolitically, it doesn’t –what happens in Ukraine doesn’t pose a direct threat to us.” Ukraine’s insignificance to us would explain letting Putin have his way with it.

But it would not explain Obama’s and other Western leaders’ statements, beginning last winter, supporting the people of Ukraine as they overthrew their Russian-leaning dictator Viktor Yanukovich, intending to cast off Russian dominance and to join the West. Nor does it explain their fiery threats of socio-economic isolation when Russia sent masked men to seize key points in Ukrainian Crimea or their talk of escalating sanctions if Russia did not desist in its assault on Ukraine.

In fact these words of support for Ukraine were premised on the incontestable fact that, for Russia, possession of Ukraine is the key to dominating Eastern Europe and the difference between being a peripheral European power and being a world power.

But the interesting question is why Obama and his European counterparts now have dropped the Ukrainian cause, cold, in word as well as in deed. The answer – wherein lie lessons for all of us – is that Obama & co. talked a big game so long as the confrontation between Russia and Ukraine might have been imagined to be taking place on the level of posturing and pretense. The moment it became clear that Putin was serious the West, led by America and Germany, added weight to Putin’s victory by following brayed opposition with meek acquiescence.

This past week Ukraine’s parliament, elected by a people who hate Russia and yearn for the West, nevertheless voted to delay closer relations with the West. By also recognizing, immediately, Russia’s sway over its eastern regions while allowing those regions to continue influencing the rest of the country, the parliament conceded to Russia a special role in Ukraine. In short, the parliament gave Russia what it had wanted from the deposed dictator, and more. How Russia got its way in Ukraine is as pregnant with lessons about the use of power as it is with consequences for Europe and for us.

As I have argued previously herein, Putin’s objective never was to conquer and occupy all of Ukraine because that is beyond his army’s capacity and would expose Russia to a ferocious insurgency. Nor was it ever to annex Ukraine’s Eastern ethnically Russian regions because, without them, Ukraine would be unshakably Catholic, Western, and anti Russian. In such a country, Russia would have no levers to pull. Rather, his objective was and remains to take over all of Ukraine politically by maneuvering the united forces of the Russian East against the Western regions’ divided politicians.

Hence, initially he sent thugs in black leather jerkins (the KGB’s hallmark since 1917) and no insignia less to fight than to frighten the Ukrainian government into granting special autonomy to the Eastern regions and to recognizing Putin’s men as the sovereigns thereof.

The use of paramilitary forces is a political rather than a military tactic. But the first truth of unconventional forces is that they cannot defend themselves against conventional ones. The moment that those attacked by unconventional forces reflect on the fact that the enemy did not send the regulars, defeating the forces at hand usually turns out to be relatively easy. Thus, as the spring of 2014 turned to summer, the Ukrainian government decided to fight the forces actually arrayed against it with the forces it actually has in hand, meager though they be. By July, Ukrainian troops were killing the “separatists” by the hundreds, and Putin was making polite requests for ceasefire and for normal relations with a regime that he had denounced just weeks before. His covert action had reached a dead end.

And then on July 17, Russian regular forces that had been bolstering their irregulars mistakenly shot down Malaysian airline flight 17 on a regular international route over the Ukraine, killing the 298 innocents aboard. The so-called international community’s underwhelming reaction underlined its impotence and may well have led Putin to ask why he should hold back from whatever action might be required to force the Ukrainians into line.

As August began, Putin dispensed with pretense. Russian combat brigades led by tanks moved into Ukraine, occupied a land bridge to the previously occupied Crimea, and reinforced the irregulars’ garrisons in major Eastern cities. Ukraine pleaded more ardently than ever for Western help, which Westerners denied more firmly than ever. By the time Putin met with Ukrainian president Petro Poroshenko on August 26, he held all the cards and administered a “tough talk.”

The Ukrainians’ last hope vanished when Western leaders, meeting at the September 4-5 NATO summit, issued meaningless declarations of support for Ukraine, refusing to supply arms or enforce sanctions. This faux outrage occurred while Russia’s armored columns were driving deeper into Ukraine. Under the circumstances, their announcement of their intention to create an international “spearhead force” of some 4,000 men whose equipment would be pre-positioned somewhere in Eastern Europe (but the men would not be there) occasioned speculation about how many hours it would take for this force’s personnel, were they ever to be deployed against Russia in Eastern Europe, to end up dead or as prisoners.

For Ukraine, the choice became to surrender now or surrender later. It agreed to Russia’s terms in the hope of cutting its losses. The result left Putin with significant power over the future of Ukraine and therefore over that of the rest of former Soviet space as well.

The result also seemed to remove whatever doubt may have remained about the competence and honor of the present generation of Western statesmen. The vital question for us is how to improve their successors.

A Grand Confusion of Language and of Understanding

Putin performed at the level of John F, Kennedy, while the Ukrainians are giving a good imitation of Fidel Castro.

Is Putin a New Hero of the Right?