In a temporary obsession over the mysteries of interstate taxation (a subject of forthcoming posts—skip alert!), I missed an important event until my twelve-year-old reminded me today: on September 23, Bruce Springsteen turned 65. Happy birthday, and God bless! And do let’s celebrate. 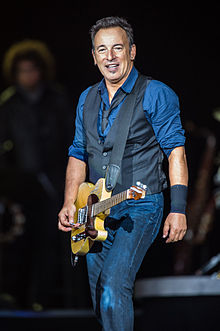 Mick Jagger famously intoned that he’d rather be dead than sing “Satisfaction” at 45; how’s that working out for you, Mr. Geezer? Mr. Ezekiel Emanuel, who’s not much into revving up young people but would rather have government force them to subsidize others, wants to be dead at 75; let’s see how that plays out. Say about the Boss, his music, and his politics what you will: every single line he’s ever written and every single thing he’s done stands as a reproach against that sort of stupidity and brutal contempt for life. Pour me a drink, Teresa: I count the bones in your back/like the stations of the cross. Wow. Danny Federici is long dead, and so is Clarence. But Mr. Springsteen won’t let fans forget them, in the unlikely event that they might.

The folks who call in to E-Street radio all have their own favorite songs and recollections; so do the Greves. At home, we solve incipient conflicts by accommodating everyone’s first preference. Here’s mine. Shhhh.

The Truth is Marching On

Man at the Top

The milestone album Born to Run made Springsteen a star, selling millions of copies upon its release in 1975. It was the work of a deeply spiritual poet.

And the Wall Fell

I can tell you when I knew the game was up for those hacks in the East.