Editor’s Note: This essay is part of Advanced Manufacturing: A Law and Liberty Symposium

To begin with its strengths, William B. Bonvillian and Peter L. Singer’s Advanced Manufacturing: The New American Innovation Policies is a sophisticated, well-researched and highly plausible account of the decline of U.S. manufacturing and its political consequences.

Advanced Manufacturing appeals to the sense that we need a big picture industrial plan, that the dominant narratives about American manufacturing aren’t really true. Moreover, the book offers an explanation for the Rust Belt unease which formed much of Donald Trump’s appeal.

The book expands Bonvillian’s essay, published in the summer of 2016, on “Donald Trump’s Voters and the Decline of American Manufacturing,” in which he argued that “The United States ignores the manufacturing sector at the expense of its innovation system and working class communities. The political ramifications could be enormous.”

“Analyzing congressional elections between 2002 and 2010,” Bonvillian wrote, David Autor and co-authors “found that increased exposure of local labor markets to foreign competition, particularly from China, tended to push both political parties toward candidates at their ideological extremes, polarizing the political process. The Trump candidacy is an extension of this development.”

Bonvillian and Singer’s thesis seems on its face far more plausible than the one which Trump’s supporters find plausible—that the decline of the American manufacturing sector is due to unfair trading practices by China and other countries (more on this below). Trump’s thesis is plausible to his supporters because China has in fact engaged in intellectual property theft and does in fact view itself as the chief geopolitical adversary of the United States.

Thus both Trump’s thesis and Bonvillian and Singer’s counter-thesis seem plausible, given their premises. Both employ the rhetorical device of metonymy—making a part stand for the whole. But which thesis, if either, is true?

In their introductory chapter, Bonvillian and Singer bracket “a series of major macro issues—trade, tax, and currency—that are quite significant.” They then stipulate:

However, the focus of this work is not on these macro issues—which remain important—but on another foundational problem which has received almost no attention until recently: the failure to bring the still strong U.S. innovation system to bear on its manufacturing system. Innovation is the new story in American manufacturing (12).

In succeeding chapters, Bonvillian and Singer survey U.S. production history, review the sharp manufacturing decline in the first decade of the 21st century, examine the varied attitudes over time in mainstream economics toward manufacturing, consider a new policy focus on advanced manufacturing since the Great Recession of 2007-2009, the centerpiece of U.S. advanced manufacturing policy, the advanced manufacturing institutes, the problem of “start-up scale-up” (the difficulty of expanding the production with “hard” technologies as opposed to easily copied software), the manufacturing workforce, the thesis of “secular stagnation”(a condition of negligible economic growth), and finally, summarize the key findings.

In my view, one of the issues bracketed for exclusion by Bonvillian and Singer ties together all the elements—particularly the decline of U.S. manufacturing employment and chronic U.S. current account deficit—far more tightly than does Bonvillian and Singer’s thesis. The de-industrialization of America and its chronic trade deficits have essentially the same cause as in Great Britain’s earlier decline: its currency’s role as chief official reserve currency.

Those persuaded by Bonvillian and Singer’s thesis would do well to consider the failure of longstanding British policy efforts to promote advanced manufacturing. Indeed, from the British perspective, America’s position relative to the U.K. is enviable, and in the view of some British economists, due to the U.S. having followed, while the U.K. fecklessly avoided, the sort of advanced manufacturing policy agenda advocated by Bonvillian and Singer.

Frequently, the United States is portrayed as a liberal market economy which has eschewed interventionist policies. But this has not been the case with industrial policy, where there has been active state intervention to support key industries and promote innovation: pharmaceuticals and biotechnology are supported by the National Institutes of Health; the Defense Advanced Research Projects Agency has invested in information technology; and support for innovation in small and medium-sized enterprises is provided by the Small Business Innovation Research program. As Mazzucato observed… “how many people know that the algorithm that led to Google’s success was funded by a public sector National Science Foundation grant?” In the US, Governments have been picking winners or “choosing races” … whilst hiding behind the convenient veil of the free market.

As Bonvillian’s original article indicated, the Obama administration was the one most well-disposed to adopt the Bonvillian-Singer thesis on advanced manufacturing. Yet based on results the Obama policies must be judged a failure:

Neither Quantifiable nor Falsifiable

Perhaps the greatest weakness in Bonvillian and Singer’s thesis is that, as merely another competing narrative, it is neither quantifiable nor falsifiable, and thus ultimately inconclusive. Yet tracing American industrial decline to the dollar’s reserve-currency role is quantifiable. The basic elements are contained in the nearby chart. 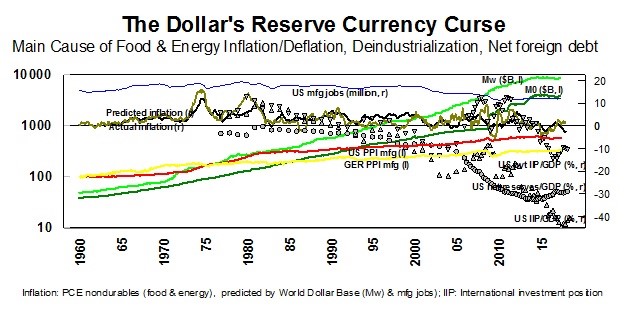 The chart shows, from several angles, the main cause and mechanisms driving U.S. chronic commodity inflation/deflation, de-industrialization, and net foreign debt. The chart shows the absolute values and rates of change of the World Dollar Base (that is: total domestic and foreign official dollar liabilities), the price indices of manufactured goods in the U.S. and Germany (the longest pair of such series of which I am aware), the number of U.S. manufacturing jobs, and the components of the U.S. net investment position, as well as a simple prediction of the price of U.S. nondurable (mostly food and energy) price inflation based on only two variables: the change in the World Dollar Base (lagged about 3 years) and manufacturing employment. When both the latter variables are included, world oil supply “shocks” (measured by production and the change in stocks of crude oil) are actually statistically insignificant, i.e., irrelevant.

Here are the key take-aways:

Rome, the British Empire, and the U.S.

The main reason for the U.S. dollar’s role as chief official reserve currency is essentially American policymakers’ monkey-see-monkey-do copying of the earlier British Empire’s practices, based on the misunderstanding that the pound sterling’s use as an international reserve currency was an essential source of economic strength rather than economic weakness for the British Empire.

But in one important respect, the economic decline of the British Empire, and now of the United States, differed substantially from ancient Rome’s. Ancient Rome’s money was not a reserve currency. The Emperor Constantine’s gold solidus (which gave soldiers their name) was simply a gold coin, worth about $180 today. The modern gold standard, which ended in 1913, began in the mid-15th century as a conscious effort to restore the solidus following the 90%+ debasement of currencies during the Hundred Years War. As in the Roman Empire, the chief cause of monetary debasement under the modern gold standard was governments’ financing of national budget deficits, which ultimately made the gold sol finally “not worth a sous.” But John Maynard Keynes’ scheme of the pound sterling’s use as an international reserve currency scheme, upon which the dollar’s international role was modeled, was strictly a modern invention, originating as a British expedient to forestall the repayment of colonial and First World War sterling debts in gold.

If America’s manufacturing decline is the inevitable by-product of the dollar’s chief reserve-currency role, then the solution is technically straightforward, though politically not easy. As Lewis E. Lehrman and I have argued (for more than three decades in my case, and more than four in his), the United States should make honesty the best policy, by undertaking the repayment of all outstanding foreign currency reserves, and their replacement with precious metals.

Such a reform would make it impossible to finance federal deficits through the monetary system, thus requiring a return to federal budget surpluses, which would be necessary to repay the outstanding U.S. public debt to foreign central banks. The international debt repayment in turn would reverse the process of American industrial decline depicted in the chart, by restoring the international price competitiveness of U.S. manufacturing. Protective tariffs are not merely ineffectual but economically and politically counterproductive. As the decision of Harley-Davidson to shift operations abroad indicates, far from representing the salvation of American industry, U.S. protective tariffs can only accelerate its decline. According to a Wall Street Journal map based on analysis by Moody’s Analytics, the tariffs “will have the greatest impact on the U.S. counties that voted Mr. Trump into office.”

Yet Mr. Trump appears to have decided against any change in the dollar’s reserve-currency role, presumably for the reason highlighted in the March 2016 presidential debate: even Donald Trump manufactures Trump-branded clothing abroad. According to the Washington Post,

Sen. Marco Rubio (R-Fla.) called on Trump during a March 3 debate to announce that “all the Donald Trump clothing will no longer be made in China or Mexico but will be made here in the United States.” Trump dismissed the notion, arguing that China’s currency policies “make it impossible for clothing makers in this country to do clothing in this country.”

There are several officials within the Trump Treasury Department who fully grasp and are competent to initiate an end to the so-called Triffin Dilemma—the fact, first established by Jacques Rueff, but later named around 1960 for the Belgian-American economist Robert Triffin (1911-1993)—that any increase in official dollar reserves must be matched by an equal deficit in U.S. net exports. (This “iron identity” is reflected in the comparable decline in U.S. net monetary reserves and the U.S. international investment position.)

An effective solution to the decline of American manufacturing highlighted in Advanced Manufacturing, it seems, requires either a change of mind by this president, or a different president.

Understanding De-Industrialization means looking at indirect causes like the place of the U.S. Dollar in the global economy.

It is a commonplace that American manufacturing is in decline. But is this true, and if it is, what are the appropriate remedies?

Peter Thiel and the Path to a New Conservatism

Those of us who argue that what we conserve is freedom together with equality need to make an ally of Thiel.

In the real world as we find it, America has no choice but to adopt an industrial policy, and we will be better for it.