Has anyone actually read the Common Core Standards? Not advocacy of the standards, or criticism of them, but the standards themselves? Have even those speaking out most loudly in their favor examined them closely? 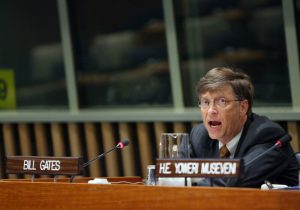 For the past two years or more, we have heard different personages—from state school board members to state school superintendents to state legislators to experts in various think tanks to former governors to soon-to-be former governors to the arch-funder of the Common Core, Bill Gates, hit all the talking points about these “standards” in English and math. We have been told that they will lead to “college and career readiness,” though no college says they will. We have heard that such standards are absolutely indispensable in a 21st-century global economy, though no one has ever told us why the study of English or mathematics should change just because we use computers or live in a different century.

Has the introduction of calculators into elementary classes over the last 40 years made students stronger or weaker in arithmetic? Are today’s elected representatives more or less literate than was Thomas Jefferson, who penned the Declaration of Independence with a quill and ink? Has America at any point in her long history been unaffected by international trade? (Hint: When in 1492 Columbus sailed the ocean blue, it was a quest for a quicker route to Asia in the 15thcentury global economy!)

We have heard the phrase “raising the bar” so many times that the bar itself must have joined the Mars Rover by now. Yet when have we ever heard an “expert” or pundit or elected official say, “By golly, if we don’t have Common Core ELA Standard RL-7.7 in our schools, then we are setting up the next generation for failure”? I have yet to hear any advocate of the standards say anything that is concrete. The proponents praise the Standards—plural—to the hilt. They spend no time advocating or explaining a specific standard.

There may be a reason for that. The standards are unreadable. They are written in an almost impenetrable education-ese, churned out by educrats for educrats. Many people have tried to make sense of the standards, but when they cannot, they most often give up. They wonder whether the standards are over their heads and involved in some deep mysteries that only educators can unravel. Thus, the strategy of the Common Core advocates (particularly in those states that are taking Governor Huckabee’s advice of “rebranding” them) has been to turn the standards’ greatest failing into their greatest defense: critics are asked to point to a specific standard they do not agree with and explain its shortcomings. It’s an effective strategy. How can honest people criticize what they cannot understand? Or, put another way, how can they criticize what was written so as not to be understood?

For the past couple of weeks I have been conducting my own exercise. I have taken a couple of the standards—written for the kindergarten level, mind you—and asked very bright people what they can make of them. I have not asked regular folks off the street but rather those intimately involved with education: teachers, the heads of successful schools, and people with degrees in languages. One of these standards I addressed in the article from last Friday; it suggests there are several ways to spell the vowels. Here is another—RF-K.3a, to be precise—on consonants:

Demonstrate basic knowledge of one-to-one letter-sound correspondences by producing the primary sound or many of the most frequent sounds for each consonant.

I love watching a person’s reaction when reading this standard. He begins thinking that it is easy: it’s for kindergarten, after all. He recognizes a few phrases and skims through it happily. Then he gets to the end and realizes something is not right. He may say under his breath, “Wait” or “What?” Then he begins to read it again but may only get through half of it. He begins yet again, reading it aloud, slowly: “by producing the primary sound or many of the most frequent sounds for each consonant?” Then the person laughs. He gets it. The standard is utterly absurd.

The standard is absurd because English consonants don’t have many sounds. The letter “b” has exactly one sound: /b/. The letter “d” has one sound: /d/. Most consonants, in fact, only have one. A few, like “c” and “g,” have two sounds, often referred to as hard and soft. A letter like “c” may have a third sound, such as in the word cello, used rarely and usually with words imported into the language. The /sh/ sound of “s” in sugar and sure is a perfectly regular albeit uncommon usage.

Which consonants have so many sounds that children can only learn some of them? They plainly do not exist. And in which cases would children learn only “the primary sound” rather than “many of the most frequent”? Should the students only learn the hard “c” on the one hand, but the first five pronunciations of “d” (which do not exist) on the other? The standard simply makes no sense. Whoever wrote it either does not really understand the English alphabet or—and this is entirely possible—is committing a massive educational fraud to the tune of 45 states across the land and untold billions of dollars.

So what is the defrauded public to do? The public must go through the “brain damage” of reading these standards and breaking the code in which they are written. To that end, I have written a book on the English Standards and will continue to expose this nonsense. I invite others to join in the fun. More important, rather than being told that We the People must express our objections to the Common Core by citing specific standards, we should turn the tables and require the lawmakers to defend this monstrosity, standard by standard.

Can you imagine your state representative, senator, or governor—who supports the Common Core, or who has failed to get rid of it entirely—being asked how many ways there are to spell the letter “a” or which consonants have many pronunciations? And that’s just the beginning of the Common Core absurdity. How about this “speaking and listening” standard for kindergarten:

Participate in collaborative conversations with diverse partners about kindergarten topics and texts with peers and adults in small and larger groups.

“Governor, are kindergarteners really capable of carrying on ‘collaborative conversations’ with other kindergarteners?” (Correct answer: No. Anyone who has ever been in a kindergarten class knows that if you turn the conversation over to them, what begins as a lesson on George Washington will end up with ninjas.)

“Governor, what is a diverse partner? Does that mean ethnically diverse? Or does it mean intellectually diverse, so that through group work everyone can make the same grade? Why is there so much emphasis on diversity in the standards?”

“Governor, what is a kindergarten topic? This standard is inexcusably vague. Won’t the biased textbook publishers end up determining those topics? Tell us in your own words what kindergarteners should learn.”

“Governor, tell me why we must have this standard in our state in order to ‘raise the bar.’ This just seems like a bunch of kids talking to each other about nothing in particular. Hasn’t that already been going on for the last 40 years, which is why the academic level of our schools is so low to begin with?”

What 98 percent of our elected officeholders prefer to do is hide behind talking points and strategies given to them by consultants on how not to take a stance on anything, indeed how not to know anything. It’s time we say the obvious thing—that every child who has had a few lessons in phonics should know: the Common Core emperors have no clothes. All we have to do is stand up in public, read a standard to them, and see if they are smart enough finally to get the joke.

Inside the Title IX Tribunal

The CIA Invades the Senate

Inside the Title IX Tribunal