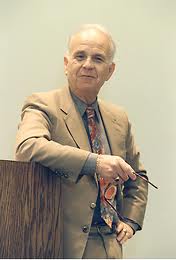 The distinguished literary scholar Stanley Fish can teach one a great deal about argumentation. Lacking a law degree, he has also served on law faculties and even as an assistant dean in the Duke Law School. What business does this academic superstar, portrayed as lusty professor Morris Zapp in a David Lodge novel and derided by Camille Paglia as a “totalitarian Tinker Bell,” have teaching law?

I have seen this man of the political left outrage and delight audiences at scholarly conferences and venues, including a Federalist Society convention.  A friend also reported to me that Fish once asked him the difference between a West and an East coast Straussian, and, upon hearing a brief explanation, Fish declared himself to be a West coast one.  (See comment 2 below.) That is, I infer, Fish agreed with these Declaration of Independence conservatives on the vital importance of the political context for establishing the meaning of a text.Fish takes particular delight in skewering naive absolutist defenses of free speech. At one American Political Science Association panel I heard him compare himself to conservative scholars Walter Berns and Francis Canavan as critics of First Amendment absolutism. The claim elicited considerable grumbling from their friends in the audience. But as Canavan might have said, following the title of one of his books, “For what purpose?” His and Berns’s political aims in, e.g., curbing pornography, were not at all his, which would allow all sorts of restrictions on speech. Fish’s point well taken is that we should be talking about qualities of judgment concerning speech (as distinguished from “expression”) rather than rights to free speech. Yes, that is often neglected and where more of the debate should be–see First Amendment opinions of Justice Alito.

In his New York Times blog Fish continues his skepticism about free speech claims. He criticizes the Supreme Court opinion in the Stolen Valor medal case, asking “Is a society that does not regulate hateful and false speech demonstrating its strength or courting its own demise?”

Moreover, he seems to take particular delight in provoking the typical Times  reader by defending (some would say deconstructing) popular culture and public figures, such as his friend Dinesh D’Souza, Rick Santorum, and Sarah Palin. In reviewing her autobiography, he gushes that her

message is clear. America can’t be stopped. I can’t be stopped. I’ve stumbled and fallen, but I always get up and run again. Her political opponents, especially those who dismissed Ronald Reagan before he was elected, should take note. Wherever you are, you better watch out. Sarah Palin is coming to town.

Fish allows, “Do I believe any of this? It doesn’t matter. What matters is that she does, and that her readers feel they are hearing an authentic voice.” We see what he is doing—he is a master sophist, and by this I mean no contempt. He is in the tradition of the first teachers of law, the ones Socrates tried to knock off in order to establish the reputation of philosophy.

This sophistry falls apart against the seriousness of guns in his most recent blog post “Is the N.R.A. Un-American?” While claiming to respect the views of both gun owners and gun regulators, Fish distorts the anti-tyranny Second Amendment argument. “I mean those who read the Second Amendment as proclaiming the right of citizens to resist the tyranny of their own government, that is, of the government that issued and ratified the Constitution in the first place.” His argument wrongly assumes their belief in the imminence of the tyranny.

Fish seems to imitate Lincoln’s argument in his First Inaugural Address, but of course Lincoln appealed to the rule of law, government by consent, the very logic of constitutional government, and “the better angels of our nature.” In making his own defense of constitutional government from “un-American,” anti-tyrannical arms bearers Fish falls victim to his own relativism—as for Hobbes tyranny is merely “monarchy misliked.”

The strong defense of the Second Amendment as fulfilling the Declaration of Independence’s duty to oppose tyranny is given by Edward Erler: ”The Second Amendment is unique among the amendments in the Bill of Rights, in that it contains a preface explaining the reason for the right protected: Militias are necessary for the security of a free state.“ It follows that “The whole people are the militia, and disarming the people dissolves their moral and political existence.”

The Progressives, followed by scholars such as Cass Sunstein, made arms-bearing a collective right rather than an individual one. The Second Amendment is our best constitutional reminder, as Erler aptly puts it, that “Rights and liberties are best secured when there is a ‘frequent recurrence to first principles.’”

When I asked a distinguished law professor about Fish’s law school appointments, he replied that anything can be taught in a law school. And I gather it is. So to the question, should the clever and entertaining Stanley Fish be teaching on a law faculty, the sufficient answer is, so is Martha Nussbaum.