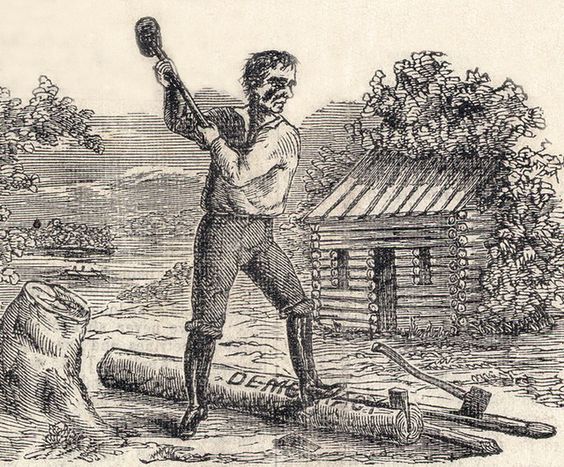 Abraham Lincoln as “Railsplitter.” Cartoon image from masthead of The Railsplitter (1860) Library of Congress

Volume 2 of historian John Ashworth’s discussion in Slavery, Capitalism, and Politics in the Antebellum Republic touches on a shift in Americans’ views toward wage labor. This shift anticipated the rise of the Republican Party’s “free labor” ideology, and then continued to develop concurrent with it. Prior to this shift, Americans widely viewed wage labor as invested with little dignity, as scarcely preferable than indentured service. If one worked for wages, respectability required that one aim to work out of this form of employment, saving toward property ownership or work as an independent artisan. Only those who couldn’t or wouldn’t move out of wage labor remained in that condition permanently. Lifelong wage labor was for losers.

Part of this attitude was ideological. “Freedom” not only meant freedom from improper political restraint, it meant freedom from dependence on other people for one’s provision. The Jeffersonian yeoman, in particular, as well as the independent artisan (also less so), exemplified this aspiration.

I suspect the nature of the labor market at this time supported this view as well. In early America, population was highly diffuse, towns were small and travel difficult. Labor markets were so thin, and transition costs so high, that employment was sticky, wage workers often had few practical alternatives to their current employers. At this time, employer-employee relationships were often paternalistic, extending beyond one’s work into all parts of an employee’s life.

With increasing population density and industrialization, local labor markets naturally thickened. That meant more options for wage employees. It became more of a sellers’ market for labor rather than a buyers’ market. This undercut a requisite of the older, more hierarchical relationship of wage employees to the employer. Increased market power allowed the wage employee increasingly to transact on an equal basis with the employer. If the employee did not like the wages or working conditions offered by the employer, then the worker was free to find alternative employment more to his liking.

The workers’ relationship to the market changed as well, at least relative to yeomanry. For the yeoman the market existed on the periphery of daily life. The “market” was a special day of the week, not a daily occurrence. One produced mainly for one’s own consumption, with only the surplus used for exchange in the market, and then for a few things one could not easily make. Freedom was understood as freedom from human influence, even as one’s life was subjected to the potentially harsh vagaries of nature.

In contrast, the market interpenetrated the daily existence of wage labor; the market was a central feature of the life of wage workers, dictating a different rhythm and, as it were, creating a different semiotic environment. “Contract” became the epitome of human liberty rather than the yeoman’s independence from human direction. By definition, a contract takes at least two parties, so it is of necessity a social phenomenon. Subsistence farming, at least in its ideal form, exists with minimal economic dependence on those outside the family.

This picture of free (and freed) men contracting with each other, upright and face to face, provided the emotive core of the Republican’s “free labor” ideology. Free labor ideology had a broader view of human dignity beyond the end of chattel slavery (which was, of course, a critical first step).

This view of freedom and human dignity not only had political implications, but legal and social implications as well. Indeed, the legal doctrine of substantive due process—the notion that the Fourteenth Amendment’s liberty guarantee included a commitment to contractual freedom for labor, and therefore was suspicious of government restraints on the contractual rights of workers—rose decades later, from the roots of Republican free labor ideology.

This view of human dignity and contractual liberty also led to the early use of antitrust laws against union collective bargaining agreements. These agreements were seen as restraints on trade, limiting the freedom for workers to contract independently with their employers, and thereby offending their dignity as mature men. Unions of course contested the claim and argued that this conception of contractual liberty continued to protect the dignity of workers in light of once-again changed economic circumstances and the need for collective action. This argument, with differing conceptions of the nature of power, liberty, work and wages, and the relationships between them, continued to rage pretty much for the next century.

The Age of Rage

An Insular, Discrete, and Disdained Majority