In her first formal appearance as head of the United States Federal Reserve, Janet Yellen obliquely suggested the Fed might not raise its mighty “federal funds” rate to tighten the economy until months after its Quantitative Easing bond purchasing ended completely, coyly portending cheap money indefinitely. The market shuddered but soon calmed at the soothing voice of its controller.

Not so Brian S. Wesbury or Bob Stein of FirstTrust Advisors, who have routinely seen through the Fed’s Delphic pronouncements. Writing at ftporfolios.com, they responded to Yellen with uncommon common sense:

In the past, the Fed manipulated the funds rate by making reserves “scarce” or “plentiful.” It withdrew reserves to push rates up and added reserves to push rates down – a simple “supply and demand” calculation. So, when rates went up, the Fed was tightening and when rates went down, the Fed was easing. This was a classic monetarist view of the world. However, now that the Fed has injected $2.6 trillion in “excess reserves” via QE, there is no way to make reserves “scarce” without completely unwinding the Fed’s balance sheet. As long as banks have excess reserves, they do not need to borrow reserves from other banks to meet their reserve requirements.

The federal funds rate, they conclude, “has become an anachronism. Six months? Twelve months? Twelve years? Who cares? Excess reserves are all that matters.”

So the great Federal Reserve that was created to take the market risk out of investing (for banks, anyway) had no clothes. It floated $2.6 trillion in bank loans it now fears to re-absorb, with investors, banks and foreign governments simply hoping all turns out well. The herd is following the ups and downs as the Fed oracles speak their magic words. Once again the sciences of public administration and economics appear more like the Wizard of Oz than Otto von Bismarck. Wasn’t the Fed, even before the Great Depression, reigning through a dozen following recessions and right up to the current Great Recession as a deus ex machina to prevent such instability?

And where, we might ask, did delusions of controlling the economy originally come from? A good place to begin would be with the two intellects featured in Yuval Levin’s widely praised new book, The Great Debate: Edmund Burke, Thomas Paine and the Birth of Left and Right. 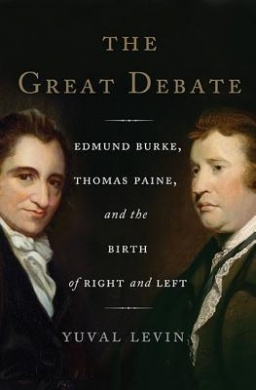 Burke and Paine are recognized as the fountainheads of modern conservatism and progressivism (with Paine perhaps somewhat behind his continental counterpart, Rousseau, in influence). Levin does an excellent job of showing the differences between the two regarding nature and history, today and the past, justice and order, choice and obligation, reason and prescription, and revolution and reform, with Paine supporting the first of each of these contrasting ideals and Burke the second. It is a good read and a useful review of both thinkers.

To Levin, the differences between them “are tied together especially by a disagreement about the authority of the given past in political life.” This, he writes, is more than “a staid and simple dispute between tradition and progress.” Indeed it is not simple, for the lines Levin traces seem to blur in modern times. In his conclusion he notes that Ronald Reagan quoted Paine in his 1980 Republican nomination speech as an inspiration for change and that Barack Obama reportedly once described himself as a “Burkean eager to avoid sudden change.” Levin, however, explains these anomalies as merely a “second-order argument” about welfare state institutions based on previous changes that are traceable back to his two philosophical poles, Paine and Burke. Still, he concedes that today’s right is more individualist than Burke—even “strident” and open to “hyperindividualism”—and that today’s left has abandoned much of Paine’s liberalism and adopted a “more technocratic way than Paine did.”

How does all this tie in with today’s exaggerated hopes for the Federal Reserve? It is not so much that today’s left is more technocratic than Paine—though Levin is correct about that—but that Paine was more technocratic than both Burke and modern conservatism. While there are hints in Levin’s book, but not in his conclusion, the essential difference boils down to their respective views of reason and science. Of epistemology if you will. Paine was an admirer of Isaac Newton, devoted himself to scientific pursuits and inventions, and believed that science “seemed to open endless possibilities for the conquest of nature and the empowerment of man.” Burke was skeptical, believing in an “experimental science” that can only be learned by concrete experiences over a long period of time, generations in fact, by developing a tradition.

As the Nobel Laureate F.A. Hayek emphasized so well, the essential difference in worldviews today is not so much about the past itself as in their conceptions of reality generally. One side denies, while the other emphasizes, the enormously greater complexity of social than physical life. As Levin put it, Paine’s The Age of Reason argued

that the combination of new insights into the science of politics and greater freedom for citizens to exercise their own individual reason upon public questions would free liberal societies of countless ancient prejudices and open the way to a new politics of liberty. Burke thought the governing of human communities was much too complex a task to be simplified into a series of pseudoscientific questions and resolved by logical exercises. It required, in his view, a degree of knowledge and wisdom about human affairs that could only be gathered from the experience of society itself.

Emphasizing complexity, Burke anticipates Hayek and follows his friend Adam Smith. But Levin is too focused upon hyperindividualism, stridency and radical solutions among modern conservatives to develop further the distinction he so well expresses here. Using complexity as the essential distinction indeed clears up the confusion of his off-putting conclusion. It also explains why those on the technology-worshiping left keep thinking the Fed will control the market the next time around while the market—one of the great institutions of human complexity—can always find another way.

In his 1964 monograph entitled “Kinds of Rationalism,” Hayek distinguished between a rationalism that is abstract and purely deductive, as with Paine’s natural law, and one based on reason and experience as with Burke. The latter, with which Hayek identified, is a balance between reason and tradition—a synthesis, a tension, a balance. It is a balance that Levin understands but does not sufficiently emphasize, especially when summarizing the thought of the two men. He does state it well in his introduction, where he answers the charge that Burke was inconsistent in supporting liberty for the American colonies while supporting tradition in the case of the French Revolution:

Such a charge miscasts both Burke’s earlier as well as later views, neglecting the arguments he offered both as a reformer and as a conserver of Britain’s political tradition. Those arguments were always about finding a balance between stability and change—the quest that . . . was at the core of Burke’s ambitions. In the concluding words of his Reflections on the Revolution in France, clearly foreseeing the coming charge of inconsistency, Burke described himself as: “one who wishes to preserve consistency, but who would preserve consistency by varying his means to secure the unity of his end, and, when the equipoise of the vessel in which he sails may be endangered by overloading it upon one side, is desirous of carrying the small weight of his reasons to that which may preserve its equipoise.”

The presence or absence of balance, equipoise, tension, and fusion between free reason and evolved tradition is the true birthplace of the left/right distinction. It long precedes Burke and Paine, in fact, and is identified with them in Yuval Levin’s useful book even if that is not what Levin finally concludes is the essential difference between them.

Responding to Greg Weiner on the Duty to Obey the Law

The First Virtue of Old Whigs: Prudence in Burke and Lincoln

Weiner’s Old Whigs offers a persuasive account of how Burke and Lincoln negotiate the tensions between principle and prudence.

The Fertility God of Conservatism