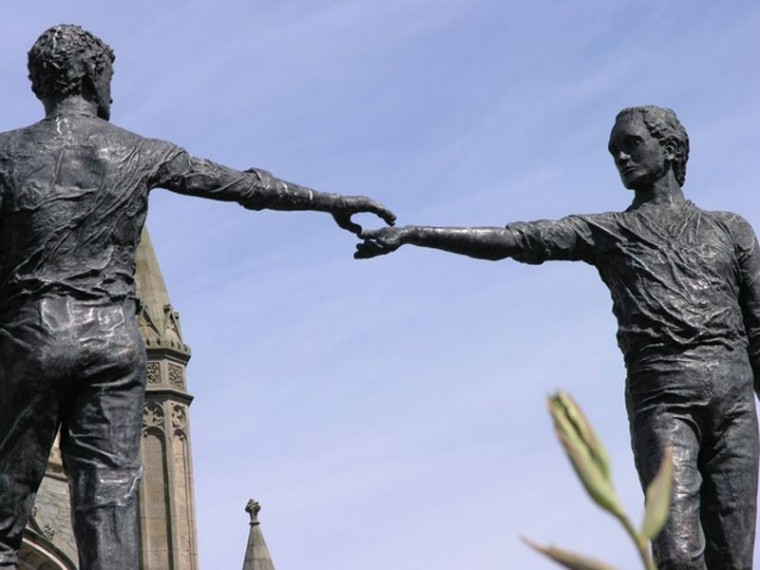 My earlier post suggested that there might be something to learn from the liberal version of the German Rechtsstaat—the tradition that American Progressives ignored when they imported the most authoritarian versions of administrative law then circulating in Germany.

Philip Hamburger rightly calls attention to the Progressives’ selective acquisition, and he fully acknowledges that the liberal tradition, which over the long haul triumphed in Germany, has a great deal going for it. But he is diffident about the liberal Rechtsstaat because it remains rooted, he says, in a legal tradition that is inimical to the common law tradition that (according to Professor Hamburger) the Constitution seeks to enshrine.

The Rechtsstaat rests on a sovereign lawgiver who creates order—Ordnung. In its liberal incarnation, the Rechtsstaat tries to mimic lawful government by borrowing its language of rights and due process, as well as many of the institutions that go along with it (especially independent courts). It may be quite good at mimicry—a lot better, certainly, than the “legal process” bequeathed to us by the Progressives’ New Deal heirs. But it’s still the rule of the Staat, not of law. The rule of law, rightly understood, presupposes a common law order and the separation of powers. That, roughly, is Professor Hamburger’s argument.

Like any serious argument, this one invites numerous questions. I’ll state one of my own as a tentative proposition (I’m not entirely sure it’s right): Whatever may be true of the common law order and the separation of powers way back when, the Rechtsstaat may be a more effective way of protecting liberty in the age of statutes and active government. You need some tolerably reliable way to distinguish public authority from private interest. Without that, all law becomes an interest-group racket. The Rechtsstaat can provide protection against that prospect, precisely because it is Staat as well as Recht. A state-less rule-of-law order is, by comparison, more vulnerable before that prospect.

That’s a lot of heavy breathing. An example may help.

In the late 1960s, courts and then Congress institutionalized so-called “citizen suits” against government agencies. Unlike regulated parties, citizen plaintiffs don’t have at stake anything you’d recognize as a right; they represent broad, widely shared values. (Environmental groups are the prototype.) The idea was that agencies were routinely “captured” by regulated industries, so there had to be a counterweight—parties with legal entitlements to make executive branch agencies obey the purposes of Congress, as embodied in statutory law. To that end, statutory citizen-suit provisions typically authorize “any citizen” to sue the administrator for failure to perform a non-discretionary duty. So when the statute says that the Environmental Protection Agency “shall” regulate and the agency falls short, environmental groups have a cause of action. They’re equal participants in the agency rulemaking process and in court.

At that time, what was then West Germany was also discovering the issue of protecting the environment. People were apoplectic about pollution. Nuclear reactor sites had to be protected with paramilitary force. A Green Party was beginning to form. And, some lefty law profs trooped to Harvard, learned about citizen suits, and tried to import them into their own country. They penned learned articles about the “enforcement deficit” in environmental law, wrote model statutes, and proclaimed that even Amerika has citizen suits, the better to promote law and democratic participation. Why can’t we have that?

Because you can’t, the West German legal establishment responded. The key argument against citizen suits was not that they would disrupt orderly administration, or invite abuse, or overload the courts. It was: what you people are advocating is Nazi jurisprudence. We’ve thought and worked for decades to get rid of that garbage, and you’re not going to undo our accomplishments just because people get upset about—well, garbage. The citizen-suit trial balloon soon shared the Hindenburg’s fate. There’s no trace of the debate in administrative law to this day.

To be absolutely clear, I am not calling U.S. public interest groups and citizen-suit advocates Nazis. My point is that a legal instrument that well nigh everyone stateside accepted, often with great enthusiasm, went down in flames over there, as an intolerable assault on a liberal legal order. To rehearse the German professoriate’s key argument against citizen suits:

The point of law and especially administrative law (they said) is to protect rights against coercive state interference. To that end, we have independent courts that will perform de novo review on law and facts. If we want to keep that up, we must limit the courts to rights protection. They can’t review the legality of governmental conduct outside that context. A plaintiff who sues for that purpose is asking the court to command the performance of his private idea of how public authority ought to be exercised, and that’s not a right he has or courts can enforce. Likewise, it’s not the business of courts to make government and law more “democratic.” There are institutions, such as political parties and parliaments, to safeguard democracy and participation. Courts, in contrast, guard rights—if need be, guard them against democratic demands.

If you want to mobilize courts as engines of law-enforcement and democracy (the argument continues), they can’t be independent. If you want them to do the will of the people, go make them instruments of that will—and stop the pretenses about individuals’ rights.

Germany took that path once: in 1934, the Reichstag authorized a version of the allgemeine Buergerklage—the general citizen suit. It did so for obvious reasons. The inherited Weimar bureaucracy might not always enforce the new authorities’ race laws with the requisite speed or resolve. What was needed were actions by private informers or Citizens United for the Separation of Jews and State to enhance public participation and ensure obedience to law. That meant, however—and alongside the enormities recorded by history—the end of an independent judiciary. You cannot surrender the exercise of law to “democracy,” nor can you surrender the Staat to a “movement.” Not if you want to have a liberal Rechtsstaat and a judiciary that is institutionally disposed to protect rights.

The most impassioned plea against citizen suits along these lines came from Felix Weyreuther (1928-1997), a highly respected authority and president of West Germany’s Bundesverwaltungsgericht (its highest court for administrative matters). I’ve flipped through his 1975 book again, just to make sure my recollection is right: it’s a forceful, erudite, compelling exposition of the logic of a liberal legal order. Yet Weyreuther may have written it over an extended weekend. He didn’t have to invent the arguments. They were all there, fully worked out in the cases and legal literature. And he didn’t need any special encouragement. The demand for citizen suits was an assault on the independent judiciary over which he presided.

The logic just rehearsed isn’t entirely unfamiliar to our legal traditions. Quite the contrary. Marbury v. Madison (1803), the most famous case ever, starts on the same note: If William Marbury has a right, he’ll get full review and mandamus will issue (or would, under a constitutional grant of jurisdiction). If not, the question is “political” and the courts can’t interfere—not on Mr. Marbury’s behalf, and most assuredly not on behalf of Concerned Federalists for Lawful Government, or whatever.

It’s not hard to work through the basic common-law suppositions and separation of powers principles, and for a long time, those suppositions and principles held. But they’re long gone. The Administrative Procedure Act of 1946—the landmark legal product of the New Deal that substituted administrative process and deferential judicial review for traditional rule-of-law protections—makes judicial review available to anyone “adversely affected or aggrieved by agency action within the meaning of the relevant statute.” From this formulation, which conspicuously disavows any distinction between (regulated) private parties with rights and anybody else who might have a gripe, it’s but a hop and a skip to the conclusion that Congress can entitle anyone to sue. If you feel “aggrieved,” come on in.

Citizen suits are Philip Hamburger’s worst nightmare. They seek to compel what he views as a resurrection of royal prerogative—the non-legislative imposition of binding rules. The suits are a fond achievement of folks who say we should cheer the administrative process because it’s so much more democratic than Congress. Everyone can enter the process and be heard, and the government agency must give public reasons. In their world, there is no distinction between people with rights and mere bystanders or ideologues, and there is no governmental coercive authority worth worrying about. There are only equal discussants in a process that administers a vast common pool.

Why did these confusions triumph so easily? When citizen suits first appeared on the scene, then-Professor Antonin Scalia published a terrific polemic against the invention. He argued that only parties with “standing” in the form of a real-world “injury in fact” should be entitled to sue. The argument had traction, not least because Judge and then Justice Scalia pushed it relentlessly. It is fair to say, however, that he has lost that fight—not only because the “injury in fact” test is observed only intermittently, but far more importantly because an injury in fact test cannot possibly do what it is supposed to do or even admit its own purpose, which is to block the private abuse of public authority. The categories just aren’t there; it’s all separation-of-powers talk.

The distinction between public authority and private interest was the central point of Justice Weyreuther’s defense of the doctrine of Klagebefugnis, which is the German analog to standing to sue. It’s a very robust doctrine and a debate stopper—provided you think there is a Rechtsstaat and a public order that merits a defense against private interest. My point is that this argument is not readily available in a legal order built on common-law presumptions and separation-of-powers arrangements. These not only acknowledge, but in many ways seek to mobilize, private interest for a public order that isn’t Ordnung.

And so you end up with an administrative law regime that has no bounds, only “process”—one that cannot tell rights-holders from interlopers, having replaced both with vaguely defined “stakeholders” and “public citizens.” You end up with a judiciary that, in its “partnership” with the administrative state, has lost all sense of the relevant distinctions.

We can learn from the liberal Rechtsstaat; but we can’t import it. Just try to make the argument sketched here. The response you’ll get is, “These nice young people from Clean Water Action—you want to keep them out of court? And the polluters can sue?”

We’ll have to find some other way to explain this.

Instructive Hijinks of the High-IQ Set

The Progressive Decline of the Senate

Why Congress Cedes Power to the Administrative State

Our bureaucracy seems to move further and further from legislative accountability, but what explains this?

Cooperative Federalism is the Handmaiden to the Administrative State