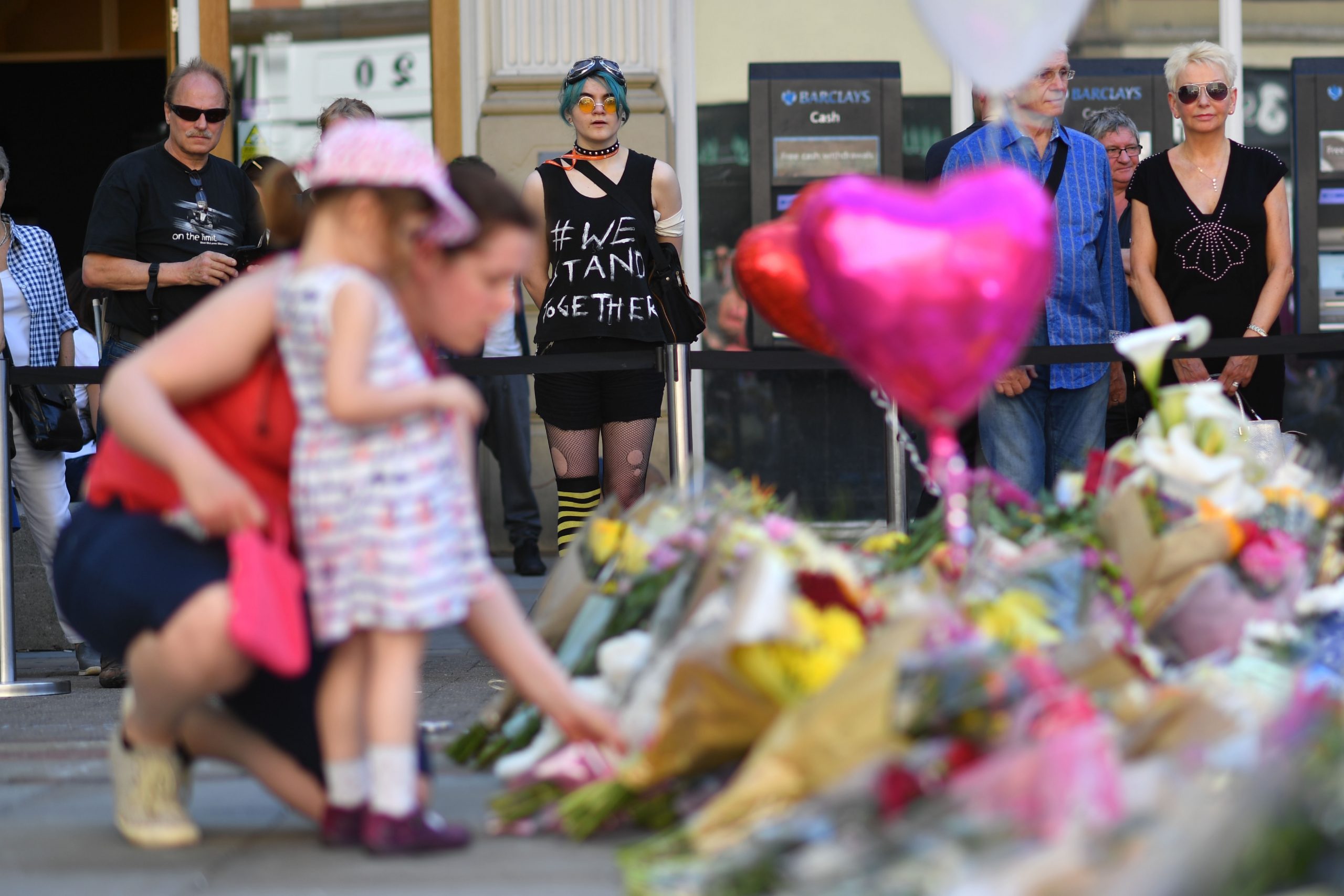 People lay flowers and messages in St Ann’s Square in Manchester, England, placed in tribute to the victims of the May 22 terror attack at the Manchester Arena. (BEN STANSALL/AFP/Getty Images)

When a young man such as Salman Abedi, the Manchester bomber, blows himself up, killing as many others as he can take with him, it is only natural for us to ask why he acted as he did. His behavior is so extraordinary, as well as evil, and so far beyond the range of normal, that we are inclined to seek for an answer in his personal psychopathology. Only the mad would do such a thing; and since he did it, we conclude that he must have been mad.

This is circular reasoning, of course, as comforting as it is useless. No one wants to think that a perfectly sane man, in possession of all his faculties, could do such a terrible thing, for then it casts a lurid light upon human nature, including our own. It is more flattering to human amour propre to believe that Salman Abedi was in the grip of some physiological disturbance that impelled him to act as he did.

But other types of explanation have their own problems, especially when it is hoped that they will assist prevention of future such events. Again, there is a natural tendency to sift the biographies of the murderous, mainly young men and women who act in this way in an attempt to find the one true key to their conduct. Then all that we will have to do to prevent repetition of such attacks is to place those who have the key characteristic, whatever it turns out to be, under close surveillance until the fashion (if one may be allowed in this context to use a word with such frivolous connotations) for suicide bombing passes—as one day it will.

Here, however, arises the problem of both the false positive and the false negative. It is extremely unlikely that any characteristic or group of characteristics will prove to be what in medicine is called pathognomonic, that is to say indicative by itself, or by themselves, of the condition, in this case of being a suicide bomber. The suicide bomber does not bear the mark of Cain.

Certainly, there are characteristics that appear in quite a proportion of the suicide bombers. Most of us have a stereotype in our minds, which (like many stereotypes) is not necessarily without any foundation in statistical reality. Thus we think of such bombers as second-generation immigrants who are in search of a cultural identity, who may have led a life of modern dissipation until, in a fit of self-disgust, they give up that life in favor of a kind of violent, arrogant and self-important puritanism. Such types there have been among them; but there are two problems with imagining that, by having identified characteristics such as these, we have advanced far in our understanding and therefore in our capacity to prevent further outrages. It is not that what we think is untrue; it is rather that we still believe, with Francis Bacon, that Scientia podestas est, that knowledge is power, as well in the human realm as in the natural or inanimate realm.

Any characteristic that is found among suicide bombers is likely to be found among many people who are not suicide bombers. The number of dissipated young men who turn arrogantly pious, for example, is likely to be a hundred times greater than that of suicide bombers. And this problem is likely to subsist, however refined the analysis becomes: the numerator will always be much smaller than the denominator. Moreover, surveillance itself will always remain fallible, however brilliant its successes. A friend of mine who works for the secret services assured me that there have been many more terrorist plots dismantled than the public knows about; but for most of us it is the plot that succeeds rather than the 10 or 20 that do not that counts. Only preventive detention for those with the identified characteristics of suicide bombers would eliminate the risk of any of them carrying out an outrage; but that would be to abrogate the rule of law.

But there is a second problem: suicide bombers do not share identifiable characteristics with anything like the regularity which might be useful under a regime of preventive detention. Their social or psychological profile can only be statistical; and since human beings are so radically unpredictable, no reliance on statistics will ever protect us entirely.

There is no final cause of any human phenomenon, of course: as the Haitian peasants say, behind mountains, more mountains. But there can be little doubt that a religious ideology, vile and impoverished as it might be, is an important cause of suicide bombing. Whatever the travails of Muslem immigrants to Europe, they are not objectively different in kind from those of other immigrants from far-off lands or cultures. As Aleksandr Solzhenitsyn would have said, it is ideology that makes all the difference.

When I learned of the provenance of the Manchester bomber, namely that he was the son of Libyan refugees, I asked myself a question that is now almost disallowable, even in the privacy of one’s own mind: whether any authority, in granting them asylum in Britain, asked whether it was in the national interest to do so. In all probability, the answer is no. The officials concerned probably thought only that they were applying a universal rule, or pseudo-universal rule, that in the name of humanity all political refugees (as Salman Abedi’s parents were) have an automatic right of asylum. And if they, the officials, were to be criticised, they would no doubt reply that there were a thousand, or five thousand, refugees for every suicide bomber, and that therefore the admission of Salman Abedi’s parents was a risk that had, on humanitarian grounds, to be taken.

I doubt whether many citizens, in their hearts, would agree with this, even those who are favorably disposed to the principle of asylum. Since it is not true that the enemy of my enemy is my friend (the Abedis were enemies of Muammar Gaddafi, at that stage an enemy of the West), or that the granting of asylum necessarily makes one grateful to one’s hosts (reflections on the career of the Ayatolla Khomeini might have taught us that), discrimination among and between asylum-seekers is in accordance with that now unspeakable thing, the national interest.

Is French Cohabitation Coming to America?

Could Sudan Become the Next Terror Haven?