Celebrities do not interest me, in part because I often do not know who they are. Not having had a television for forty years, and having survived quite happily without one, people apparently world famous are to me completely unknown, either by sight or sound; while those figures whom I consider important are often comparatively obscure and unknown to millions. I count myself lucky: there is evidence that those who interest themselves in the lives and doings of celebrities are unhappier than those who do not, though in which direction the causative relationship, if any, lies I cannot be certain.

However in the modern world, unless you are a complete hermit, celebrities, or rather news about celebrities, will come to you regardless of your wishes or interest. And even I, who have neither radio nor television, could not altogether avoid some knowledge of the current trial in England of two Italian sisters, former servants of Charles Saatchi and Nigella Lawson, who are accused of having defrauded the couple of $1 million by the unauthorized use of the couple’s credit cards. 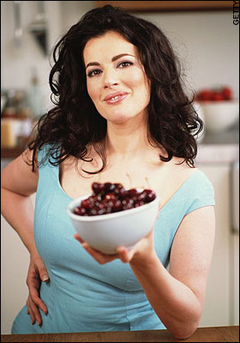 Mr Saatchi was an advertising magnate, now art collector and dealer, and his wife is a famous television cook and author of best-selling cookery books. Evidently they lived in a world in which $1 million can go missing without anyone really noticing.

The defense case of the two accused is that Nigella Lawson knew and approved of their use of the credit cards, on condition that they did not tell her husband of her use of cocaine, which they claim was heavy and persistent. She spent several hours in the witness box being examined by the lawyer for prosecution and cross-examined by the lawyers for the defense.

I am glad that she stuck to her guns, for to have admitted that she had ‘a drug problem’ would have been to imply that the problem was with the drug rather than with the person taking it (or them). And this would have been to get everything exactly the wrong way round. It is not the drug that takes the person but the person that takes the drug. Therefore Nigella Lawson was being absolutely honest when she said she had a life and not a drug problem.

People take mind-altering drugs for a variety of reasons, not the least of them because they desire a change of mood or mental state as a good in itself, irrespective of whether it is for the better or worse. What they fear is stagnation rather than discomfort. But there are many other reasons of course: the desire for euphoria, for calm, for oblivion, for excitement, for energy, for sleep, for sexual stimulation, for perceptive distortion, for the peace of forgetfulness, or some or all of these in quick succession. And for many people the illusions wrought by drugs are preferable to any reality, or at least any likely reality they think that they are likely ever to inhabit. Nor should we be too censorious about this, however foolish we may ultimately think the choice. For even if we ourselves inhabit:

The cloud-capp’d towers, the gorgeous palaces,

We are still such stuff:

As dreams are made on; and our little life

Is rounded with a sleep.

And few of us can so much as walk down the street without illusions about ourselves.

Nigella Lawson’s answer in the witness box was admirable because, by it, she refused herself the status of victim of disease which so many experts on addiction would falsely have offered her, exonerating her from her own behavior. In effect, she admitted that she took drugs because the spirit was troubled and the flesh was weak. Of course, if a person gives in often and long enough to this temptation to take the short way with his or her troubles, addiction can follow and add considerably to those troubles. But we should not forget that people who become heroin addicts take heroin, on average, for eighteen months before they become addicted. Addiction is no more something that happens to a person than is having the body of Mr Universe. And the overwhelming evidence is that people can stop if they so wish, that is to say if they have a motive strong enough to do so. The problem is that, human life being a biography rather than a mere series of moments each unconnected with what went before, if people pursue their addictions for long enough no such strong motive can be given them. Often I saw as a doctor a patient in his sixties who had permanently alienated his family and friends, and had ruined his health and career, by his excessive resort to alcohol. What could I say to such a man that would make the effort to change his life and abstain from drinking worthwhile? What better life could I in honesty claim he would have? The sixties are not an age at which a man can refound his life; he might as well continue.

This view of addiction, as a ‘problem of life,’ is a far cry from, and much more realistic than, the ‘chronic, relapsing brain disease’ that the National Institute of Drug Addiction insists, in my view dishonestly and in the teeth of abundant evidence to the contrary, that it is. This notion, however, has all but triumphed in the marketplace of ideas. Here is another definition of addiction that I found very quickly on the internet: Addiction is an uncontrollable compulsion to repeat a behavior regardless of its negative consequences. This definition has the logical consequence that no person who ever stopped taking a drug was ever addicted to that drug, unless he stopped taking it by enforced geographical separation from it. But there is no drug that is capable of producing such a state: choice is always preserved.

‘An admirable evasion of whoremaster man,’ as Edmund says in King Lear, ‘to lay his goatish disposition to the charge of a star!’ – or his neurones. Nigella Lawson did no such thing, for a problem with life is at least as much a problem with oneself as with life.

The Old and New Originalism

The Good Intentions That Abetted the Opioid Crisis

Many addictions can be traced to policies and practices established by trusted professional organizations.

It has now become an almost unassailable orthodoxy, at least in medical journals, that obesity is an illness in and of itself.

If addiction is a disease, and nothing else, then the addict is a slave of his biochemistry.