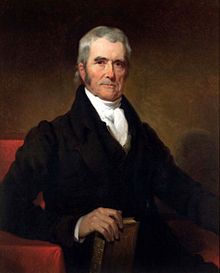 It is frequently alleged or assumed that a tension exists between natural-law theory and constitutional originalism. The tension is undeniable if originalism is a naked form of democratic positivism—that, e.g., law is simply the expressed will of the sovereign, and the sovereign people have expressed their supreme will through the written Constitution.  In such a case, the tension may even represent a contradiction.   Originalism, thus understood, would indicate simple obedience to the Constitution’s text, as understood by its authors, while natural “law” would encourage judicial entrepreneurship: to go beyond, outside, or even against that text, in the name of some law that is allegedly prior or higher.

The American Founders, however, seemed largely unaware of this opposition.  American jurists in the Founding era frequently invoked both natural-law concepts and an “originalist” interpretive method.  The latter method was so widely accepted that there was no need to designate it as a peculiar “ism.”    Originalism’s coexistence with natural law seemed uncontroversial and even peaceful.

Perhaps this non-opposition, this coexistence, was not mere historic accident.  Perhaps there is something complementary.    Indeed, in some respects, natural-law theory might be both proper and necessary to constitutional originalism.

In one important, but limited respect, commentators generally acknowledge that natural-law considerations belong to, and are thus proper to, the originalist inquiry.  The originalist seeks to know what the authors of a constitutional provision understood, meant, or intended by that provision; and some provisions of the Constitution were understood to (partly) instantiate and secure certain principles of natural right.  Therefore, to understand these provisions, the originalist must understand these principles, even if he deems those principles erroneous or even ridiculous.  So, for instance, whether he was a Lockean or not, Justice Benjamin Curtis was probably correct in Dred Scott to interpret the word “property” in the Due Process Clause to not encompass any “property” prohibited by the Founders’ natural-right principles; that is, the alleged property in human beings.

But besides this occasional role, natural law may be necessary, in a broader sense, to the entire originalist enterprise.  For a century now, judicial fidelity to the Framers’ intent/meaning/understanding has been subject to withering, sustained criticism by progressive jurisprudence.  Perhaps not coincidentally, the rejection of originalism happened roughly contemporaneously with the American academy’s nearly unanimous repudiation of natural law.  In the face of the progressive critique, a plausible natural-law theory may be necessary (in the Hamiltonian sense of expedient, not absolutely necessary) to bolster the theoretical justification of originalism.

To apprehend this necessity, it should be recalled that natural-law theory affirms not only that the existence of certain universal norms, but also the capacity of human beings, by natural reason, to apprehend these norms (to some extent).  Natural law is a theory of recognition as well as validity.  For all their differences, Aquinas, Locke, and Blackstone each agreed on this point.

As a theory of recognition, natural-law theory helps rebut three of the leading progressive arguments against originalism.  First, against the claim that the Constitution’s original understanding is unintelligible, natural law indicates the following: (1) that human beings, even across a large population and an extended territory, can understand one another’s moral purposes sufficiently to establish a bona-fide popular consensus, a consensus commonly known by the people and promulgated in a written constitution; (2) that this shared understanding can span not only a large republic, but also across time, so later generations can indeed know the meaning of prior generations; and (3) that judges, no less than other citizens, can know the content of this law.

Second, against the claim that originalism frustrates progress—that improvement that “naturally” comes with time–natural law answers that novelties are to be mistrusted.  Although recognizing the possibility of progress in moral knowledge, natural-law theory asserts that regress is just as likely.  To cite one prominent example, Aquinas insisted that human beings generally apprehended that theft was unlawful, but that at times reason can be “distorted by passion, or by evil habits, or by bad natural relations” such that individuals or communities can “fail to recognize theft as contrary to natural justice.”  This caution hinders judicial entrepreneurship, including disregard for long-established interpretation of the Constitution’s text.

Third, against the claim that judicial obedience to the original understanding is unreasonable, natural law indicates that this consensus not only is knowable, but obedience to it is reasonable.  Natural-law theory identifies this common apprehension of moral truths as not merely as a general sense or feeling, but as something pertaining to reason.  The existence of this common rational faculty suggests (1) that the people’s consensus reflects genuine knowledge (and not mere opinion or raw will—so-called “policy preferences”); and (2) that therefore the people, though uncredentialed, have a politically relevant knowledge to which judges, no matter how credentialed, can reasonably defer.  The people have the right to rule in part because they have some reason.  They have some capacity to write a constitution that is worthy of obedience.

Moreover, as a theory of validity as well as recognition, natural law helps to answer an argument that is frequently implied in progressive jurisprudence: that the obedience of the originalist judge is dishonorable.  Naked democratic positivism tends to reduce the judge to a mere discerner and follower of popular will; his simple and unattractive virtues are accuracy and humility before the masses.  Although the masses may embody the zeitgeist—a subrational will popular “reason” is not reason at all, and cannot compare with the genuine reason of the expert.  Why should the judge, with all his education and credentials, defer to the laws written by the subrational many?

Progressives offer the judge a far more glamorous role:  Consider, for instance, Justice Cardozo’s criticism of Justice Story: despite Story’s “vast erudition,” he lacked a “creative imagination.”  Rather, Cardozo argued, progressive judges should facilitate progress “with insight into social values and suppleness of need;” they should be “molders of policy instead of impersonal vehicles of revealed truth,” for “constitutional adjudication has always been statecraft.” [1]  As Cardozo asserted in a famous dissent, judges should read the Constitution not with “pedantic rigor”—that is, simple obedience—but with “elasticity of adjustment, in response to the practical necessities of government.” [2]

“[D]ue process” cannot be imprisoned within the treacherous limits of any formula. Representing a profound attitude of fairness between man and man, and more particularly between the individual and government, “due process” is compounded of history, reason, the past course of decisions, and stout confidence in the strength of the democratic faith which we profess. Due process is not a mechanical instrument. It is not a yardstick. It is a process. It is a delicate process of adjustment inescapably involving the exercise of judgment by those whom the Constitution entrusted with the unfolding of the process.[3]

The progressive jurist can thus be the bold entrepreneur, the skilled scientist, the creative artist, and even the revaluer of values—all rolled into one.

Frankfurter’s one-time adversary, Justice Brennan, said as much decades later: The Constitution consists in “majestic generalities and ennobling pronouncements” that are “both luminous and obscure.”  In the face of all this impressive light and darkness, the judge becomes both suffering servant and supreme ruler: he must accept the “lonely, troubling” task: to “resolve public controversies” so that “the present society change in a fundamental aspect.”  The progressive judge is not to obey the written record of the people’s own resolution of their controversies—that is, the Constitution and other law—but to resolve, and continuously re-resolve, the people’s controversies for them.

In contrast, Publius, in Federalist 78, assigned the judge a humble, even boring role.  The judge would be “inflexible and uniform” in interpreting the Constitution, and “bound down by strict rules and precedents.”  Fidelity, not creativity, would be the judicial virtue.

Natural law theory, if true, affords nobility to such uncreative fidelity.  According to the theory, the will of the many, as defined in law, can represent a participation, albeit imperfect, in Divine reason.  Judicial fidelity to a popular Constitution, then demands not humility before the masses, but piety before nature’s Author.  The piety of the faithful originalist might thus represent a virtue that can rival the glamorous creativity of the judicial artist.

Is the European Central Bank Constitutional?

Reasonable Regulation of the Right to a Jury Trial

Any theory that develops under parochial circumstances (legal scholars only) will be ripe for debunking.

The Four Horsemen of the Supreme Court