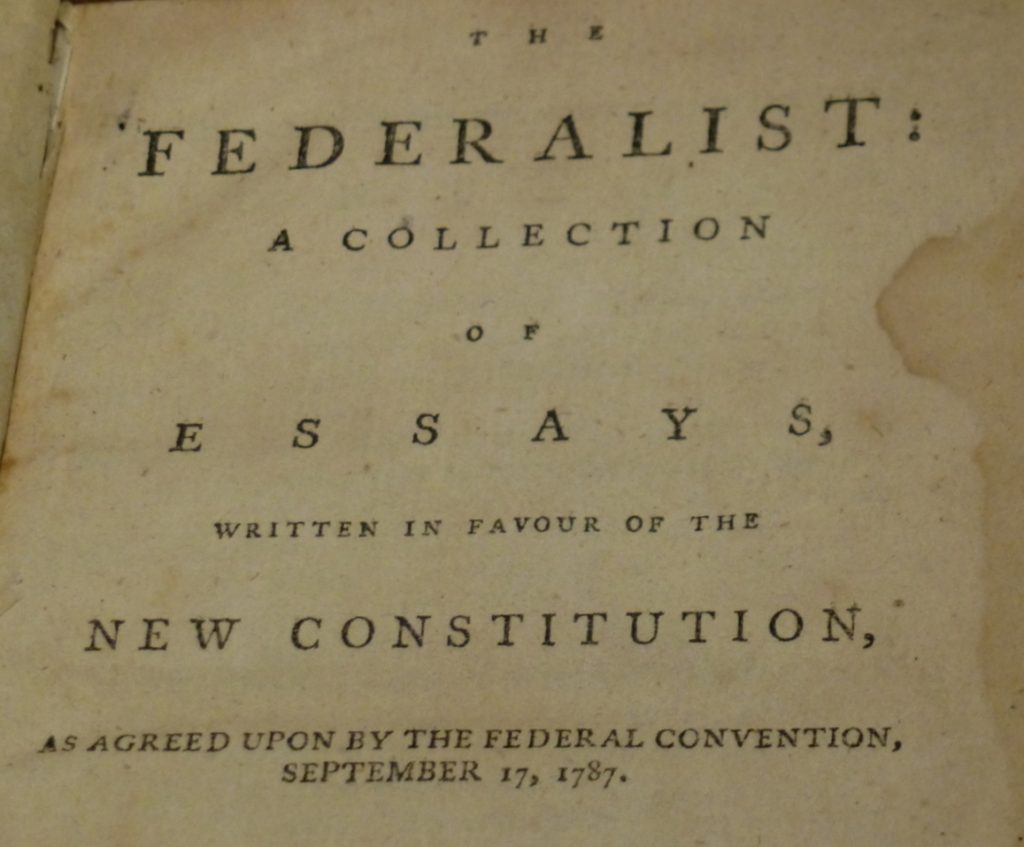 In The Federalist No. 51, James Madison develops a political analogue to the way Adam Smith’s “invisible hand” in the market channels self-interest to promote the public good. Akin to Smith, Madison argues that the structure of political institutions in separation-of-power systems channel ambition and self interest so that they reduce the risk of tyranny rather than promote it:

But the great security against a gradual concentration of the several powers in the same department, consists in giving to those who administer each department the necessary constitutional means and personal motives to resist encroachments of the others.  . . .  Ambition must be made to counteract ambition. The interest of the man must be connected with the constitutional rights of the place.  . .

This policy of supplying, by opposite and rival interests, the defect of better motives, might be traced through the whole system of human affairs, private as well as public. We see it particularly displayed in all the subordinate distributions of power, where the constant aim is to divide and arrange the several offices in such a manner as that each may be a check on the other — that the private interest of every individual may be a sentinel over the public rights. These inventions of prudence cannot be less requisite in the distribution of the supreme powers of the State.

While we can contest whether separated institutions sharing power in the U.S. constitutional system exercise too little or too much check and balance over the other institutions, Madison’s argument here seems intuitive and straight forward. With government officials holding the power of the sword, the unchecked government official might use his or her power to pursue private interests rather than the common good. Madison recognizes that not all, or even most, government officials would succumb to the temptation to use their power for personal gain. But he also recognizes that those officials who might be tempted use their power in that manner constitute a special problem not only for democratic government, but for any form of government. Therefore his discussion in Federalist No. 51 (and Federalist No. 10, and throughout The Federalist) highlights, or assumes, public officials as self-interested, ambitious people who need to have their power checked.

Madison and Hamilton do not posit that humans, or even the narrower set of politicians, are actuated only by self-interest and ambition. They discuss how politicians can and do reflect honor and virtue in their work as well. At critical points in developing the argument for separation of powers in the U.S. Constitution,  however, they focus on the need for a form of government that does not require virtuous people to be in charge all the time to survive, but can survive tolerably well even when the venal are in charge. As Madison puts it in The Federalist No. 10, “It is in vain to say that enlightened statesmen will be able to adjust these clashing interests, and render them all subservient to the public good. Enlightened statesmen will not always be at the helm.”

Publius’s methodology, as it were, is to consider the acid case of how the institutions work with ambitious, narrowly self-interested politicians not because he thinks it is an accurate, full-fledged anthropology of the nature of humans, but because what happens when those types of politicians are in charge are the situations that concerns us most. For him it is the critical test case, however, and so it suits his analytical purposes, as an institutional designer – as a political engineer – to test his design under this extreme assumption. If it survives the acid test, the implicit argument goes, then it’s a fit political design for conditions that would almost always be less extreme.

Publius – the nom de plume for Hamilton and Madison (and Jay) – focuses on a distinctive feature of human motivation not because he thinks that feature is all there is to humans all the time, but because he thinks it’s a salient feature of human motivation for the cases he’s most interested in considering. It’s not supposed to be an exhaustively, or even a largely, realistic account of the human person. It rather is an analytical convenience given the topic of concern. While we can be thankful for as often as we have a Cincinnatus in charge, those cases are, for Publius, uninteresting test cases for the topic of institutional design. As Madison notes in Federalist No. 51, “If angels were to govern men, neither external nor internal controls on government would be necessary.”

Why labor the point? A lot of scholarship in modern economics, political science, and sociology makes the same move that Publius does. Yet the move is viewed with suspicion, particularly when applied to human behavior outside of the confines of pecuniary exchange studied by economics. This suspicion, I think, comes mainly from not understanding the first move in rational-choice approaches to human behavior. (Also because the specialized definition of “rationality” is not understood, but that’s another discussion.) As with Publius’s assumption of self-interested behavior, rational-choice theorists don’t make the assumption because they believe every human action is the product of venality, but because the assumption allows them to “get at” specific questions or puzzles of interest. To be sure, rational-choice theorists sometimes invite this misinterpretation, but a misinterpretation it is.

Calvin Coolidge: A President Born on the Fourth of July

Going to War: Ancient and Modern