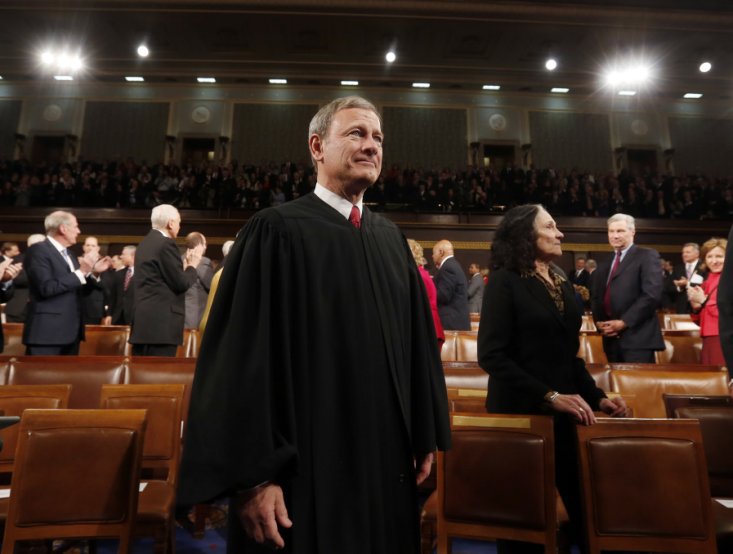 I spent most of my post-King yesterday trying 1) to suspend disbelief; 2) suppress laughter; and 3) explain this to my kids. Epic fail at all fronts. My hunch, or at any rate my fear, is that this will turn out very badly for the Chief—an honorable man, and a capable jurist who really should know better. Liberal commenters on King picked up immediately on the key point: this is a huge brush-back to any challenge to the Affordable Care Act. There’s an argument—not terribly convincing to my mind, but at least colorable—that the IRS interpretation of the ACA (“by the State” means “by the federal government,” and “under section 1311” means “under section 1321”) is permissible. Barely. And there may be an argument that the ACA, as actually written, is way too harsh on states, so Congress cannot have meant it. But the Chief’s opinion doesn’t take either course. Instead, it hardwires the administration’s position into the statute: it’s ambiguous for sure, but we know what it means. No future administration can adopt a different interpretation.

What this means in plaintext is: shut up. We the Court gave you the right-wing people a consolation prize the first time around: we re-wrote the statute one way to save it, and then we re-wrote it another way to help the states on the Medicaid jazz. NFIB v. Sebelius. You ingrates didn’t get the message; and so now, we’ll make you worse off than you would have been, had this lawsuit never been brought: this law now means what we say it means. Don’t try this again. The opinion doesn’t read like John Roberts. It reads like a hybrid between Barack “It’s the Law Unless I Suspend It” Obama and William “Shut Up He Explained” Rehnquist.

My beef, and I strongly suspect the tragedy, isn’t the Court’s departure from hallowed canons of textual construction (we can argue that point on this case until the lights go out, and in any event everyone knows the canons won’t hold in big cases). The problem is the horrendous misunderstanding of how this country works. You can tell people to buy insurance and states to run exchanges. But many won’t, and then the game is up.

And you can signal to lower courts, as the Court now has, that they should bury ACA cases on any pretense whatsoever. Respectfully, though: the notion that a stern warning from the Court will turn America into Denmark is absurd. The genius of this country is that we always have a Plan C and D. (I even know what they are, on account of the great privilege of serving on the Board of the Competitive Enterprise Institute. Indiana Attorney General Tom Fisher has already announced pending plans E and F; I embrace those, too.)

And there’s one more, related, and yet more harrowing point: maybe, Justice Scalia snarled in this dissent, we should call Obamcare “SCOTUSCare.” The truth is something that Justice Scalia can’t really say: it’s not the Court but the Chief. He alone wrote all those opinions, and he alone—not the Court—now owns the ACA.  What sentient human being would want that fate?

Unlike, perhaps, some of my fellow combatants, I entertain no doubts about the Chief’s integrity. His interest is the institution’s as he see it. He gets the law wrong because at some deeper level he gets this country wrong.

The Census and the Constitution

The Supreme Court’s New York decision is indicative of the high tide of litigation flowing against executive decisionmakers.

More on Liberal Justices Not Following the Party Line