Once again, the Solons collectively known as the U.S. Senate are considering reforms of Fannie and Freddie, the government-sponsored enterprises (“GSE”) that substantially contributed—and on some accounts caused—the housing bubble and subsequent financial collapse lo these few years ago. Nothing will come of it. The predictable failure invites deeper and darker thoughts.

On the upside, the GSE reform effort is led by Senator Bob Corker (R-TN) and Senator Mark Warner (D-VA), who are responsible human beings and actually understand this stuff. Moreover, there is no shortage of sensible reform options, wholesale or piecemeal. On the downside, no one expects any serious action before the next presidential election or financial calamity, whichever comes first.

For one thing, the GSEs are sending billions per year in the Treasury’s direction. They’re making money mostly by financing high debt-to-income loans to people who can’t afford them. (If that sounds familiar and disturbing, it should.) Dodd-Frank was supposed to stop this nonsense, but the intrepid Consumer Financial Protection Board (CFPB) has granted the GSEs (and FHA) an exemption. The politicians are desperate for revenue, however derived; and so away we go again.

For another, more distressing thing, the GSEs are intrinsically hard to unwind. Their mission is to insure private gains and to socialize losses. They and they alone can do that because Congress/taxpayers stand behind them, and so they occupy 90-plus percent of the housing finance market. That market is biggish, and so the potential gains attract tons of interests: realtors, the construction industries, banks, hedge funds, and so on ad nauseam (the GSEs themselves). Piecemeal reform will either limit the pool of available rents, which all interests will oppose; or else, reshuffle the rents within the pool. The only way to reform the system is to kill it. That ought to be done (economics aside) for reasons of political hygiene. But it can’t be done, either—not only for the public choice reasons just alluded to, but also for ideological reasons or rather delusions that transcend all interests and parties.

In recent congressional testimony, the incomparable Alex Pollock compared the U.S. housing finance system to that of other developed countries. The basic defense of the GSEs, Alex says,

begins with what I think is a valid proposition: that in a democracy it is advantageous to have widespread property ownership among the citizens. The experiences of other countries make it obvious that high home ownership levels can be attained without GSEs—and moreover without tax deductions for mortgage interest; without our very unusual practice of making mortgage loans into non-recourse debt; without government orders to make “creative”—that is riskier—mortgage loans, which were part of being a GSE; and with prepayment fees.

He then presents a table of home ownership in 28 economically advanced countries: 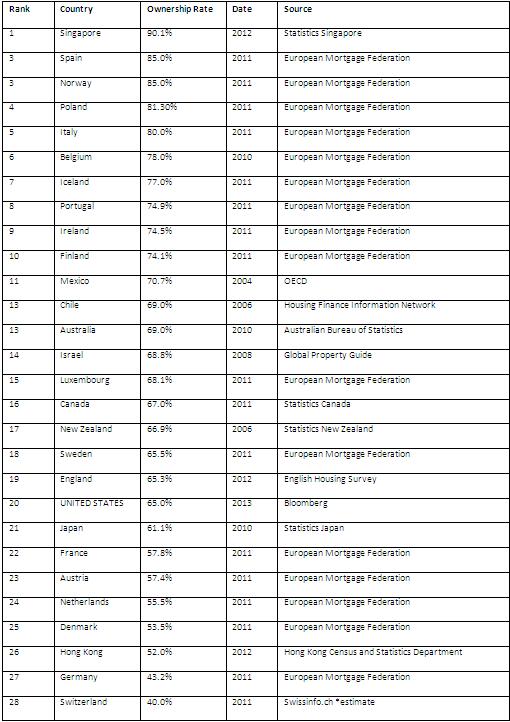 On first impression, the Table shows no discernible pattern. For example, you’d expect city states to have low ownership rates (because they can’t suburbanize). That’s true of Hong Kong; but then, there’s Singapore. You’d expect countries with similar political cultures to travel together; but that’s not true of Scandinavia or of France and its Benelux pilot fish. (Of course you could attribute that to different policy choices; but political culture models say that those are endogenous).

On second impression, two groups of countries do appear to be clustered: the Mediterranean countries (I’ve looked up the rate for Greece—it’s 80 percent); and the English speaking countries. A third pattern, not shown in the Table: homeownership rates in East Europe are huge. Poland is at the low end; Russia, Bulgaria, and Romania top the charts.

On third impression, Germany and Switzerland look like outliers. What else do they have in common? Answer, an addiction to hard money. Maybe that’s why they facilitate saving for homeownership but make sure that people have saved before they buy a home. Maybe they don’t want to create a constituency for easy money. And maybe that’s why they haven’t had a real estate bubble in eons.

The notion that ownership—of land, or some form of real property—is a defense against populism and tyranny is deeply engrained in our psyche: yeoman farmers against the proletarian rabble, and all that. Whichever way you slice the cross-country data, though, there’s actually very little support that home ownership correlates with—let alone promotes—democratic stability. If anything, the data suggest that ownership rates are inversely correlated with political stability and the rule of law. All else equal, that actually makes sense. In a corrupt regime, you invest in stuff that’s hard to steal. In a rule-of-law regime with stable money, you invest in what makes sense, and an illiquid piece of real estate may not be your best bet.

Any way you look at it, though, the true outlier is the United States. As Alex Pollock explains, no other country has GSEs: they subsidize or incentivize homeownership outright (or else, don’t do it at all). We, instead, mobilize Jeffersonian tropes to practice socialism, on a scale that is unimaginable even to Danes.

On this view and evidence, America’s exceptionalism is not to have escaped collectivist demands. Au contraire: We are the only developed country without a private housing finance market (except for the filthy rich). We are simply better (1) at lying to ourselves and (2) at dishing out the proceeds of a socialized system to nominally private interests (banks etc), under (3) the pretense of promoting private ownership and independence.

Our pseudo-private system may be the most formidable, impregnable formula for socialism ever invented, and it may support Fannie and Freddie from here to eternity. Only in America.

The Danger of Constitutionalizing Policy Disputes: A Response to David Upham

There is plenty of risk and uncertainty that might give rise to our next financial crisis.

The Fed in Action

A Constitutionalist Grows in Washington

The current tariffs are not what is most important; the authority of lawmakers is.