Early in one of the best sports movies, Knute Rockne, All-American, the immigrant kid Knute learns to play football with the neighborhood boys, including a black one.  The logic of the movie, following the recognition of Catholics in higher education, is that the opportunities will open up for blacks, too. 42, another biopic of baseball star and civil rights pioneer Jackie Robinson, takes the next step from that classic.

Frankly proclaiming Robinson’s importance for America, Brooklyn Dodgers owner Branch Rickey opens the movie by declaring to his assistant, “I have a plan.”  In fact Rickey and Robinson deserve comparison with Martin Luther King. Claiming to be interested in winning and thus in profits, Rickey’s signing of Robinson exemplifies Tocqueville’s observation that Americans say that they are interested in profit but in fact often have higher motives. He is Tocqueville’s American, a self-professed Methodist focused on acting righteously, doing good while doing well.Robinson is his perfect choice to integrate baseball. In addition to his baseball skills, the Californian is a WW II army officer and a four-letter athlete at UCLA. But can he control his temper, which led him to a court-martial for protesting racial segregation in the army? We know the end of the story.

As much as he needs to prove his talent, Robinson must display restraint. “God built me to last,” and he is severely tested. Rickey recalls Christ’s “forty days in the wilderness.” Robinson portrays Uncle Tom as Harriet Beecher Stowe intended him to be known—a Christian martyr and, with George Washington, an American founder.  He exemplifies the theologico-political question of how one should live one’s life, a person of faith or citizen? He does both.

However cloying some may find such moralizing to be, baseball of all sports cries out for it. Recall Susan Sarandon’s Bull Durham paean to “the church of baseball.” In introducing young professionals from Europe to baseball, in Carl Yastrzemski’s last game against the Angels, I was told by one astonished but appreciative spectator that she thought she was at a church service. 42 takes full advantage of the parallels. 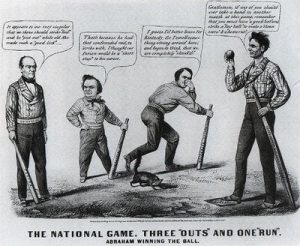 Among numerous penetrating accounts of baseball, such as those by Jacques Barzun, George Will, and Willmoore Kendall, political theorist Diana Schaub’s essay for National Affairs  stands out for the connections it makes between American politics and mores and the former national pastime. “Baseball is a mirror of American liberty and of the virtues necessary to sustain it.” It’s a game of rules, but “Justice is not reducible to the rules …. Hurling invective at ‘His Umps’ readies one for bad Supreme Court decisions.”

Schaub explores the early national popularity of baseball, demonstrated in this political cartoon of the 1860 election which I add to her argument. According to her, “Abraham Lincoln had a baseball diamond built behind the White House and often joined his sons and their friends in playing ball.”  She makes daring political and moral claims for baseball: “Admittedly, the decline of baseball is not the worst effect of fatherlessness. Drugs, delinquency, and despair are all worse. Nonetheless, black alienation from baseball is part of the collateral damage. And if, as I believe, baseball has a moral and civic dimension, then indifference to baseball is not just an unfortunate byproduct of fatherlessness, but a serious loss in its own right.”

Informed by Schaub’s baseball savvy, we come to see how Robinson should be ranked with King—he starred in the national pastime and affirmed to Americans the founding principle of human equality, a principle reinforced by the rules of the game. 42 shows a real man at work, as ballplayer and citizen.

The Many Confusions of Brown v. Board

Brown v. Board is one of the most important decisions of the 20th century, but it rests on deeply confused logic.