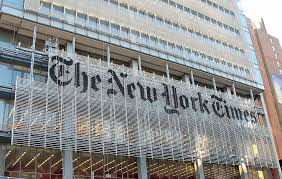 Jonathan Adler notes that the New York Times has changed its position on filibusters of appointees:

It is time to end the ability of a single senator, or group of senators, to block the confirmation process by threatening a filibuster, which can be overcome only by the vote of 60 senators. We agree with President Obama’s call in the State of the Union address for the Senate to change its rules and require votes on judicial and executive nominees within 90 days.

This is a major change of position for us, and we came to it reluctantly. The filibuster has sometimes been the only way to deny life terms on the federal bench to extremist or unqualified judges. But the paralysis has become so dire that we see no other solution.

There are several ways to view the Times’s change in position.  First, one might see it as pure politics.  The Times is just acting like a political hack, endorsing filibusters when the Democrats do it to Republican nominees, but not when Republicans do it to Democratic nominees.   Second, one might see the paper as unaware of its bias.  Filibusters really do seem worse to the Times when done by Republicans.  Third, one might believe that the Times is right that the Republican are abusing their power more than the Democrats did.

My guess is that it is a combination of the first two views.  Supporting the second view is that the Times never attempts to address the issue.  It never says, “Well, we recognize that we are against filibusters when it helps our guys and against it when it hurts our guys.  We could be biased, but we don’t think so and here is why.”  Not exactly an introspective or soul searching essay by the Times.

The Times attempts to justify its change in position based on the third possibility.  But their argument seems weak.  For example, somehow the enormously important Democratic  filibuster of Miguel Estrada, who likely would have been a Supreme Court nominee by George Bush, is omitted by the Times.  By the way, cloture votes were taken to end the Estrada filibuster at least seven times but to no avail.

For what it is worth.  I differ with Jonathan on the Senate’s role in the appointment process for judges.  I don’t think there is anything unconstitutional or improper about filibustering nominees.  Nor do I believe the Senate should necessarily vote to confirm qualified nominees if they disagree with the nominee’s legal philosophy.  There is nothing in the Constitution that requires the Senate to defer to the President.

That said, I believe the best arrangement governing nominees is as follows: Lower court judges should be subject to a majority confirmation rule.  Thus, they should not be subject to being filibustered.  Supreme Court Justices, however, should be subject to a supermajority rule for confirmation.  They have enormous power and there is a benefit from having the more centrist justices that a supermajority rule would produce.  I defend this arrangement in these two articles written with John McGinnis.

This arrangement should be adopted through an agreement by both parties and now would be a good time to do so.   As Jonathan suggests, no one knows who will win the next Presidential election or hold a majority in the Senate.  Thus, an agreement to establish the arrangement in January 2013 would be possible if there were support for it.  But there is no real support for a supermajority rule for Supreme Court appointments.  I don’t even think there is Senate support to eliminate filibusters of lower court judges.

So, if Romney wins the Presidency and the Republicans take the Senate, one can be confident that the Democrats will filibuster Romney’s nominees.  The only real question is what the Times will say about it.

Defenders of liberty need to find new ways to restrain government's regulatory power, and supermajority rules are a path to doing this.

The most significant developments in the past year suggest a potent originalist future.

Sandy Levinson on Our Constitution