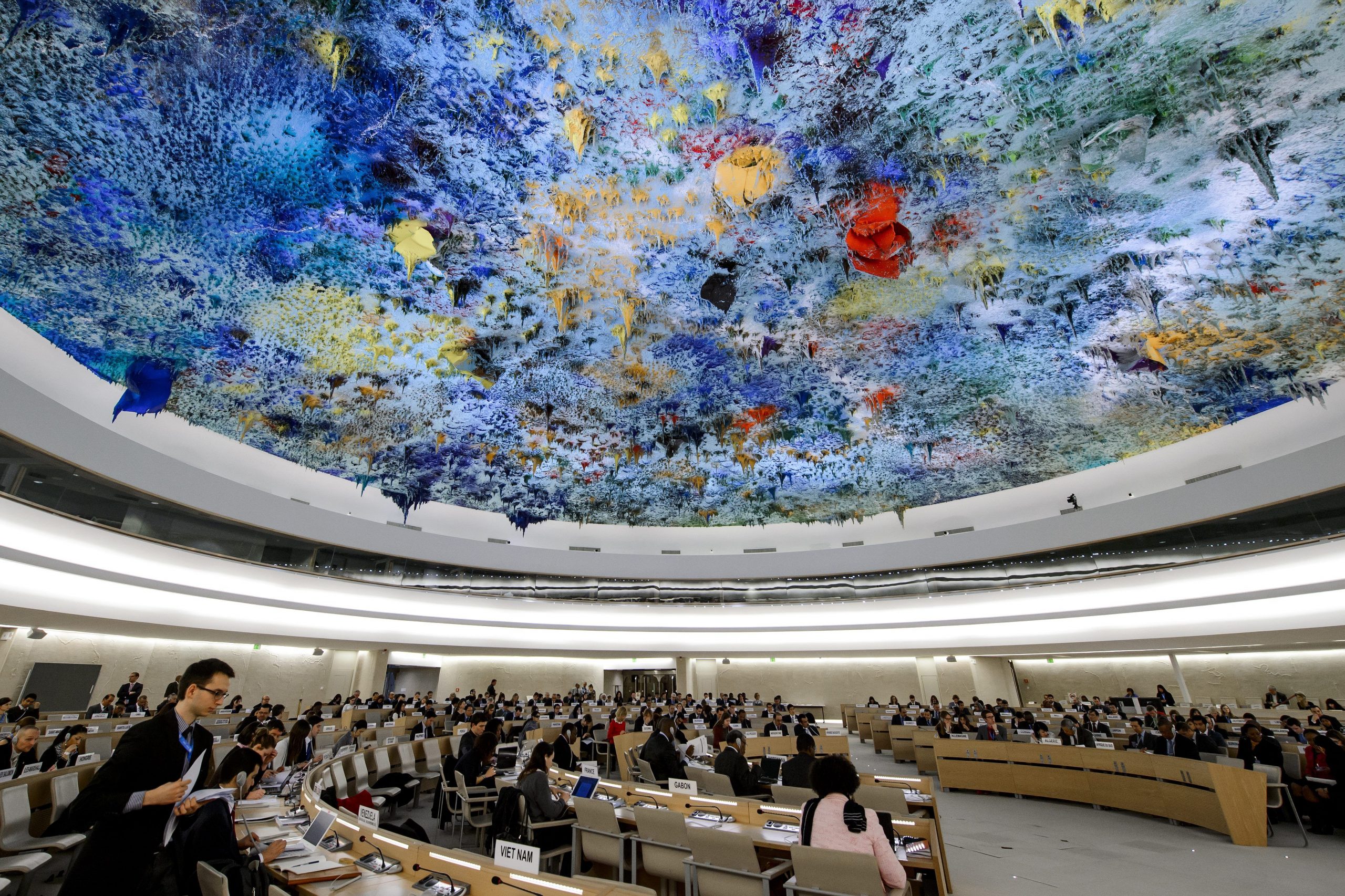 The UN Human Rights Council hears a recent report on the rights situation in the Palestinian territories occupied by Israel since 1967. (FABRICE COFFRINI/AFP/Getty Images)

At a recent emergency session to discuss Israel’s military operation against Hamas, the U.N. Human Rights Council adopted a resolution—proposed by Palestine, which enjoys observer status there—to convene a special enquiry into whether Israel has been guilty of any war crimes in its current action in Gaza.

Speaking during the proceedings, at which, among the Council’s 47 members, only the United States voted against the resolution, Navanethem Pillay, the U.N. High Commissioner for Human Rights, remarked of the Israeli Defense Forces operation in Gaza:

There seems to be a strong possibility that international law has been violated in a manner that could amount to war crimes.

Ms. Pillay, a former South African judge, has a remarkable record of scenting out when there have been human rights violations. Back in 1994, when being considered for appointment to South Africa’s Constitutional Court, she expressed concern about her country’s including a right to life in its constitution on the grounds that it could then be invoked to block abortions. Indeed upon her appointment as High Commissioner, one of Ms. Pillay’s first steps in office was to issue a document calling for governments to criminalize opposition to abortion.

Now, it is true that, as a direct result of Israel’s military action in recent weeks, hundreds of Palestinians have been killed in Gaza, many of whom will undoubtedly have been perfectly innocent non-combatants each of whose deaths is a tragedy and not to be taken lightly. However, for the human rights council to single out Israel for investigation, when for weeks beforehand Hamas has been raining down rockets on it quite indiscriminately, and, what’s more, doing so from schools, hospitals and mosques where retaliation is bound to result in civilian casualties, is—how shall we put this?—a trifle selective and partial.

To single Israel out for investigation for war crimes is even more selective given that far many more innocent people have been indiscriminately killed in recent times in Egypt and Syria than in Gaza. Yet there have been no corresponding calls for inquiries about war crimes in those cases.

The human rights council’s selective treatment of Israel, however, is nothing new. As was noted in a speech at its fourth session in 2007 by former Canadian attorney Hillel Neuer, who led, and leads, the Geneva-based NGO, U.N. Watch:

Faced with compelling reports from around the world of torture, persecution, and violence . . . what has the Council pronounced, and what has it decided?

It has enacted one resolution after another condemning one single state: Israel. In eight pronouncements—and there will be three more this session—Hamas and Hezbollah have been granted impunity. The entire rest of the world—millions upon millions of victims, in 191 countries—continue to go ignored.

Mr. Neuer addressed last week’s session of the human rights council to the same effect. Of the resolution calling for a special investigation of possible war crimes by Israel, he pointedly inquired:

Is it possible that the true purpose of the session is to silence the true victims and voices of human rights [violations] by deflecting attention from the world’s worst abuses?

If those who refuse to speak out for Palestinians—1,800 Palestinians, if not more—who were starved to death by Assad in Syria but only when Israel can be blamed, then you are not for human rights but only anti-Israel.

While delivering his six-minute address, Mr. Neuer was interrupted by objections from representatives of Egypt, Iran, Venezuela, Cuba, and Syria. His speech, plus these objections, are well worth watching for the volumes they speak about the levels of hypocrisy and deceitfulness to which international concerns about human rights have descended at the United Nations. They are capped only by the 1988 founding Charter of Hamas whose 31st article states:

The Islamic Resistance Movement is a humanistic movement. It takes care of human rights and is guided by Islamic tolerance when dealing with the followers of other religions. It does not antagonize anyone of them except if it is antagonized by it or stands in its way to hamper its moves and waste its efforts.

It is the duty of the followers of other religions to stop disputing the sovereignty of Islam in this region . . .

Bill Levin on The Aftermath of Halbig

The Nation and the Bible

The Bible teaches first that God, and not the nations, is sovereign over national borders, and yet, nations have a real purpose.

Magna Carta at 800: A Continuing Inspiration