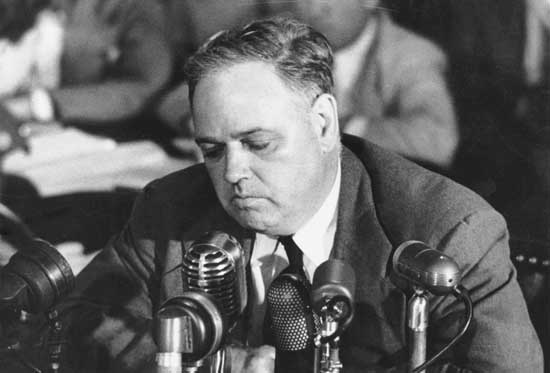 In 1948, when confronted with a cache of damning documents in his handwriting and typescript collected a decade before by his then-comrade Whittaker Chambers, Alger Hiss, a lawyer, State Department official, and a Soviet spy code-named ALES, responded in the following fashion: “I immediately directed that the papers be turned over to the Department of Justice, as it was evident that they were copies and summaries of State Department documents which warranted inquiry.”

Contrast this with Chambers’ response when the documents’ authenticity was challenged. His government benefactor, Rep. Richard Nixon (R-Cal.), submitted the microfilmed portions of the cache to a photographic expert to determine their date. Chambers’ claim that they were from the time, in the 1930s, when he and Hiss worked for Soviet military intelligence, was rejected by said expert, who determined that the kind of film used was a new product. In other words this particular evidence, at least, had to have been faked. When a worried Nixon threw that at Chambers, his response was that “God must be against me.” (It turned to be a temporary setback, for the expert had been wrong that such film wasn’t being manufactured in the 1930s.)

Note the difference in the men’s responses. Hiss’s was very take-charge; Chambers’ was that of a man in the hands of larger forces. Chambers had held the Bolshevik view that individuals are carried along by History rather than in control of it; he now, with a sense of tragic resignation, saw himself in the hands of the Almighty. Hiss, who stayed in touch with Moscow Center long after Chambers left it, never completely shed the mindset of a government official who can control events.

The lawyer and the faith-based journalist who faced off against one another before Congress and in court present themselves true to respective form in their autobiographies.

In the Court of Public Opinion (1957), Hiss’s post-prison memoir, sticks in a very technical way to the legal aspects of the case. This legalism, which gave off a decorous formality rather than a desperate need for exoneration, was characterized by radical, anti-Hiss journalist Dwight McDonald as “to the point of madness.” And this cut-and-dried, confident tone never left Hiss. During the trial, it was displayed when he “directed” the government to look beyond the mounting evidence and compare reputation (Hiss’s was stellar, and included words of support from two former Supreme Court justices). After the trial, he calmly pressed and pressed on the theory that he had been framed by a cabal composed of the FBI, anticommunists, and big business. Sympathetic reviewers, expecting outrage or any human emotion, were disappointed and pronounced Hiss an enigma.

In stark contrast we have Chambers and his landmark personal statement, Witness, one of the great autobiographies of the 20th century. Penned in 1952, re-released this year in paperback from Regnery, it presented the world with a personality and mind that are unique, and not completely attractive to either liberals or conservatives. If there was a thesis to Witness, it was that the Cold War was really about communism’s faith in man pitted against Christianity’s faith in God. Chambers as much as said that it was only ex-communists who could effectively fight communism. His emphasis on this was and is off-putting to many.

Liberals, accepting that Hiss was guilty, nevertheless recoiled from Chambers’ focus on born-agains. Sidney Hook, an anti-Stalinist who remained a man of the Left all his life, criticized Chambers for “recklessly” lumping atheistic anticommunists in with the communists. Conservatives, while agreeing with Chambers’ view that the New Deal sought the same kind of revolution as the communists, nevertheless had trouble wrapping their head completely around Witness. William F. Buckley couldn’t accept Chambers’ view that anticommunists were on the losing side of History; nor were Buckley or some other activists on the Right happy with Whittaker Chambers’ critical view of Joseph McCarthy as a “raven of disaster.” Ronald Reagan, probably the most optimistic of conservatives, in awarding Chambers a posthumous Presidential Medal of Freedom, had to cherry-pick passages from Witness that did not bear the book’s signature pessimism.

Almost all, though, agreed that Witness was not the product of an American mind. Structuring the book around the Lazarus motif, Chambers exhibited, in the words of Arthur Schlesinger, Jr. an “un-American . . . or at least un-Anglo-Saxon intensity.” Chambers’ biographer Sam Tanenhaus seconded this. When given the opportunity upon the re-release of his book to amend it, he chose the new subtitle of “An Un-American Life.”

The Huguenot background of Chambers’ maternal grandmother is described in Witness, and also this majestic woman’s habit of “breaking into rippling French, in which she thought almost as easily as English.” Teaching her grandson to read French, she launched the future translator of Felix Salten’s Bambi –and the GRU courier who, having studied German, French, Spanish, and Italian, could also make himself sound Russian to disguise his identity from his underground associates—into a life that was, if not European, European-ish.

Nonetheless, I would submit that Witness was very much in the American vein. It is a time-capsule document of America circa 1952. Reading it, one can feel what it must have been like to watch communism acquiring half of Europe, all of China, an atomic bomb. Lack of confidence that the democracies could do anything about these developments was already being voiced by the more middle class and especially working class sections of the American public. In his portrayal of himself as a David fighting a pro-Hiss establishment Goliath, Chambers sounded a populist note not unlike the films of Frank Capra; he was Mr. Smith versus a corrupt government. He had formulated the silent majority versus the Eastern establishment long before the politician Nixon—in many ways Chambers’ protégé—exploited it.

This Americanism is with us still. Chambers’ religious bent (he eventually worshiped with the Quakers, picking up another thread of his family background) prefigured what we today call social conservatism. His recounting of how, examining the marvelous shape and structure of his baby daughter’s ear caused him to sense a Creator, would play well in today’s pro-life movement.

In the end, of course, his uniqueness defies ideological classification. He never embraced free-market economics, slammed the vulgarity of Ayn Rand’s brand of libertarianism as “godless materialism” cut from the same cloth as Marxism-Leninism, and supported the price controls and other Progressive measures enacted by the New Deal.

Still he was an American, and what American is not, in some sense, a libertarian? In his time, he alienated fellow National Review writers by denouncing the government’s wire-tapping of communists. In the manner of today’s civil libertarians, he noted that such actions could be used against anticommunists should the Left assume control of the government. He also spoke out against the convicted Alger Hiss’s being denied a U.S. passport.

Some conservatives today would denounce Chambers’ tactical, rather than principled, support of the Republican Party. “I am an Org man,” he once told a frustrated Bill Buckley. After observing the junior Senator from Wisconsin at close quarters, he withdrew his support from McCarthy because he knew his antics would harm the cause of anticommunism. He urged Buckley to abandon his third-party attempts to unseat Eisenhower in the 1956 election as politically disastrous.

It is perhaps fortunate that he is not alive today. Jihadi haters of the West, the Enlightenment, and the “Great Satan,” the United States, are attacking a West that is basically post-Christian and quite possibly not up to the fight. It would have embittered and chagrined him to see the (to him, unexpected) triumph of democracy over Soviet totalitarianism, give way to a battle between democracy and a religious form of totalitarianism.

The further irony, for him, would have been that godliness did not defeat communism as much as did Western armaments, U.S. covert operations against Soviet industry, the rebelliousness behind the Iron Curtain born of sheer material deprivation, and the Kremlin’s own loss of doctrinal faith during the Gorbachev era. Still, Witness retains its value today. It is perhaps the best examination of why men embrace communism and why some hew to it.

For the many nostalgic conservatives with strong emotional investments in Buckley, the fading familiarity with him among his countrymen hurts a little.

George Will laments that conservatism has been “hijacked” by “scowling primitives” and “vulgarians.”

Four Heads and One Heart