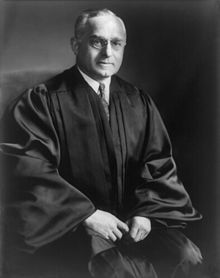 A century ago, a brilliant young lawyer named Felix Frankfurter spoke at the 25th anniversary of the Harvard Law Review.  His speech was entitled “The Zeitgeist and the Judiciary.”

At 30, Frankfurter was already a central figure in progressive circles, and would prove one of the most influential American jurists of the 20th century.  During the first quarter-century of his adult life, he maintained a regular correspondence with Justice Holmes, regularly wrote legal commentary for Herbert Croly’s new magazine, The New Republic, co-founded the ACLU, and served as advisor to Franklin Roosevelt.  In the next quarter-century (1939-1963), he became one of the most influential and prolific Supreme Court justices in American history.

“The Zeitgeist and the Judiciary” is a remarkable exemplar of  early progressive jurisprudence.  His brief, candid remarks display the main aspects of the progressive political and constitutional project.  The speech is thus important reading for any study of “the living constitution”—especially its original intent.

As the title of the speech indicates, before World War I, progressives were not shy in acknowledging the German, and more specifically, Hegelian, sources of progressive thought.  There was no pretense that “the living constitution” was rooted in the Anglo-American legal tradition.  Rather, Frankfurter expressly identified the “Zeitgeist” as the authority to be obeyed.  This Spirit represented a supra-rational force, whose will was evinced by two facts: “actual conditions of life and current dominant public opinion.”   This Spirit was not to be quenched, he insisted, but “allowed to flood the sympathies and the intelligence” of all political officials, including judges.

Due respect for the Zeitgeist mandated, above all, a flexible, mutable politics; as times changed, so too should both the means and ends of government.  Now the American Founders had declared that all legitimate government, in all times and places, had a fixed end: the security of certain natural rights.  Progressives like Frankfurter countered that government was a “living” thing, and thus “constantly changing and developing to meet new conditions and to accomplish new purposes.”  Accordingly, “so-called immutable principles,” like natural rights, must yield to the Zeitgeist.

While the Zeitgeist set the agenda, the discerning and implementation of this Spirit required scientific knowledge, acquired and applied through experimentation.  According to Frankfurter, the “business of statesmanship” was to act “experimentally” and with “the scientific attitude,” for “legislation is essentially empirical, experimental.”

Constitutional law, in this understanding, played, at best, a subordinate and peripheral role.  In reviewing experimental legislation, the courts were to rely primarily not on “legal principles” or “law books,” but on the “facts of life,” such as the evidence “marshaled with overwhelming force by Louis D. Brandeis” in his famous successful brief in Muller v. Oregon.  Mere “shibboleths,” like “liberty of contract,” must be discarded in deference to “the conditions of life.”

Indeed, these “conditions” (a favorite term for progressives) represented a power higher than the Constitution.  The Constitution had to justify itself before the bar of political philosophy; the Constitution’s very legitimacy depended on its congeniality with the scientific implementation of the Zeitgeist.  Accordingly, Frankfurter decreed that any policy “reasonably defensible on economic or social grounds, whether or not it accords with our individual notions of economics, cannot be offensive on constitutional grounds.” Happily, Frankfurter announced, our Constitution reflected no particular economic theory, posed no obstacle to such experimentation, and thus passed the test.

Perhaps the most prophetic feature of Frankfurter’s address is the central question tacitly raised but not answered: if the democratic Zeitgeist is to reign, if law, with its “general principles” and “well-worn phrases” is to be subordinated to scientific “facts,” what, if anything, is the role of judicial review?  Frankfurter’s speech suggested at least three radically different answers.

First and foremost, his theory would seem to say, “Your honor, please just get out of the way.  As a judge you are ill-equipped to either express or scientifically implement the Zeitgeist.  After all, the people at large, not unelected judges, provide the expression, through all the media of progressive democracy: ‘movements,’ ‘demonstrations,’ referenda, etc.  Further, the scientific implementation of this Spirit needs economists, sociologists, and other trained social scientists, not judges.”

Second, however, judicial review might assign the judge a limited role: the faithful laboratory assistant.  While such an assistant would generally defer to the will of the people and the  judgment of the scientific administrator, the assistant might occasionally  intervene in the name of History and Science. Most notably, while the judge might readily endorse all economic legislation, he would closely scrutinize laws affecting the freedom of expression.  While “liberty of contract” frustrated progress, freedom of opinion and expression facilitated and even accelerated it.

Stated otherwise, the faithful assistant would generally defer to the people and the social scientist.  Still, the judge could intervene to protect free expression, and thus facilitate the Spirit and protect the lab equipment against a (temporarily!) mad scientist.

Third, judges may tire altogether of any subordinate role.  They may fancy themselves the very experts needed, both to discern the Spirit and scientifically implement its agenda.    A judge would then rightfully overturn laws, whether old or new, on the grounds that they were not authentic expressions of the Spirit, or did not reflect good social science.  The most hated law would be a measure “rolling back” any past progress.  Such legislation represented an outrage–a crime against History.

In subsequent decades, progressive judges adopted each of these approaches.  Frankfurter himself arguably played each role.  Although remembered as an advocate of judicial restraint, even in this early speech, he plainly contemplated that judges might take a proactive role in implementing History.  The courts, he said, should still act to “restrain unwise legislative action” unfounded “upon adequately ascertained facts.”

Why have progressive jurists inclined toward the third role?  Why have they proved so  unwilling to remain laboratory assistants—faithful to the democratic Zeitgeist and deferential to the social scientists?  The answer may lie not in progressive thought, but in a very non-progressive notion: the intractable vanity and ambition of human nature.

A Postmodern Science of Administration

Sunstein’s False Claim that Scalia Was a Living Constitutionalist

The Logic of Progressive Legal Infidelity