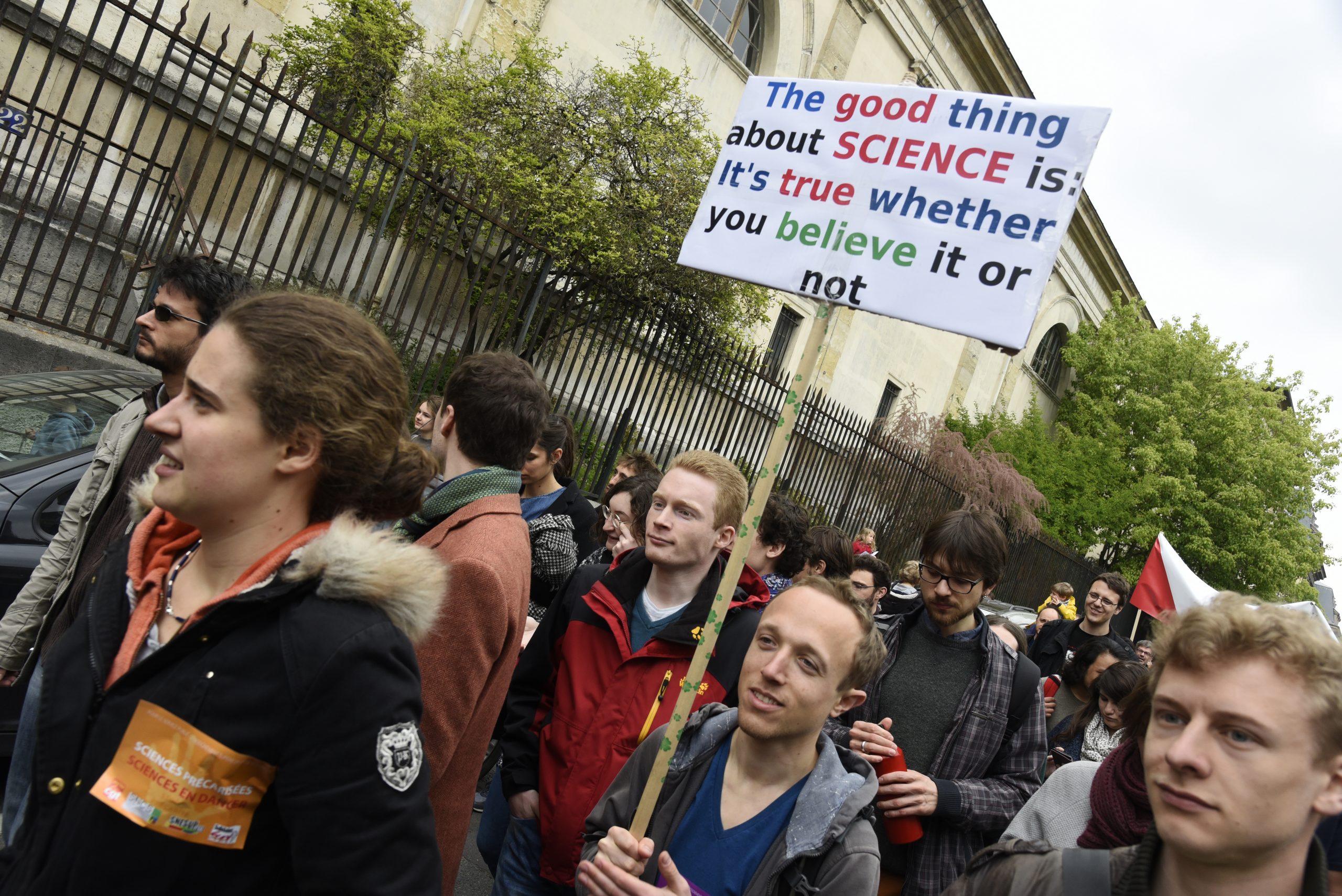 March for Science protesters march to demonstrate on April 22, 2017 in Paris. (Photo by John van Hasselt/Corbis via Getty Images)

The problem with convening a March for Prudence is that the prudent—being otherwise occupied and believing public views should be mediated through representation—would never attend. But after the unbounded rhetoric of the March for Science, one wonders if prudence dictates, on this one occasion, marching after all.

That is not to deny science—what with antibiotics and the intrinsic beauty of understanding and all—its due. It is to deny it beyond its due, which is the authority to rule tyrannically over the realm of the indeterminate, where politics dwells and prudence reigns. And it is to deny the intellectual heresy in which many of the marchers engaged: scientism—not the use but the worship of scientific reasoning.

To be sure, many political issues can be informed by knowledge gathered scientifically. But even so, political judgment with regard to this knowledge usually entails choosing “as among evils,” in Edmund Burke’s words. Decisions often have to be made between shades of gray in which there may be no objective right. An objective right that did exist might not reveal itself, and it might not be healthy for republican society if it did.

The problem is not with science but with scientism, an unquestioning reverence that refuses to recognize the inherent limits of human knowing. Bill Nye, who should not be regarded as a serious scientist or as a proxy for those who are, approached such ecstasies in his wildly applauded speech at the April 22 event in Washington:

We are marching today to remind people everywhere—our lawmakers, especially—of the significance of science for our health and prosperity. The process of science has enabled humankind to discover the laws of nature. This understanding has, in turn, has enabled us to feed and care for the world’s billions, build great cities, establish effective governments, create global transportation systems, explore outer space, and know the cosmos.

Science, then, did it all? No moral feeling is involved in feeding and caring for the world’s billions? No aspiration to greatness is necessary to build great cities or explore outer space?

And what, exactly, does it mean that science “enabled us” to “establish effective governments”? The aspiration to scientific politics has far more often been associated with abuse of power.

Thomas Hobbes sought to replicate in politics the scientific method of Francis Bacon, seeing human beings as mere “bodies in motion” governed by the same laws of aversion and attraction that ruled the physical universe. His project originated in science and terminated in an all-powerful Leviathan.

The French Revolution was steeped in the rationalism of the French Enlightenment. It produced unholy bloodshed and proto-totalitarianism. The early Progressive movement’s ambition for “scientific legislation” helped to license eugenics.

This is science unbounded by prudence or moral feeling. That is not, in fairness, what the March for Science demanded, although it seems telling that its “Core Principles” omit any mention whatsoever of scientific ethics. The closest to a moral commitment is the obligatory dogma about “diversity and inclusion” for the ever-growing litany of ever-smaller groups as well as condemnation of abuses of science that would “harm and oppress marginalized communities,” the solution for which is . . . more science, which is to say “data to understand how systemic bias and discrimination impact our communities and how best to change it.”

What the Core Principles do seek is “evidence-based policy and regulations in the public interest”:

Science observes and asks questions about the world. Our understanding is constantly changing, presenting us with new questions and answers. Science gives us the ability to examine these questions, enabling us to craft improved policies and regulations that serve our best interests. Political decision-making that impacts the lives of Americans and the world at large should make use of peer-reviewed evidence and scientific consensus, not personal whims and decrees.

Note the antithesis: One either uses peer-reviewed evidence (which any veteran of peer review knows is a process governed by caprice) and scientific consensus, or one is operating on whims and decrees. There is no room in this picture for prudence, still less for the gray indeterminacies that are the stuff of most politics. Science is to provide certain answers for it all.

This kind of excessive confidence is why hyper-rationalism is prone to Jacobinism. There is every reason to moderate and accommodate oneself to the views of others in the hazy realms of prudence but little reason to tolerate, and every reason to deplore, the irrational. The irrational demands to be broken to the saddle of science and reeducated.

While science clearly, again, has a role to play in public policy, these particular scientists might, if they were to pay attention to their own pieties about objectivity, drop from their manifesto the agitprop about “systems of privilege” and “special interests.” On their own account, scientific investigation is good for discovering “how systemic bias and discrimination impact our communities.” The conclusion about the existence of bias has—in violation of the aforesaid pieties—been reached in advance.

The worst part is that this misconceives the prudent and grounded role of science in public policy, which is not in its conception but rather in its evaluation. Daniel Patrick Moynihan, a champion of the use of evidence in public policy, understood the difference: “[T]he role of social science lies not in the formulation of social policy, but in the measurement of its results. The great questions of government have to do not with what will work, but with what does work.” (Emphasis in original).

Moynihan saw this retrospection as a defining feature of the Founders’ political science:

The difference is that forward-looking science is not bound by the “collected reason of ages” that Burke understood experience to compile. Its prospection removes limits, all the more so because it has the added confidence of believing itself to be based on the sole legitimate form of knowing. Retrospection is inherently grounded in empirical circumstance.

Of course, a genuine science should recognize the limits of its own knowing and—rather than indulging such reveries as (Nye again) its ability to “SAVE THE WORLD!”—speak with modesty about its own capacities. But this is reason leavened with prudence, and prudence is ultimately a moral capacity. The brain alone (celebrated in the obligatory hats of the Marchers for Science) cannot account for it. Perhaps, at the March for Prudence, the official headgear should be knitted in shades of gray.

How Do You Enforce Responsibility?

“All Must Be Tolerated”: Teresa Bejan’s Mere Civility, Part I

Hobbes and Locke offer echoes of standard liberal approaches to civility, but Roger Williams may offer a better sort of civility.

There’s been a lot of talk that our federalism might come to look like the EU, with Illinois starring in the role of Greece or Italy. However, the institutional differences are far too great for meaningful comparison. For example, Chancellor Merkel can depose the Italian Prime Minister with a phone call; our Constitution does not give the President, the Congress, or for that matter the National Governors Association any such agency in the affairs of a member-state. For another example, the EU (outside the egregious but fairly small Common Agricultural Policy and a few other slush funds) isn’t a transfer union. Our federalism is or rather has become that sort of union. That doesn’t mean we have a smaller problem than the EU; it just means that we have a different problem. For purposes of comparison and instruction, you want to look at a federal system that shares our problem. Come visit Argentina: you’ll see the future, and it doesn’t work. Read more