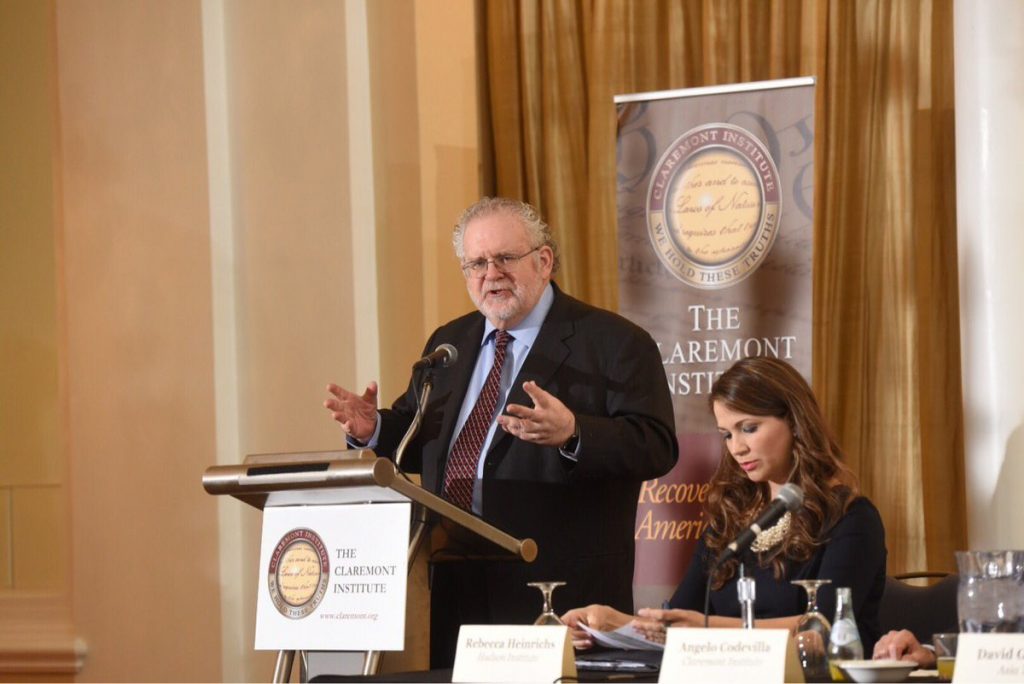 If Hillary Clinton were President, conservative scholars and journalists would know what to say about the current state of American politics, the Republican Party, and conservatism. With Trump, all is in flux. It might explain why awkwardness and a talking-past-each-other quality would be the impressions left by a panel discussion in Washington that the Claremont Institute sponsored last week.

The institute, located in California, not Washington, is nonetheless being spoken of as “the academic home of Trumpism.” (See this piece in the Chronicle of Higher Education and another in the New York Times.) Anyone expecting to get the inside scoop on “Conservatism in the Trump Era,” as the event was entitled, would have gone away unfulfilled. Trumpism is at this point as hard to pin down as its unpredictable namesake.

There were two panels. The first was a general discussion of the topic, the second ostensibly devoted to U.S. foreign and defense policy. The participants—who included institute mainstays Charles Kesler, editor of the Claremont Review of Books, frequent CRB contributor Mark Helprin, and CRB publisher Michael Pack— seemed uncomfortable. How many times has an ambivalence about Trump been noticed in the supporters of Trump? Again and again and again it has popped up, not just from public intellectuals who voted for him, but in man-on-the-street interviews with Trump voters that appeared in the media during the campaign.

Here it was again.

The panelists were putting on a brave face; at least that’s how they struck me. Mark Bauerlein of Emory University talked Trump at a certain remove—how satisfying that he should violate the Left’s taboos, how flagrant the hostility on campuses like Emory’s toward any students who dared to say they would vote for Donald Trump. Kesler’s observations about the new President were strained through a clever, elaborate, and almost convincing filter of the history of the Republican Party. He argued that Trump’s economic nationalism could be seen as a throwback to pre-New Deal Republicanism, a major plank of which was the protective tariff.

Kesler made but a glancing reference to immigration. Political scientist Michael Uhlmann alluded briefly to this topic, too, in what I thought an excellent presentation. “It’s the metaphoric wall that matters; I’d just as soon keep it that way,” said Uhlmann. A pro-Trump friend of mine who was in attendance—and it seemed much of the audience was Republican and pro-Trump—said he heard a lot of grumbling. His fellow Trump supporters were dissatisfied with the discussion, and so was he. Why, they wanted to know, did the panelists skirt the issue of immigration? This, in their estimation, was a “Weekly Standard panel”—almost as bad as using the “n” word (neocon). There was irony here. A Weekly Standard writer was on the panel, but what Christopher Caldwell had to say came across as positively pro-Trump if you compared it to what Uhlmann, Pack, and Helprin had to say.

Caldwell, brilliant and informative on a regular basis (most recently here), decided to be cryptic on this occasion. (He had some funny one-liners, though.) I interpreted his remarks as putting him on the side of the coal-mining and other working class “deplorables” who voted for Trump, and against the writers on the Right who dumped on Trump during the campaign, especially Kevin Williamson of National Review, who admonished the jobless in the Rust Belt to take some responsibility for their lives by picking themselves up and seeking brighter opportunities in less depressed parts of the country.

The “foreign policy” panel that came next was downright strange. Claremont senior fellow Angelo Codevilla led it off. Mostly he spoke of ordinary citizens’ getting fed up with being pushed around by America’s ruling class, and about the Left’s militancy in resisting the new administration. Codevilla’s theme was statecraft at a time of national disunity, and it led him to touch on sanctuary cities, President Eisenhower’s federalizing of the Arkansas National Guard to enforce the desegregation of Central High School in Little Rock in 1957, and school prayer in North Dakota. Only at the tail end of his remarks did he address foreign policy and national security.

Helprin, for his part, talked a lot about the meteoric rise of China as a military power but very little about Donald Trump.

The estimable Walter Russell Mead seemed in a balky mood as well, offering a precis of the “blue social model” insights he has developed in the pages of the American Interest, which all well-informed citizens need to know about, but which don’t have much to do with Trump’s politics. Mead also spoke of the need for spiritual renewal in our country—related to U.S. foreign and defense policy, perhaps, but indirectly.

The moderator, Rebeccah Heinrichs of the Hudson Institute, eventually tried to coax Mead into saying something about President Trump and Russia. At which point Mead observed that the Trump agenda, if actually carried out, would not be good for Vladimir Putin. Intensifying fracking would keep U.S. oil production up and world oil prices down, which would hurt the Russian economy, and if in addition Trump were to restore the strength of the U.S. military, “it’s a bullet with Putin’s name on it”—he simply would not be able to “remain the strutting figure on the world stage” that the weak Obama foreign policy has enabled him to be.

Mead and others lamented the loss of U.S. military capability and diplomatic clout under President Obama and welcomed Trump’s promise to restore both. Where the panelists disagreed, or at least where they talked past each other, was on the question of intervention.

Asia Times columnist David Goldman, holding the floor right after Codevilla, was the one who most squarely faced the question of a conservative foreign policy now that Trump was in the White House. “The Bush freedom agenda,” he said, “has been largely repudiated by the electorate, and in its absence there isn’t anything resembling a consensus as to what a conservative foreign policy would be.” His suggestion: Bring back part of President Reagan’s program, namely Reagan’s heavy investment in U.S. military research and development. America needs technological advances, said Goldman, to counter those of China and Russia.

On the other hand, with the Middle East in flames, Goldman ruminated on the possibility of the Americans’ negotiating with the Russians to try to put out the fire. He said:

Angelo Codevilla and I were discussing this before the meeting—that we might sit down with the Russians and say this thing isn’t good for any of us. Let the big boys get together and draw a map of the region, put in leaders whom we all can agree on, the Shiites there, the Sunnis there, the Kurds somewhere else, and we’re simply going to enforce the borders, and we’re not going to let non-state actors get out of control.

How much U.S. force would this require? Goldman didn’t delve into details.[1] His proposal didn’t raise any questions from the largely Trump-supporting audience. This I found puzzling, assuming as I did that Trump’s appeal for them lay in his Caspar Weinberger-esque combination of a belief in muscular armed forces coupled with a disinclination to use them.

Codevilla came back into the conversation later but did not pick up on the Goldman proposal, either. What he said was: “Washington is full of chicken hawks.” Who did he mean? Those who “chose to send draftees to risk their lives” without considering the cost in blood and treasure. Typifying this attitude, he said, was Eliot Cohen, the military historian and Bush 43 State Department veteran. “Eliot Cohen, and lots of others, enjoy playing world chess with hired hands,” according to Codevilla.

It was an odd moment, not least because Eliot Cohen’s son served in Iraq. Perhaps when all is in flux, the less said the better.

[1] Goldman spoke to this in his Asia Times column of August 22, 2016, where he expressed support for “just what Trump has proposed, an ‘extreme’ and ‘vicious’ campaign against the terrorist gang. The United States and whoever wants to join it (perhaps the French Foreign Legion?) should exterminate ISIS. That requires a combination of ruthless employment of air power with less squeamishness about collateral damage as well as a division or two on the ground. America doesn’t necessarily need to deploy the kind of soldier who joined the National Guard to get a subsidy for college tuition. As Erik Prince has suggested, private contractors could do the job cheaper, along with judicious use of special forces.”

This Is Still (Mostly) Your Father’s GOP

To Secure the Blessings of Liberty: Sharing Stories of American Civic Purposes

One the ways Americans can unite is over our shared purposes, but for this to work, we need a renewed attention to the story of American liberty.