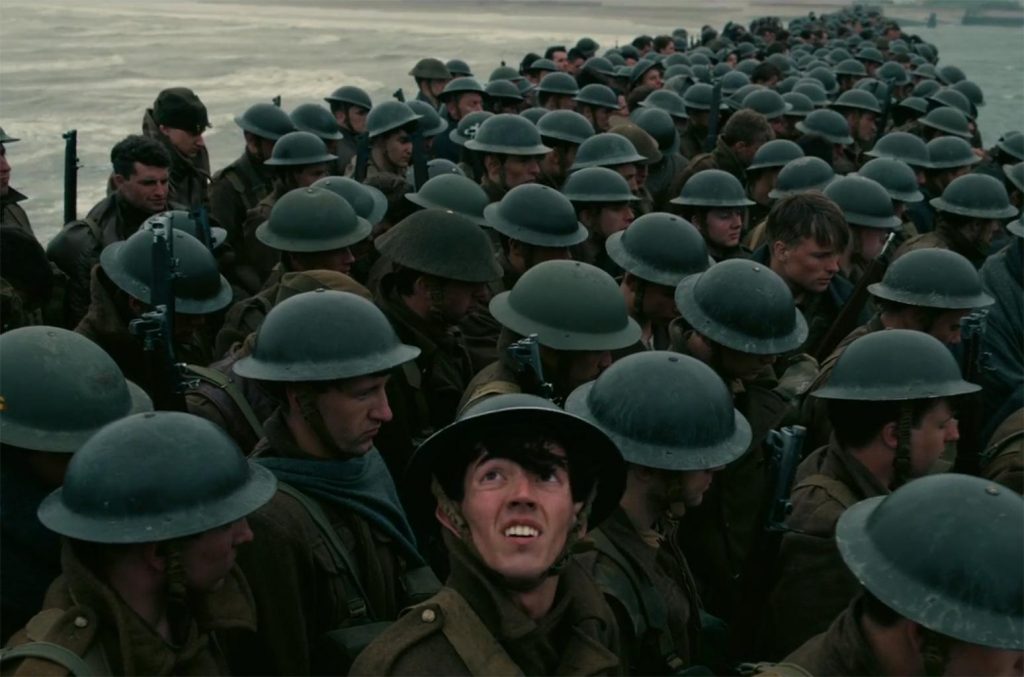 Some of the most amazing things about Dunkirk, the lauded new movie written and directed by Christopher Nolan, are the things that are not in the film. Dunkirk dramatizes what was considered at the time a massive failure — the 1940 evacuation of 300,000 British troops from France at the beginning of World War II. In Dunkirk the film there’s no cute, sarcastic hero like in American action films (Christopher Nolan is British). There are no lingering torture scenes, a specialty of American sadist Quentin Tarantino. Indeed, the faces of the villains in Dunkirk — the German forces — are never seen. There are no ridiculous stunts that defy physics and common sense. There’s very little Computer Graphics Images, the gleaming special effects technology that makes so many modern films look like plastic. There’s no happy ending, but there is an astonishing, tear-inducing climax that is one of the best defenses of the West and freedom ever committed to film. These omissions, along with rich cinematography, the brilliant use of music, terrific actors and a general tone of understatement combine to make Dunkirk—a story of survival and stirring patriotism in the face of evil—a truly great film.

Dunkirk is told in three storylines. First is “The Mole,” which follows the efforts of troops to escape their position using abandoned boats docked off the shore of Dunkirk, France. The central figure in this section is Tommy (Fionn Whitehead), who is introduced in the first astounding moments of the film. Six young British soldiers walk through the deserted streets of a French town. Suddenly leaflets fall from the sky, announcing that they are surrounded and will not escape. There is little music; as Nolan has proven in other films, sometimes the lack of a soundtrack can give action sequences tremendous immediacy and power. One soldier tries to get water from a hose, another searches through a window for a smoke. Then shots ring out and the soldiers start running. Five are mowed down. Veterans of Saving Private Ryan might start hunkering down here for what will no doubt be a long, ear splitting fire fight. But then, just as quickly as the shots rang out, the tone shifts. Tommy comes to a bunker where he is rescued by French soldiers. He then makes his way to the beach, where it is revealed that hundreds of thousands of British troops have been boxed in by the German army. Tommy and his fellow soldiers are just twenty-six miles from home and are sitting ducks for Hitler. This isn’t a film about victory, but defeat. Desperate, Tommy and others will try to escape via abandoned offshore boats.

The second story in Dunkirk, “The Sea,” centers on the civilian rescue at Dunkirk. When official military vessels were not ready or available, civilian fishing boats and seaman’s yachts commanded by volunteers headed across the English Channel to transport survivors to troop ships, and in some cases back to the United Kingdom. The main character in “The Sea” is a middle-aged civilian named Dawson (Mark Rylance) with a wooden motor yacht called the Moonstone who sets out for Dunkirk with his son Peter (Tom Glynn-Carney) and a young friend named George (Barry Keoghan). Urged to return home by a shell-shocked soldier (Cillian Murphy) whom they find on the stern of a torpedoed ship, Dawson says simply, “There won’t be any home if we allow a slaughter across the Channel.”

The third, most visually stunning story in Dunkirk is “The Air.” An R.A.F. fighter pilot named Farrier (Tom Hardy) comes to Dunkirk to provide much-needed cover for the young soldiers below and battle the German Luftwaffe. In films like Memento and Inception, director Nolan became known to play with time, and in Dunkirk the three narratives, while given equal screen time, actually represent different lengths of actual time — “The Mole” a week, “The Sea” a day, and “The Air” an hour. In the end, all stories converge to climax.

And what a climax it is. As the civilian boats come to the rescue and Timmy and the other troops return home to pints and crumpets, Farrier the fighter pilot, who is running out of gas and can’t make it back to England, is forced to land on the beach at Dunkirk. Nolan makes the inspired decision to deliver Churchill’s famous “We Shall Fight on the Beaches” speech not as a voice-over, but from a common soldier in a train, who reads it aloud from a newspaper. In a stirring, chill-inducing sequence, we hear Churchill’s words

while we see Farrier land and torch his Spitfire to prevent the Germans from accessing it. Farrier stands in front of the burning vessel, proudly defiant as shadowy shapes, the Germans, close in. It’s an image not just of British bravery but of archetypal defiance of evil.

There is not a lot of dialogue in Dunkirk, and between the noise of battle, the chaos of the escape and the music, much of what the actors say indecipherable. This is a common problem with Nolan, whose Batman film The Dark Knight Rises had to be re-edited after early complaints from critics, who could not understand what actors were saying. The Dunkirk score by Hans Zimmer is suitably powerful, with strings providing a steady heartbeat as suspense builds, but perhaps it could have been lowered in the mix at times when characters are speaking. The actors in Dunkirk are uniformly excellent. Yet the film may ultimately belong to Nolan and the Dutch-Swedish cinematographer Hoyte van Hoytema (Interstellar, Spectre). Hoytema has given Dunkirk a gorgeous look, with stunning wide angle shoots of the beach and deep color saturation. The dogfighting footage is particularly spectacular, and would have made a fine film just by itself.

Why is it that the English-speaking peoples historically combined a deep love of liberty with a passionate devotion to their political duties? Can it last?

A willingness to bear witness to this dramatized suffering is almost an act of piety—as free men and women, to be shown how our freedom is defended.