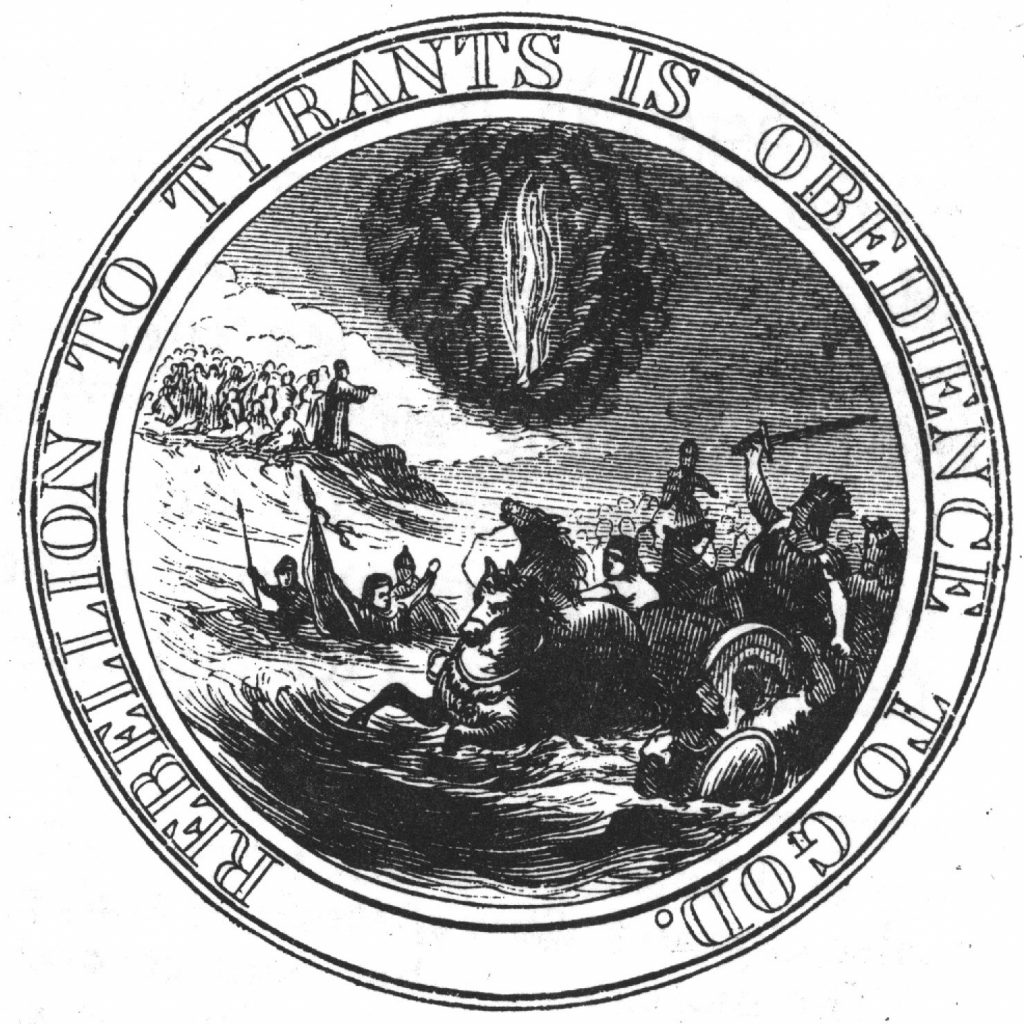 Benjamin Franklin’s proposed this depiction for the national seal in 1776.

Scholars regularly assert that America’s Founders were deists who desired the strict separation of church and state.

Frank Lambert, for example, writes that “the significance of the Enlightenment and Deism for the birth of the American republic, and especially the relationship between church and state within it, can hardly be overstated.” Similarly, his fellow historian Richard Hughes claims “most of the American founders embraced some form of Deism, not historically orthodox Christianity.” Although many more examples could be given, I’ll close by quoting law professor Geoffrey R. Stone, who contends that “deistic beliefs played a central role in the framing of the American republic . . . . [The] founding generation viewed religion, and particularly religion’s relation to government, through an Enlightenment lens that was deeply skeptical of orthodox Christianity.”[1]

These claims are strong and sweeping, but there is virtually no evidence to support them. Each of these authors, like other writers who make assertions of this nature, consider the views of only a handful of Founders—usually some combination of Benjamin Franklin, George Washington, John Adams, Thomas Jefferson, James Madison, Alexander Hamilton, and Thomas Paine, plus one or two others. All were great men, but their religious views are not representative of the Founding generation. And in many cases, authors hoping to find a rational and secular Founding distort their religious convictions.

For an undistorted view of Washington, for example, see the fourth post in this Law and Liberty series on participants in the Founding-era debates over religious liberty and church-state relations. There’s little reason to believe that he, or that Madison or Hamilton, rejected a single important tenet of orthodox Christianity, much less that any of these men embraced deism. What about Franklin, then? This fifth instalment examines the views of the man who is considered to be one of the most skeptical Founders.

Benjamin Franklin, born into a Calvinist family in Boston in 1706, rejected his parents’ beliefs at an early age. Indeed, in his first British sojourn he seems to have abandoned Christianity altogether, as evidenced by his pamphlet A Dissertation on Liberty and Necessity (1725). In it, he argued, among other things, that “vice and virtue were empty distinctions.” Yet almost immediately he regretted penning the work, and he later called it an “erratum.”

Franklin noted in his autobiography that as a young man he became a “thorough deist.” But after he penned these words, he recorded his regret that the arguments he had made in favor of deism “perverted” some of his friends. He then reflected that “the kind hand of Providence, or some guardian angel, or accidental favorable circumstances and situations, or all together, preserved me thro’ this dangerous time of youth.”

Alan Wolfe has written that deists believe that “God set the world in motion and then abstained from human affairs.”[2] According to this common definition, Franklin would seem not to be a deist, as he recognized the possibility that the “kind hand of Providence” protected him. If this were his only reference to the Almighty’s intervention in human affairs, we might simply ignore it. But as Thomas S. Kidd demonstrates in Benjamin Franklin: The Religious Life of a Founding Father, Franklin never quite “escaped” his parents’ belief that “God governs the affairs of men.”[3]

Franklin’s most famous reference to God’s providence occurred at the Constitutional Convention, when he attempted to convince his colleagues that they should invite ministers to open the proceedings in prayer. Franklin was the oldest member of that body, so it is noteworthy that he observed that

the longer I live, the more convincing proofs I see of this truth—that God governs the affairs of men. And if a sparrow cannot fall to the ground without his notice, is it probably that an empire can rise without his notice. We have been assured, Sir, in the sacred writings, that “except the Lord build the House, they labour in vain that build it.” (Emphasis in original.)

It is always possible that Franklin was not being serious when he referred to God’s providence, but he did so regularly, in settings both public and private. At a minimum, there are very good reasons for concluding that he was not a deist—at least as the term is usually defined. Of course this does not mean he was an orthodox Christian. Again, quoting from his famous autobiography, he delineated his core religious convictions this way:

That there is one God, who made all things.

That He governs the world by his providence.

That He ought to be worshipped by adoration, prayer, and thanksgiving.

But that the most acceptable service of God is doing good to man.

That the soul is immortal.

And that God will certainly reward virtue and punish vice, either here or hereafter.

Noticeably missing from this list is any mention of distinctive Christian doctrines concerning, for example, the trinity, incarnation, or atonement. After his youthful dalliance with radical religious ideas, Franklin seems to have adopted a “reasonable” version of Christianity wherein the Creator rewards virtue, punishes vice, and intervenes in human affairs. He questioned or rejected parts of the Bible that he found unreasonable, but he knew it well and used it to great effect in his polemical writings.

Here are two examples. When, in 1747, Franklin launched a campaign to encourage Pennsylvania’s leaders to fund the militia, he reminded his readers that God provided us with the Bible “for our reproof, instruction and warning” and that His word clearly requires rulers to defend their subjects—by military force, if necessary. Similarly, when he wrote an appeal to fund a hospital in 1751, he could think of no better place to start than Jesus’ admonition in Matthew 25:36 that “I was sick and ye visited me.”

Franklin was not an orthodox Christian, but those who did not know him well could be excused if they missed this fact. After 1730, he kept his skeptical views from the general public, rented a pew at Philadelphia’s Christ Church, utilized Scripture in his public rhetoric, and was friends with the evangelist George Whitefield. These actions may tell us more about American political culture in the 18th century than about Franklin’s inner convictions, and they suggest that it is a mistake to generalize from his private views to those of the Founding.

What about Franklin’s views on religious liberty and church state relations? Like virtually all of the Founders, he embraced a robust understanding of religious liberty. Unlike some of them, he believed religious freedom precluded religious tests for public office. And he objected to religious establishments because he thought they corrupted the church.

But he did not advocate a strict separation between church and state. For instance, in 1747, he drafted a fast day proclamation for the Pennsylvania governors’ council. Later, when he was serving in the Second Continental Congress, he proposed that the nation adopt as its seal the image of “Moses standing on the shore, and extending his hand over the sea, thereby causing the same to overwhelm Pharaoh.” And he suggested that the country’s motto be “Rebellion to Tyrants is Obedience to God.”

Contrary to some scholars, it is actually quite easy to overstate the “significance of the Enlightenment and Deism for the birth of the American republic, and especially the relationship between church and state within it.” This is true even for the handful of elite Founders regularly referenced by such writers, and if one expands the constellation of Founders to include men and women such as Roger Sherman, Oliver Ellsworth, Charles Carroll, John Jay, Patrick Henry, Abigail Adams, Mercy Otis Warren, Elias Boudinot, John Dickinson, William Paterson, and Samuel Adams, it becomes impossible to maintain this fiction.

[1] Frank Lambert, The Founding Fathers and the Place of Religion in America (Princeton University Press, 2003), 161; Richard Hughes, Myths America Lives By (University of Illinois Press, 2003), 50; and Geoffrey R. Stone, “The World of the Framers: A Christian Nation?” University of California Law Review 56 (October 2008), 7-8. I provide more examples of such claims, and examine the evidence for them in greater detail, in Mark David Hall, “Were Any of the Founders Deists?” in The Wiley Blackwell Companion to Religion and Politics in the U.S., edited by Barbara A. McGraw (Wiley Blackwell Publishing, 2016), 51-63.

[2] Alan Wolfe, review of The Faiths of the Founding Fathers by David L. Holmes, New York Times Review of Books, May 7, 2006.

[3] My review of Kidd’s book on Franklin, from which several paragraphs of this post were drawn, will be published in Education and Culture: A Critical Review.

Churches’ opposition to state-ordered closings seems to turn, not on the particulars of worship itself, but on attitudes about hierarchy and government.