A few years ago Eugene Steuerle (Brookings) and his colleague Tim Roeper developed a “fiscal democracy index.” It measures the extent to which revenues are already claimed by permanent programs—the big entitlement programs, and interest payments on the debt. The remaining “discretionary” portion has to pay for the entire government’s operations, from defense to roads to education to the DoJ. The trajectory over the past half-century looks like this: 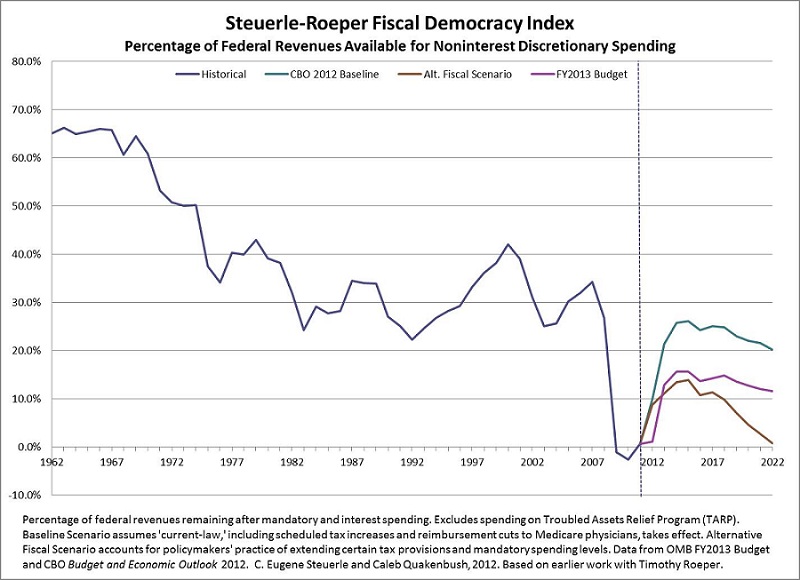 Note how in this as in many other respects, the Clinton years look pretty darn good. And note how the index turned negative in 2009. The picture going forward doesn’t look much brighter. (The CBO baseline is pure fantasy.)

Does the problem enter into this year’s election? Sort of: three of the remaining candidates are burbling about expanding entitlement programs. What’s the weather like, on their respective planets?

I’m inclined to think that this is a constitutional as well as a fiscal problem. The Constitution doesn’t specifically command Congress to exercise its power of the purse on a regular basis; but it plainly presumes it. The Steuerle index makes you wonder why we still have a Congress. Moreover, the decline of discretionary spending is conducive to deeply troublesome institutional practices—the collapse of the regular budget order, for example; and the increased resort to agency self-finance. (Chris DeMuth and I have described the tendency here.) Debt-driven government is executive government, and vice versa. But maybe that’s the government we deserve.

Fasten your seatbealts. It’s going to be a bumpy ride.

The Right to Privacy Is a Threat to Liberty

The Constitutional Propriety of Impeaching the President

On the 150th anniversary of Andrew Johnson's trial in the Senate, we should remember that impeaching the president isn't only about specific crimes.

The Regulatory State on Autopilot: A Response to Comments

How the Subservient Branch Declares War