What is wrong with America? It does not seem to work anymore. Low employment, static wages, burdened business, persistent poverty, destructive lifestyles, exploding debt, threatened entitlement bankruptcy, and stagnation generally seem to be its future, following the path to decline set by Old Europe the century before.

It may seem peculiar that a peace treaty signed in 1648 might hold the answer. 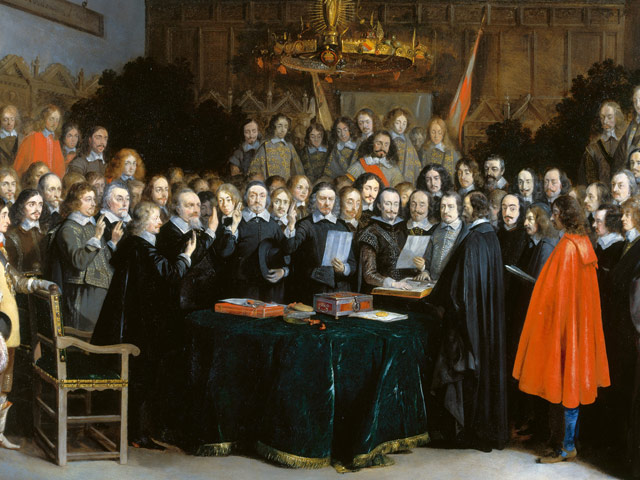 The Ratification of the Treaty at Münster in Westphalia

It all starts from the Treaty of Westphalia’s legitimization of the divine right monarchs’ forced centralization of dispersed principalities, towns, and interests into their powerful new nation-states. Church and state were unified dramatically as these kings—whose rule was allegedly God-chosen— even specified their subjects’ religions, which according to modern progressive history somehow led Europe and the whole world to modern order, rationalism, enlightenment, secularism, tolerance, freedom and peace.

The prevalence of this belief that the state could determine everyone’s fundamental value preferences yet also promote freedom and tolerance requires explanation. It follows Rousseau in assuming that the state can fashion neutral morals to promote order and justice, at least after rationalizing its established religion. Rousseau himself presented as his solution a more heroic code of Christian morality without Christianity’s God. Not being very interested in moral codes, the prevailing monarchs and parliaments pretty much accepted the existing religions for their moral order. But something had to redirect emotional attachment to the state. Monarchy proved inadequate so every European state adopted some form of nationalism, perfected by Napoleon.

As mention of the Corsican brigadier general implies, peace was not the prevailing consequence. From the Treaty’s very ratification, the following two centuries were littered with dynastic wars to decide who would exercise the new centralized power right up to 1815 and the famous defeat at Waterloo. The victor of that protracted contest was Prussia, whose power consolidated Germany, eclipsed France, and fomented the First and Second World Wars.

That list of absorbed minorities is not all-inclusive but it does betray the world’s current problem. Every minority on the list is restive today, many actively pursuing independence, and some even at substantial economic cost. Centralizing forces notwithstanding, the local identities have survived. It is not so much that localism has strengthened, but that the nation-states carved by political power have lost their mystique and peoples are turning to any alternative. At the same time, religious identities have been weakened; but even these provided some refuge, especially outside the West, as the empowered bureaucratic states forced more and more standardized rules treating their different peoples equally in all areas of social life. As Aristotle warned long ago, treating different things equally is unjust and causes resentment. Machiavelli taught the wise ruler that the solution was not equality, except in obeying the law, but being adept at finding unique solutions for different situations.

While the United States has been multi-ethnic and multi-denominational from colonial times and the perceptive Alexis de Tocqueville found it more decentralized than medieval Europe, he found it had a sense of nation even so. To be sure, it was a strange sort of nationalism—the result of the fact that the central government was mostly an ideal, its limited scope demanding very little and thus generating little resentment. As the equalizing ethos in the United States became nationalized, however, its union became more demanding, cumulating in a Civil War costing near a million lives to form a deeper cultural nationalism. World War II rallied the nation and turned it into the dominant world power, consolidating the transformation.

Prosperity and a dominant progressive spirit moved national government deeply into setting national moral codes on welfare, race, sex, food, drugs, health, retirement, and most commercial activities. Increasingly nationalized politics spawned two ideological parties for or against such progress, undermining national consensus. The Protestant mainline denominations that were the de facto cultural and moral fibers of its nationalism then lost their sense of moral mission, assimilating into a new consensus on a “social gospel without the gospel,” as Joseph Bottum describes it in his book An Anxious Age. The new gospel was rooted in a sense of moral wrath against bigotry, authority, and parochial thinking generally as the new moral evils, and a new mission of enlightening and politically reforming those clinging to the old traditions, including nationalism.

For a while after World War II, foreign policy still provided some last strong sense of nationalism for Americans.When the Soviet Union declared that its purpose was to make the world communist and seemed to have the weaponry to do it, it was generally opposed by liberals and conservatives alike. But when the old enemy fell and a new one attacked on 9/11 the enemy became an amorphous “terrorism” and the goal expanded to turning the world to freedom and democracy. Expensive, prolonged and brutal wars in Afghanistan, Iraq, and elsewhere proved divisive rather unifying.

Nationalism has been the glue that has held the post-Westphalian world together. But its power is waning. This is true even in the United States, whose mainstream Protestantism, the adhering element, is spent. As Bottum concluded, the alternatives are too weak to replace it. The result is progressives and conservatives confronting each other across a divided America, split into Red and Blue state enclaves no nationalism can bring together. Congress is stalemated by this division and President Obama, as in a Third World nation, rules by executive decree.

The United States worked when it was free and decentralized, when the 10th Amendment narrowed the scope of nationalism. Its European colonists had escaped the Old World before its nationalist ideological centralization and, in their innocence, were able to create the economic and socially free wonder of the world. But progressivism opened Pandora’s box and substituted bureaucracy for America’s free markets, vital local communities, and voluntary associations, producing ossified government and the present discontent. To break free from the dependency of the centralized welfare state and reestablish self-government and voluntary community in its place, the earlier vital federalism would need to be recreated. Welfare reform should be the model. It will be a long and difficult journey back; but it is the only way.

Centralization can force a single nationalism for a while but it has its limits. The power of the administrative state debilitates the energy and creativity required to succeed. Ask Old Europe. Ask Gorbechev. Ask Ukraine’s Yanukovych. Someday, ask Putin or even, perhaps, Obama.

Property and the Pursuit of Virtue

While there are many strong pedagogical reasons for homeschooling, protecting children from the ideology of the system is, itself, a good reason.