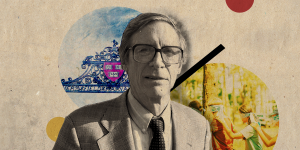 On the Legacy of A Theory of Justice

A Theory of Justice (1971)was one of the most influential works of twentieth-century political theory, and we have now arrived at its 50th anniversary. How should we think about its legacy? Most Law & Liberty readers are familiar with Theory’s basic arguments. But the task of assessing its legacy is complicated by the fact that … Continue reading On the Legacy of A Theory of Justice

Copy and paste this URL into your WordPress site to embed

Copy and paste this code into your site to embed