Our Ruling class is at odds about how to respond to the Middle East warring factions’ threats and blandishments because it has forgotten US foreign policy’s basic principle – we are on America’s side – and never learned what justifies departure from that principle, namely war. 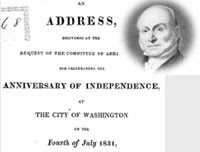 John Quincy Adams best stated the principle. America, he said, “is the well-wisher to the freedom and independence of all. She is the champion and vindicator only of her own. She will recommend the general cause, by the countenance of her voice, and the benignant sympathy of her example. She well knows that by once enlisting under other banners than her own, were they even the banners of foreign independence, she would involve herself, beyond the power of extrication, in all the wars of interest and intrigue, of individual avarice, envy, and ambition, which assume the colors and usurp the standard of freedom.” When foreigners war amongst themselves, we Americans must take neither side. If and when we do, we make their wars our own. Then we must deal with the consequences according to the logic of war.

A half-century of Cold War obscured that principle. The Soviet Union waged war on us among all the world’s peoples. Because each population enslaved by Communism was thereby enlisted in war against America, the world’s “wars of interest and intrigue, of individual avarice, envy, and ambition which usurp the standard of freedom” became part of our own war for survival. Our foreign policy Establishment had to choose sides, and did so with disparate degrees of wisdom.

Unfortunately, the habit of involvement in others’ quarrels transcended the Cold War. Patronizing Egypt’s military regime and defending the Saudi monarchy, necessary as they were during the Cold War, just as surely fostered the rise of the Egyptians Ayman al Zawahiri and Mohammed Atta as well as of the Saudi Osama bin Laden. The strength and anti Western orientation of the Muslim Brotherhood and of al Qaeda can be understood only in the context of excessive, unwise US involvement in the Arab world’s affairs.

Hence today’s intra-US quarrels about which side to take in Egypt’s civil war are all too understandable. Surely President Obama erred even more than had George W. Bush in encouraging, even demanding that Egypt be ruled pursuant to elections, since such elections were sure to empower the Muslim Brotherhood. Even more surely, The Obamites (and the Bushies to a lesser extent) based US foreign policy on willful blindness of the Brotherhood’s totalitarian, anti-American nature. Our ruling class’ silence as the Brotherhood has instigated the murder of Christians and the destruction of churches further underlines its bankruptcy. Egypt’s armed forces, by crushing the Brotherhood, have spared the consequences of our bipartisan ruling class’ promotion of a movement that was in the process of doing to the Arab world the things that the Nazi movement had done to and with Europe’s German population. Hence applause for Egypt’s bloody armed forces seems as reasonable as it would have been in 1933 had Germany’s generals aborted Hitler.

On the other hand, supporting Egypt’s military as it kills by the hundreds and imprisons by the myriads, as it re-establishes a corrupt regime that, along with its Saudi counterpart, incubated many of the world’s troubles, is a path without good long term prospects.

Reference to principle offers such prospects. Yes, the Arab world’s problems are its own, and the sooner and more thoroughly we leave it to deal with those problems on its own terms the better for all. But yes too, having involved ourselves in its wars albeit mistakenly, we have an indelible short and perhaps medium-term interest in who prevails.

American principle means maintaining practical relations with Egypt’s military, recognizing the regime de facto according to America’s historic tradition. Current law’s prohibition of aid to military coups ignorantly ignores differences among them of character and of significance. Our principle means as well that, as practicable, our relations with Egypt and such should return to a traditional arms-length basis. In principle, no aid.

“As practicable” means taking account of the reality of the war we are in. That reality includes the difference between America’s interest in that war, and the interests of the regimes directly involved.

There is reasonable basis for hope that important elements of Arab society may have learned from their brush with Islamist totalitarianism. Thus for example, as the Egyptian military was signaling the depth of its banishment of the Brotherhood, Saudi prince Alwaleed bin Talal fired a charismatic preacher from his TV station because of his links to that organization. We can hope that the Arab world’s leaders have seen the futility of their double game of indulging Islamism while deflecting its violence Westward. Perhaps henceforward they will hold themselves accountable for the violence that issues from their borders.

Regardless of that, however, the bedrock principle of American foreign policy, namely that we are on our side, means that we must leave foreign regimes to deal with what happens within their borders and hold them accountable for what issues from them

A Bridge Too Far: Reverse Incorporation

Patriotism and Friendship in the Cold War

In The Courier , two very different men become friends because they aim to save civilization and embody it.

The Successes and Failure of John Quincy Adams