So we need a theory to justify the practices of our constitutional order. We can start with the Declaration of Independence and move forward.

To be true to the spirit of the Declaration means, from my perspective, not that we are bound to the most radical reading of its most abstract truth, but that we ought to recover the spirited aspiration to self-government that gave the American Revolution its force and its justification. Rather than look to an unelected judiciary for the formulation of our ideals—or to the liberal philosophers who want to rule through them—we should neither shy away from free debate on important social questions nor demand that every consensus work out its derivation from first things in order to count.[ii]

The theory required is one that mediates the compromises that allowed a regime of ordered liberty to emerge that was superior to the competing notions that were actually compromised. 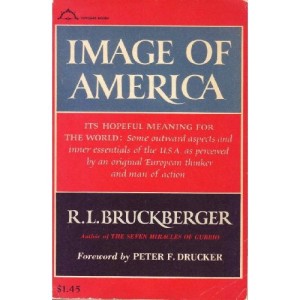 Unsurprisingly, it took a French Catholic priest, Father Raymond Bruckberger, chaplain to the French Resistance no less, to reveal America to itself, or to remind America that its legacy begins with men locked in dry political argument. Bruckberger’s book, Image of America, published in America in 1964, beautifully accounts for our Declaration of Independence and its mixture of natural theology in its second paragraph with the providential God featured in the last section of the Declaration. Bruckberger observes that the Continental Congress, while not rejecting Jefferson’s deistic formulation in the second paragraph, inserts two descriptions of God as a Creator and Judge, as a personal God, into the text. This result recognized “that Congress and Jefferson had different concepts of God” and that they held to “two profoundly different philosophies.” Jefferson and the reigning philosophy of the day had its God, “Nature’s God” or the impersonal, past-tense God, more of a what than a who. But the happy reconciliation is the acceptance of Jefferson’s opening formulation of “Nature’s God” and the insertion in the revised draft of references to the personal God, made by Calvinist members of the Congress who were largely opposed to Jefferson’s philosophy.

Their appeal “to the Supreme Judge of the world for the rectitude of our intentions” and to find support “of this Declaration” in “a firm reliance on divine Providence” balanced Jefferson’s impersonal God with a deity more consonant with the wider citizenry. Here, Bruckberger notes “The greatest luck of all for the Declaration was precisely the divergence and compromise between the Puritan tradition and what Jefferson wrote.”[iii] The Declaration cast in a strictly Puritan mold would have failed to avoid the hints of theocracy foreign to the best of the Western political tradition. Alternatively, “Had it been written from the standpoint of the lax philosophy of the day it would have been a-religious, if not actually offensive to Christians.”[iv]

The truth rests in the fortunate compromise that left America with a document fully open to rationalist philosophy or the God of the philosophers and to religious believers or the God of the Bible. Reason and revelation are not placed at odds and are instead mutual participants in a constitutional tradition reconciling 18th century philosophy and Judeo-Christian revelation. We have as it were a kind of accidental Thomism. As such, the Declaration selects and incorporates a rich inheritance, one that defends liberty and human dignity from multiple sources, permitting future generations ample foundation for developing their constitutional tradition as circumstances and events reveal opportunities for the only progress that is finally sensible, that within a constituted tradition. In this manner, the Declaration rises above the men who signed it and their component beliefs. Thus does it provide a “philosophy that most manifests the equality of all men in their natural and supernatural dignity.”[v]

This first great legislative compromise is part of the beginning of our fundamental law as contained in the Declaration. Importantly, it affirms of each citizen that he is higher than the regime itself, his being is only partly political, and, therefore cannot be created, defined, or exhausted by state power. The state is limited by and points toward the higher aspirations of man’s nature, aspirations that lead man to desire to know the truth about himself. Moreover, when read holistically, the Declaration leads us to the only sane politics there really is because it states that there are truths, we hold them, and we do so because they are self-evident. These truths tell us that God is sovereign over nations and individuals.[vi] Their self-evident nature might be understood through abstract reason, but another method is through man’s desire to exercise a personal liberty that is self-government under God. The truth affirmed it that man’s inclinations and desires point beyond the political community, limiting that community while giving it a firm foundation in human dignity and its desire to know the truth. The social nature of personhood, the subjective awareness that man has of his dignity and his freedom, and that these are not given by the state best explains man’s existence and is the purpose served by our Declaration. We understand the Declaration best when we understand that it is pointing to purposes higher than itself that citizens participate in and which gives certainty to and places limits on state power.

The American constitution, considered in its written and unwritten aspects, exists under the sovereignty of God, the source of the dignity held by its citizens and their attendant political liberties whose “divine Providence” is the “support of this Declaration.” Accordingly, America rejects the political atheism of the French Revolution where the state was given the fullness of political rule. Political sovereignty in the French conception was merely transferred to the people from the King, or effectually from the King to the democratic nation-state. This was revolutionary, but it resulted in the people exercising “divine-right” to rule and holding power equal to if not superior to that of the murdered monarch. Between the natural anarchy that fits a situation where total power is given to the people with limits existing merely in the will of the people, and the political despotism that consequently resulted from it, the French Revolution could find no decent compromise.  What, in the final analysis, was higher than the reason of each autonomous individual according to the French revolutionaries? Reason may have justified individual liberty, but could provide no content or any principles of self-limitation to that liberty.[vii] So the implicit truth of our American fundamental law is that limited government requires that “A free people have to be not only less but more–as social beings under God–than political beings. The particular human being is not created by nor is he essentially a creature of government.”[viii]

[i] James R. Stoner, Jr., “Is There a Political Philosophy in the Declaration of Independence,” The Intercollegiate Review, Volume 40, Number 2, 2005.

Crisis of the Calhoun United

To Secure the Blessings of Liberty: Sharing Stories of American Civic Purposes

One the ways Americans can unite is over our shared purposes, but for this to work, we need a renewed attention to the story of American liberty.