Many are calling for a special prosecutor to take over the IRS scandal and with pinpoint legal accuracy get to the bottom of what happened. I suppose some now want a Kenneth Starr figure to appear and ram the Obama administration with subpoenas, depositions, grand juries. Now that there is something at stake, unlike White House interns, we actually do want the full truth, and, we suspect, Congress might not be up to it.  However, Andy McCarthy refers us back to Scalia’s opinion in Morrison v. Olson where he reminded that investigations are an executive branch function and can never be separate from the attorney general and the president. In short, that barking dog’s leash can get yanked any number of ways.

McCarthy observes that what is needed is the full weight of congressional political might brought to bear on the executive branch in this matter, among others. Congress’ real weapons per the Constitution are political ones: impeachment and the purse. The independent prosecutor is a relatively late contrivance in our practice and obfuscates the real dynamics of our Constitution. So, we never get, under its tutelage, the sweet sounds of inter-branch competition for power, accountability, and public opinion! Separation of powers is a human system, after all, and it demands that you play politics, not press conferences and lawyerly administration. Can you hear God Bless America swelling in the background?

Switching fields a bit is Christopher DeMuth’s wonderful essay “Executive Government and Bankrupt Government,” which isn’t directly on point to the IRS’ scandals, but does speak to the emerged weakness of Congress relative to Executive branch power. Greve has also commented on the essay’s insight that regulation and debt-financed consumption are deeply related activities. Indeed, Demuth argues that “the modern executive state, and the practice of regular large budget deficits, emerged and grew simultaneously. It was in the early 1970s that Congress established new agencies, such as the Environmental Protection Agency, that exercised essentially legislative power over broad swaths of the economy. These agencies made law in executive rather than in legislative fashion . . .”

Likewise, DeMuth argues, the 1970s saw the rise and rise of federal deficits that doubled in the 1970s from the 1960s. Deficits obviously kept increasing in the ensuing decades. Here, DeMuth recalls that coterminous with this spending increase was a democratizing Congress. The chairmen decreased in stature and control of appropriations and “decision-making on spending and budgeting became something of a free-for-all.” Presidents’ spending desires could no longer be controlled. Centralization and hierarchy in Congress were a good thing, according to DeMuth, because they placed institutional pride and control in select representatives who would take on the president from a position of strength.

The effectual truth of DeMuth’s observation is that both regulation and borrowing allow Congress “to elide established norms of public finance and democratic accountability.” Regulation is a tax but its dead weight is borne by the private sector and passed along to an unknowing public in higher prices. Similarly, borrowing is also “a complementary means of taxation evasion: Elected officials provide constituents with higher levels of spending than of taxes to pay for the spending.” To relieve this burden, well, that’s what future generations are for, DeMuth reminds. 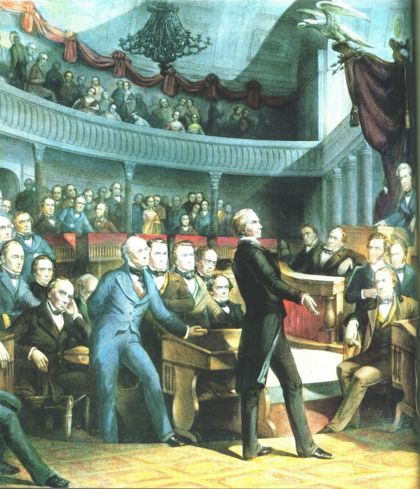 This post started with the IRS, independent prosecutors, and separation of powers talk, so what’s this about? DeMuth ends his paper with ideas for a renewed Congress. This is a dim subject, as he notes, Congress has seen it in its self interest to delegate its constitutional powers to the executive branch. Even the Court has been amazed at Congress’ willingness to delegate its taxing power to federal agencies, making the FCC, among others, self-funded profit centers. Hell, the FCC even shares its tax-farming proceeds with certain Internet customers, further cementing the practice.

The prospects for renewal come from a Congress and its members becoming tired with playing second-fiddle to a dominant executive branch, coupled with partisan interest of an abiding majority in profound conflict with the President, this could lead to the reassertion of institutional pride and power. The idea would be for Congress to recentralize, re-up the hierarchical form of committees and leaders it once had, and “play the separation-of-powers game effectively.”

This might be in the offing with our bevy of executive branch power abuses. Something I have noticed in the hearings thus far is the near ignorance of Congress about the practices of the IRS. So what, you might ask, what did you expect? The IRS officials who have testified keep reminding Congress of their complicated practices and techniques and the regs that govern them. They didn’t do anything wrong because that is their domain and you (congressman from Ohio) know little about it.

A renewed congressional constitutional practice would have to go, ultimately, beyond partisan interest and incorporate the minority. Members of both parties would need to agree to a course of action that limits the executive branch in all of its evasive capabilities that allow it to ignore or bypass the edicts of Congress. DeMuth speculates that this would probably involve the return of elitism in Congress. What we need are old bulls hierarchically holding their members in line and, in turn, the President on spending and regulation priorities. So, we get the return of history and the need to “reparochialize our politics.” Not a bad way to think about it.

Two Cheers for the Fiscal Cliff

The Attorney General and “The Resistance”

William Barr has refused to pull his punches when discussing what could be one of the greatest political scandals in US history.