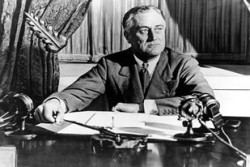 Watershed election presidents such as Abraham Lincoln and Franklin Roosevelt do not simply happen on election day. The significance of the election is played out in speeches that illuminate and in policy that transforms. Whether President Obama is a critical election president is yet to be determined, but his references to the Declaration and the Constitution in his second inaugural address make clear his ambition to change our understanding of who we are as a people.

Does it come as a surprise that we have been living under a new Constitution anyway, a “Second Bill of Rights” that has devoured the original document? According to Harvard Law professor and former high-ranking Obama Administration official Cass Sunstein, it’s like discovering we’ve been speaking prose all our lives. In a recent op-ed Sunstein accurately observes that President Obama’s Second Inaugural (not to mention his major actions) faithfully follows Franklin Roosevelt, who first called for a “Second Bill of Rights” in his 1944 State of the Union Address.

A former University of Chicago law school colleague of Obama, Sunstein describes the 1944 Address as “the speech of the century” in his 2004 book, The Second Bill of Rights: FDR’s Unfinished Revolution and Why We Need It More Than Ever.   FDR listed eight rights based on new, “self-evident” “economic truths”—most prominently “Necessitous men are not free men.” Through Supreme Court decisions and legislative action, a consensus has developed, such that in many ways “we live under Roosevelt’s Constitution whether we know it or not. The American Constitution has become, in crucial respects, his own.”  Not just history or legal analysis, this accessible book lays out the principles for Obama’s second term. Sunstein’s scholarly work and government service are together a remarkable example of theory being turned into practice, before our very eyes.

Throughout the book the challenge for Sunstein is to explain how Roosevelt’s New Deal can be reconciled with American exceptionalism—our stubborn adherence to individual rights and deluded belief in equality of opportunity, which he links to continuing discrimination against minorities. Our exceptionalism can be summarized as our historical aversion to socialism. He sees in the logic of the Second Bill of Rights an expansion of Americans’ notions of rights that they will come to accept and ultimately alter the meaning of America. Sunstein or Sunstein’s Roosevelt (and Obama) would refound America.

Only, as FDR did, by disguising individual rights as collective responsibilities can leftists get around this American stubbornness. “In a nutshell, the New Deal helped vindicate a simple idea: No one really opposes government intervention.”  For example, in his Commonwealth Club Address, on Progressive Government, Roosevelt declared that “The day of enlightened administration has come”—a line Sunstein does not note. Nor does he say that for FDR the limit on economic growth compels the rise of bureaucracy. FDR’s riveting campaign speeches, his ambitious presidential addresses, and of course his experimental policies culminate in his Second Bill of Rights:

We have come to a clear realization of the fact that true individual freedom cannot exist without economic security and independence. [Cf. “together, we” in Obama’s Inaugural.] “Necessitous men are not free men.” People who are hungry and out of a job are the stuff of which dictatorships are made.

In our day these economic truths have become accepted as self-evident. We have accepted, so to speak, a second Bill of Rights under which a new basis of security and prosperity can be established for all regardless of station, race, or creed.

All of these rights spell security. And after this war is won we must be prepared to move forward, in the implementation of these rights, to new goals of human happiness and well-being.

Of course these so-called rights are readily questioned and even ridiculed—a right to sufficient income enabling recreation? A good education? A few weeks ago Justice Thomas laughed at the argument that an attorney’s Ivy League law degree meant a defendant had enjoyed adequate legal representation. Only massive redistribution could begin to meet these requirements, which ultimately rest on a malleable psychological measure of “security.” We have enough to fear from the fear of insecurity itself. Sunstein scoffs arguments on this level:  “the fear of tyranny is jejune.” After all, the “New Deal might be described as an effort not to incorporate socialist thinking but to preserve capitalism by removing its harshest edges.”

And Sunstein cheerfully defends FDR’s revolution in an array of fascinating  arguments—reviving the Supreme Court social welfare opinions of the 1960’s and 1970’s (sadly stifled by Nixon’s appointees), creatively deepening the republicanism of the original Constitution and of Reconstruction, and expanding the meaning of “security”—with citizenship as a form of security (as in the immigration debates). And we need to look abroad to consider model Constitutions that contain full-throated “expressive rights” such as that of South Africa and various international accords, which, for example, recognize the rights of children.

In this sense, Sunstein argues, good constitutions are “countercultural,” taking us where we ought to go from where we are.  Rights must always be positive and require government, not simply oppose it. The Sunstein argument might go like this: For the defense of the founders’ negative right of property, police, courts, court houses, schools (including of course law schools to train the lawyers to argue cases), roads (so parties can keep at the court house) all reflect the need for government of some sort at some level. Immersed in thinking like this, one all too naturally blurts out thoughts like “You didn’t build that!” or that American exceptionalism isn’t all that exceptional.

We need to reply by revisiting his fundamental question about America’s rejection of socialism and his dismissal of tyranny as “jejune.” He takes neither individual rights nor the founders’ worries about tyranny seriously. To answer Sunstein, the founders did not include economic or social guarantees in the Declaration or Constitution because their commitment to individual natural rights required opposition to classes. James Madison’s definition of property, unrecognized by Sunstein: “as a man is said to have a right to his property, he may be equally said to have a property in his rights.” Sunstein even tries to create a collectivism out of republican principles in the Constitution, using the Second Amendment as an example: “Its central goal is to protect against an overbearing national government.”  The late John Adams Wettergreen smelled a republican rat and got historian Joyce Appleby to admit that “republican” in this sense (the sense of “citizen” for the French Revolutionaries) is “a chicken word for socialism.”

The heart of socialism is not collective ownership of the major means of production, but rather the insistence on the identity of each individual good with the common good. The politics of freedom means conflicts over the common good. Thus, a real Bill of Rights, such as Part I of the Massachusetts Constitution of 1780, contains not just basic individual freedoms but the separation of powers as well. To shake off any accretions, it also insists on kind of paleo-originalism:  “A frequent recurrence to the fundamental principles of the constitution.” Moreover, the governmental world is not the whole world, and the attempt to do so would produce tyranny. Hence Tocqueville carried out the founders’ logic and  emphasized civil associations as essential for freedom. In contrast, Sunstein’s bureaucratic proposals would squeeze out the charity in Christian charity as it diminishes religious freedom. (I have previously defended American constitutionalism against Sunstein’s aggressive regulatory regime.)

In this way, the creation of new rights erodes the older, fundamental ones. In a review of Sunstein’s republic.com (link no longer available)  Edward Erler observes, “Sunstein concludes that the Internet is in need of regulation because free choice does not always produce genuine freedom. Nothing characterizes Sunstein’s concept of freedom more than Rousseau’s injunction that men must be forced to be free.” It follows that speech in a variety of forms may be regulated.

Finally, for a book this provocative, one must note a major omission in his thorough study of the text and nuances of the “Second Bill of Rights” address. How could Sunstein ignore the sixth from the last paragraph:

One of the great American industrialists of our day—a man who has rendered yeoman service to his country in this crisis-recently emphasized the grave dangers of “rightist reaction” in this Nation. All clear-thinking businessmen share his concern. Indeed, if such reaction should develop—if history were to repeat itself and we were to return to the so-called normalcy of the 1920’s—then it is certain that even though we shall have conquered our enemies on the battlefields abroad, we shall have yielded to the spirit of fascism here at home.

While Americans of all parties were dying abroad in defense of their country, Roosevelt equated Republicans of the 1920’s with fascists. FDR saw a single enemy on two fronts: fascists at home as well as fascists abroad. Suppressing this paragraph is a major act of intellectual dishonesty on the part of a scholar often praised for his openness to contrary thinking. Does the left require such thuggishness in order to prevail over American exceptionalism? Possibly not, but it is ever present, and it has never hurt them.

A Program of Integrated Frivolity

Sunstein’s False Claim that Scalia Was a Living Constitutionalist