My Left Foot is a touching film (and novel) about a poor young Irishman, Christy, with cerebral palsy; he can neither walk nor speak. But he has a shrewd mind and uses his left foot, the only limb he controls, to draw, paint, and thereby express his soul.

President Obama’s recent State of the Union Address also told a tale about overcoming disabilities. The disability metaphor extends through the entire speech and culminates at the end, when he introduces his special guest, a severely injured Afghan war veteran:

Cory is here tonight. And like the Army he loves, like the America he serves, Sergeant First Class Cory Remsburg never gives up, and he does not quit.

My fellow Americans, men and women like Cory remind us that America has never come easy. Our freedom, our democracy, has never been easy. Sometimes we stumble; we make mistakes; we get frustrated or discouraged.

This trans-partisan moment of the speech portrays America as a wounded, disabled, soldier. This comparison of America with the injured sergeant, while intended to inspire, jars—especially coming from the obsessive basketball player who famously compared his inept bowling to a “Special Olympics” performance. 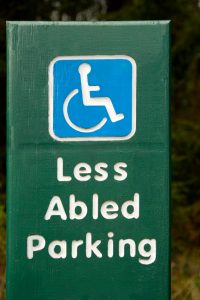 Is America the disabled Army vet—heroic but quite possibly crippled for life? And, more important for understanding the State of the Union and this President, does Obama look on his country with that “Special Olympics” sneer?

The Obama address deserves the derision many commentators have heaped upon it. Cliches (“with our feet planted firmly in today but our eyes cast towards tomorrow”), a too convenient passive voice (“part of the Voting Rights Act was weakened”), and other bad writing plague the address. The speechwriters seem to have lost their spirit, inviting comedians and pundits to gleefully pile on. It became too easy to hear Obama singing his own version of the Pete Seeger song, “This Land is Mine!” Attempts to rescue the speech only reinforce its vices.

“Now opportunity is who we are. And the defining project of our generation must be to restore that promise.” Overcoming disability is a metaphor for his Presidency—which he has reduced to having a pen and a phone. And will he draw red lines on the water? And if he calls, will those he addresses listen, and act? Has he fallen and can’t get up?

Having worked in an agency established by executive order, the Office of Federal Contract Compliance Programs (OFCCP), I can add from my own experience the confusion of trying to enforce civil rights on federal contractors. First of all, an executive order implements a federal law or a constitutional power—the most famous executive order being Lincoln’s Emancipation Proclamation, based on Article II war powers. Obama’s action regarding a pay increase may be unconstitutional, for it may violate the statute that it implements, the Federal Property and Administrative Practices Act of 1949.

Next, there are likely other restrictions. For example, OFCCP powers cover a federal contractor if it has a certain number of full-time employees. Does the employee number apply to subcontractors, too? Let’s say an Army base has a contract with a food supplier, which subcontracts services to a cleaning company. Is the cleaning company covered?

The executive order on minimum-wage might presage another on discrimination against gays in a federal contractor, by including them among protected groups eligible for civil rights and affirmative action enforcement—including measurement for bias by statistical inferences. (See my earlier remarks on how Secretary of Labor Perez could use his powers.)

Bill Galston noted in his recent Wall Street Journal column other, political limits to what executive orders can achieve. Recalling the ethnic Japanese relocation of World War II and Truman’s steel company seizure as examples of disastrous, repudiated executive orders, Galston concludes that “The path to progress runs through Capitol Hill, not around it.”

For all his roaring about pens and phones, what has come forth is a ridiculous mouse. The rage and incoherence arise from a flawed understanding of equality, as the fundamental principle underlying America.

Obama does not see that equality—as equality of fundamental, natural rights—is the principle that limits government power under constitutionalism. For Obama equality is an evolving historical ideal that justifies unlimited government power, as he insists in his Second Inaugural. But when placed in a constitutional system based on true equality he feels stymied (and hence he calls for people outside Washington to change the system). In this way the old Constitution is not dead but is still actually working.

Thus, Obama could complain in his address that “when that debate [over founding principles] prevents us from carrying out even the most basic functions of our democracy—when our differences shut down government or threaten the full faith and credit of the United States—when we are not doing right by the American people.” If the Constitution gets in the way of progress, ignore it.

The State of the Union address reflects much of the weary Obama found in David Remnick’s recent New Yorker interview with the President. Remnick describes recent fundraising trips to the west coast and finds the professor who plays the contrarian and urges those on the left to respect constitutional limits and moderate their zeal. (Recall that an attempt at moderation led to his 2008 campaign fundraiser remark about pathetic souls who cling to their guns and their Bibles.) Now this critic of Clintonian triangulation has been caught up in self-produced contradiction. In a kind of neo-Beardian move Obama might rather say he prefers his version of the Declaration of Independence to the Constitution.

The radical impulse becomes evident in Obama’s search for equality.

Obama met last summer with Robert Putnam, a Harvard political scientist who became famous for a book he wrote on social atomization, “Bowling Alone.” For the past several years, Putnam and some colleagues have been working on a book about the growing opportunity gap between rich and poor kids. Putnam, who led a Kennedy School seminar on civic engagement that Obama was in, sent the President a memo about his findings. More and more, Putnam found, the crucial issue is class, and he believes that a black President might have an easier time explaining this trend to the American people and setting an agenda to combat it. Other prominent politicians—including Hillary Clinton, Paul Ryan, and Jeb Bush—have also consulted Putnam. Putnam told me that, even if legislation combatting the widening class divide eludes Obama, “I am hoping he can be John the Baptist on this.” And Obama, for his part, seems eager to take on that evangelizing role.

Obama understands the rhetoric of class as well. “In 2011, at an annual dinner he holds at the White House with American historians, he asked the group to help him find a language in which he could address the problem of growing inequality without being accused of class warfare.” This was apparently the same, off-the-record gathering at which Obama reportedly said he was thinking of “A New Foundation” as the slogan for his administration. To which Doris Kearns Goodwin objected, that sounds like a woman’s girdle.

The desire to set the Constitution aside echoes in Remnick’s final words.

A little while later, as we were leaving the Oval Office and walking under the colonnade, Obama said, “I just wanted to add one thing to that business about the great-man theory of history. The President of the United States cannot remake our society, and that’s probably a good thing.” He paused yet again, always self-editing. “Not ‘probably,’ ” he said. “It’s definitely a good thing.”

One trusts as true the first-draft Obama more than his self-edited version.

The FDA and Multiple Sclerosis

The Fraught Battle to Create an American Nationhood

As the United States marked its 243rd birthday this year, its citizens would be forgiven for worrying that the union might not reach its 250th.

What Is Consent? A Reply to James R. Rogers

Harry V. Jaffa, who died January 10, at 96, attempted to re-found conservatism on the basis of its most philosophical of principles.