Obama is making sure that nothing will stand in the way of Iran’s acquisition of nuclear weapons. Veiling that with a transparently insincere claim to be “freezing” Iran’s quest, and leaving in the lurch governments and peoples that had counted on his promises, he dishonors America. Thus does he guarantee that many more governments will acquire such weapons, and consigns to history the very ideal of nuclear non-proliferation.

But let us look on the bright side: There is value in leaving no doubt about reality.

In reality, nothing was going to stop Iran’s march to nuclear weapons, and nuclear non-proliferation was always a pipe dream. Governments of Europe and of the Middle East will now have to take responsibility for their own defense. And as soon as the inevitability of a world armed with nuclear-tipped missiles dawns through of Obama’s thin smoke screen, America’s ruling class will have to get serious about missile defense – a half century after it should have. 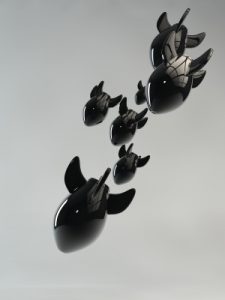 A generation of American statesmen had dreamt of staving off Iran’s nukes. But the Clintonian Liberal Internationalists’ offers of development aid never stood a chance of derailing a project that is dear to Iranians of all political stripes. Nor did some Bushy Neocons’ talk of “regime change” or other Bushies’ empty threats of “surgical strikes” frighten the Iranians away from it any more than did the Obamians’ “smart sanctions.”

Preventing Iran from going nuclear would require war. War, not bombing, which would merely delay the inevitable, but war – meaning above all a total, deadly secondary trade boycott backed by a blockade. Any military operations would be aimed at crushing (easily) any Iranian attempt to interfere with Persian Gulf shipping. The war’s objective would be the imposition of a more tractable regime. Anyhow, nobody in power ever gave this a second thought. Too hard.

But the war’s effect, though more lasting than that of bombing, would also be temporary because it would increase ordinary Iranians’ animosity against us.

We should have learned long since that nuclear weapons themselves are not the problem. Rather the problem consists of regimes, and of the attitudes that make them what they are. That is why we do not fear French nukes, and fear Russian ones much more than we did when they were in Communist hands. We fear a nuclear-armed Iran because of its regime’s – and yes, of its people’s – proclivities.

This brings us to the central, practical problem: Who is afraid of Iran’s nukes, and why? Israel, of course. After all, the Ayatollahs have trumpeted their desire to annihilate it. Israel cannot be complacent about that, and neither should we. But note the old adage that barking dogs seldom bite. Note also that Sunni regimes, like Saudi Arabia and the Gulf sheikdoms that rule substantial populations of Shia, fear Iran just as much as does Israel though the Ayatollahs never brandish their weapons against them. Why?

These regimes’ fear stems from their inability to counter Iran on the level of strategic weaponry, while they are utterly vulnerable to Iran’s political subversion of their Shia subjects. By the very same token, we and the Israelis can take substantial comfort from the fact – of which the Ayatollahs are by no means ignorant – that Israelis, never mind Americans – hold overwhelming strategic superiority over Iran in every sense, and are entirely immune from any subversion by it. That is reality.

This reality implies further intensification of the strife between Islam’s Sunni and Shia peoples. Whatever that portends for them, it means that the diminution of their cooperation against us that we have noticed in the past two years will continue. Chances are good that they will occupy one another in the future as they had until just a generation ago because, while the issues between them and the West are largely theoretical, the causes for strife between them are immediate, practical, and very deeply rooted.

So, while the contempt that Obama has brought on America is pregnant with the possibility of awful consequences, the certainty is no small comfort that any number of countries – those that had relied on us as well as their adversaries – will look to themselves and act as if America did not exist.

Americans should take this opportunity to focus on our own interests. In reality, few of what stirs the souls of Sunni and Shia concerns us. Yet we have allowed our involvement in their quarrels to divert us from what is irreducibly our business. For example, during the past generation, our national discourse on missile defense has been crabbed by a focus on Iran (and North Korea). Trying to limit our defenses to individual cases has diminished the efficacy of the devices we have built.

But our need for missile defense is comprehensive. The world is ever more awash in nukes and missiles. Technology makes it easier to defend against all than it does to defend against only some. The end of illusions about limiting the spread of nukes should stimulate healthy preparations for our own defense.

Israel, the U.N., and Double Standards

The Islamic State, and Us