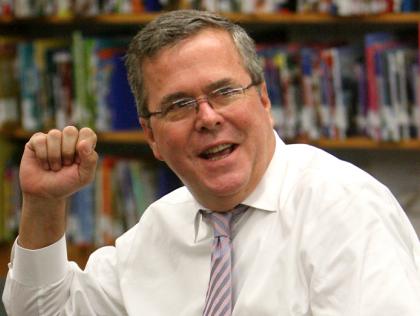 It is remarkable that four of the leading likely candidates to become the next President of the United States have had close relatives who were Presidents or were serious candidates for President. The dominant Democrat, Hillary Clinton, is married to Bill Clinton.  On the Republican side, Jeb Bush who is perhaps a slight frontrunner, counts both his father and brother among former Presidents.  Mitt Romney, the Republican nominee for President in 2012, is also the son of George Romney, a prominent candidate himself.  And Rand Paul is the son of Ron Paul, a perennial candidate for President.

In a relatively meritocratic nation, how can our candidates for President have such a hereditary cast? Perhaps it just happens that, of the 200 million adults in the United States, four of the best qualified candidates are close relatives of other Presidents or presidential candidates?  But there is a less happy answer: our campaign finance system provides advantages to the politically well connected and hardly anyone is as well connected as the close relatives of those who have been Presidents or have run substantial campaigns.

Those whose close relatives have been Presidents or serious candidates have the advantages of a nationwide brand gained by a combination of previous political advertising and free media. The brand creates a formidable barrier to entry that is exacerbated by our campaign finance system. The strict limitations on the amount of contributions citizens can make hurt candidates without a national brand, because they need more money to build up one of their own.  These newbies are prevented from approaching a few wealthy individuals who will stake them enough to run a credible campaign, but instead they must build up networks of bundlers for small donors. In contrast, those who can inherit their relatives’ networks or use one they developed in a previous campaign can even improve and, if necessary, reposition their brand.

The campaign finance system does allow candidates to use unlimited amounts of their own money.  But few of the 10,000 or so people in the United States with the fortune needed to mount a presidential campaign both have the qualities and inclination to run. The very wealthy can also provide independent expenditures for candidates they prefer, but that takes control of the campaign from the candidate who generally can make a more effective case.   In 1968 looser campaign finance regulations permitted Stewart Mott and few other rich liberals to propel Senator Eugene McCarthy into the race with large donations.  And McCarthy did the rest, coming so close to defeating President Lyndon Johnson in the New Hampshire primary that Johnson abandoned hopes for reelection.

We would be better off if we returned to an era where candidates could receive very substantial contributions so long as they were disclosed. These greater freedoms would make our presidential politics less insular—indeed less inbred.

Ramsey and Tillman on the Receive Ambassadors Clause