Far from being a cornerstone of our national defense, the Foreign Intelligence Surveillance Act (FISA) has proved to be an even worse idea than opponents feared when it passed in 1978. By providing judicial pre-authorization for many of our national security bureaucracies’ actions, it is habituating them to dysfunctional practices. By fostering the creation of a secret body of common law regarding civil liberties, it is perverting the American legal system. To repeal it, however, would require confronting the reasons why the security bureaucracies demanded the law in the first place and why they are increasingly attached to it.

By the late 1970s the intelligence bureaucracies – CIA, FBI, NSA – had become leery of conducting any electronic surveillance, even of Soviet Bloc embassies and persons, because some American Leftists who had worked with said embassies against the US in the Vietnam war had filed lawsuits against prominent individuals in these bureaucracies. They wished to be protected from lawsuits in national security cases as they are in cases of wiretaps for domestic criminal purposes – by judicial warrants. Trouble was – and is – that to ask a judge for a warrant on open court is eventually to reveal the surveillance to the objects thereof. The bureaucracies asked Congress to square the circle by establishing a secret court.

In 1978, given my role in opposition to the proposed FISA on the staff of the Senate Intelligence Committee, the American Bar Association (ABA) invited me to debate the issue with then professor Antonin Scalia of the University of Chicago Law School. I said that requiring judicial authorization for an executive action in pursuit of national security is an unconstitutional obstruction of the President’s power as commander in chief. Scalia agreed but pointed out that the President, i.e. the bureaucracies supported involving judges because they realized that the obstruction is theoretical rather than practical: the secret court having no basis for judging what is or is not required by national security would just give the agencies the confidence to do their jobs. I countered that the confidence would be problematic: although strictly speaking the court could confer only a procedural imprimatur, in practice that would shield the bureaucracies – and the President – from having to defend the substantive value of any act of surveillance.

Prior to FISA, the intelligence bureaucracies’ actions, although unquestionable a priori because undertaken secretly, could always be questioned ex post facto. Once FISA became law, the claim that any given act was good because it was lawful would make substantive questioning more difficult. 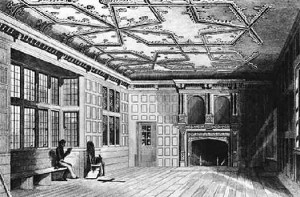 The Court of Star Chamber

In the ABA debate, I also argued that a court hearing only one side of a case, ex parte, in secret would be a foreign body in the American legal system. Ex parte secrecy had been the defining feature of England’s infamous “Star Chamber.” Scalia agreed but pointed out that the FISA court’s jurisdiction would be very limited. I countered that Congress could expand that foreign body. Scalia said that we were debating only the law then proposed, as indeed we were.

But FISA’s promise to bureaucrats – secret pre-authorization and virtual immunity from criticism – proved impossible to resist. Already in the 1980s the Intelligence Committees were receiving requests to place authorization for FBI infiltration of domestic groups “of national security interest” within the FISA system. After 9/11, when the Agencies were trying to expand their authority in order to excuse themselves for having failed adequately to use what they had already, they found in FISA a convenient cover for not explaining to Congress, to the public, (and I would bet to themselves as well) precisely how useful those new authorities would be. FISA also helped them to reassure Congress that all would be done within the law.

But law evolves, by dint of judges’ reasoning as well as by Congressional enactment. So it has been that the FISA court – like all other courts, elaborated new law. But this secret court did it in secret. We always knew this in the abstract. But when we the public learned that the NSA had been collecting metadata on all phone calls and was reading computer traffic at will, and when agency heads said convincingly they believed they were acting legally, we reasonably suspected a secret source of new law. A well connected reporter for The New York Times gave us some of the details about how the FISA court serves as that source.

Specifically, said the Times, the secret court applies a doctrine of the Supreme Court called “special needs,” meaning small intrusions for important purposes “used to justify airport screenings, for instance, or drunken-driving checkpoints — and applies it much more broadly, in secret, to the wholesale collection of communications.” This says the story “will most likely shape intelligence practices for years to come.” How it will do this depends strictly on the private dialogue of persons unaccountable to the public. How small is small? How important is important? Who are the proper targets? Who is responsible for making things come out right?

Such questions are of a quintessentially public and political nature. FISA is not the only means through which our national security has become weakened by bureaucratization. But it is important enough to deserve repeal.

PRISM’s Conquest of the Private Sphere

Unconstitutional at Any Speed: Assessing the Legacy of Obama

Lashing Presidents to the Mast