You would have thought we were watching a Mr. Smith Goes to Washington ending with the corrupt Senator shooting filibustering good guy Jimmy Stewart.

Whatever good or ill the filibluster has produced in years past, reliance on this and other institutional devices kept conservatives from making more fundamental arguments concerning the Senate’s purpose. Fundamental, philosophic issues were suppressed in favor of “process.” Thus in the leadership slots we get American variants of Anthony Trollope’s parliamentarian Timothy Beeswax when we need men with virtues beyond cunning.

I join my blogging colleagues in diminishing the long-term significance of the filibuster’s demise. As Greg Weiner, himself a former Senate staffer, notes, “The rarity with which [the filibuster] was once used, even in the Senate’s heyday, calls into question the notion that it is somehow integral to the body’s proper functioning. The institutional culture, now badly eroded, is a far more important factor in the Senate’s constitutional corrosion.” He joins originalist, Mike Rappaport, who emphasized that tit will follow tat. 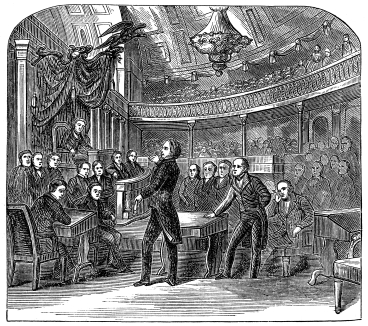 Yet another originalist, an astute student of federalism and the Senate, Ralph Rossum, argues that the filibuster (as that body’s internal rule) is at its strongest concerning the preservation of federalism, which the Senate uniquely defends. The filibuster is also legitimate when applied to legislative matters in general. It should not, however, he argues, extend to judicial and many executive branch nominations. Rossum does put executive agencies (which he rightly holds of dubious constitutionality) in a separate, condemnable category. He has argued that if the framers wanted a supermajority vote for life-term judges, they would have written that into the Constitution, as they did for Senate ratification of treaties.

These originalist approaches to the filibuster appear to uphold the legitimacy of the filibuster change, without of course supporting the subsequent judicial or executive branch appointments. They remind us of the obligation to prefer constitutional principles over current public policy preferences we happen to hold. And this will turn out, I argue, for the best in policy consequences.

The fundamental problem of Congress is this Progressive transformation of the Congress. Willmoore Kendall’s former “red branch” Congress has now become deeply blue. With their bravado denunciation of unconscionable delay and their appeal to “get things done,” the Senate majority leader and his team stuck yet another knife in the old Constitution. The first formal blow was the 17th Amendment, which made the Senate directly elected by the people. Allegedly an attempt to purify their election, in fact it decoupled state legislatures from national vision. This made it all the easier for majoritarian (frequently demagogic) appeals to win Senate seats and legislate for the people. The Progressives wrongly elevated bribery over demagoguery in the catalogue of democratic sins.

Stepping back from the current farrago, we note that the House of Representatives, under both parties, has lately functioned like the House of Commons. The old deliberative Senate is long dead. When the Congress is divided, this lack of deliberation in the House encourages the filibuster in the Senate, where it has been applied rather promiscuously, to legislation and to executive branch and judicial nominations. Attention to the filibuster as a means distracts from the presumptive aim of blocking nominations: containing the Administrative State or bureaucracy.

Because Senate elections occur for one-third of its members every two years, some of the traits of the old Senate remain, enhanced by its internal rules, such as the late filibuster. The Progressive emphasis on “getting things done” is contrary to the founders’ view of the Constitution and the purpose of national government. The founders’ great fear—see Federalist 10 and 51—is majority faction. Preventing this evil, while maintaining majority rule, is the burden of the first part of the Federalist Papers (1-36). Therefore the founders, fearing demagoguery, invented ingenious ways to prevent simple majoritarianism from ruling. The filibuster played well into this constitutional principle, following the establishment of political parties, but its defenders did not articulate its relationship to this fundamental principle.

With its optimism about human nature’s ability to wield political power, Progressivism made “getting things done” the primary focus of national politics. Didn’t the crises of national life—the rise of corporations, mass immigration, war, and class conflict (plus ca change!)—require the national government to transform itself to meet its purposes? This love of legislation has generally trumped the fear of tyranny—until now, when Obamacare turned over the rocks and exposed the underlying ugliness of Progressive policy.

The Democratic leadership today has essentially the same message as their predecessors Theodore Roosevelt, Woodrow Wilson, and Franklin Roosevelt. With Obamacare the ordinary citizen can see the practical result of replacing natural law with Darwinism, “safety and happiness” with political experimentation, and the real Bill of Rights with the “Second Bill of Rights.” It is time to spotlight the naked defense of these policies in Franklin Roosevelt’s First Inaugural and insist on bipartisan debates over them, as I have argued before.

Unfortunately, the Republican opposition today has even weaker arguments than their predecessors, such as Elihu Root and William Howard Taft, who at least made constitutional objections. Today’s Republican legislators come out of law schools, where the Constitution is no longer seriously taught. And natural law principles are nowhere to be found. They learn procedural objections but cannot get to the principle, the heart of the matter. Their rhetoric against “judicial activism” bears the same taint—Why not be active in defending liberty?

But even if today’s Republicans are by and large incapable of identifying the evil as Progressivism, they can at least make the target Obamacare and hopefully, by extension, the entire apparatus of the administrative state, viz. bureaucracy. The federal appeals court slated for the nominees that triggered the controversy is the D.C. circuit, a key court for Obamacare. Thus the filibuster overhaul, far from being a distraction from his Obamacare woes, is actually an attempt to throw up protection of this disaster. This desperate defense of Obamacare (and its bureaucratic brethren) should be the message, not some appeal to “the traditions of the Senate” and a resurrection of the late Senator Robert Byrd.

Finally, let us remember why Harry Reid is still in the Senate in the first place and majority leader, to boot. Why isn’t he writing his memoirs? Look no further than Sarah Palin. For those whose instinct is to recoil in disgust, just look up the list of those she endorsed for Senate races over the past election cycles and note the number of Republican women who received her endorsement and won (as well as those, such as Reid opponent Sharron Angle, who ignominiously lost). Recall too that in some races she went against the Tea Party picks. That is the Republican strategic power and problem right now. Their best horse picker is Sarah Palin.

Is the Replication Crisis a Problem for Progressivism?

Freedom and the Political Good: Some Preliminary Considerations