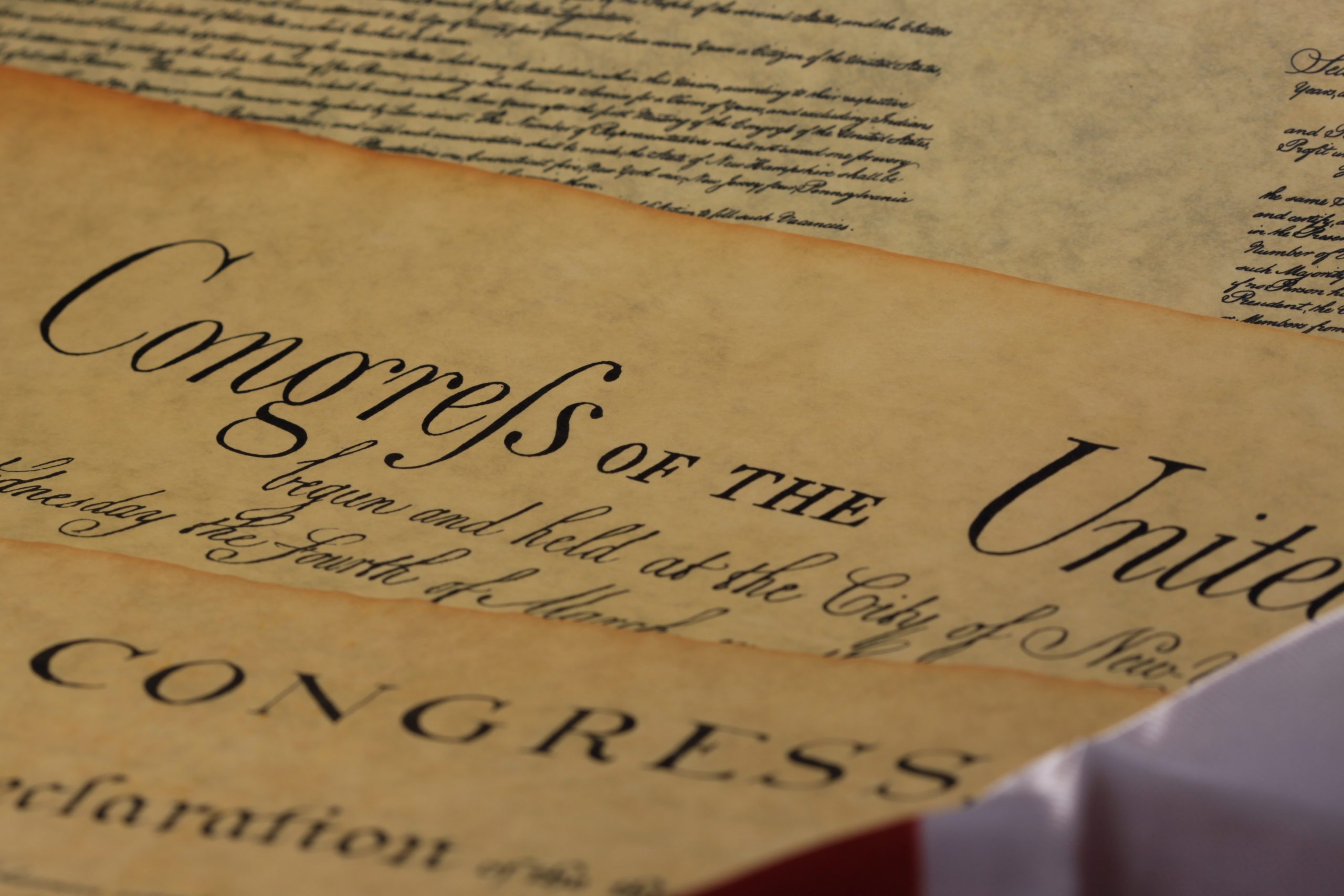 Beneath its cool blue cover, Constitutional Morality and the Rise of Quasi-Law is an explosive book. The thesis of coauthors Bruce Frohnen and George W. Carey is that constitutional government as was once known in the United States is in fact a memory.

They define what we have instead—a realm of “quasi law”—as:

a series of directives with the force of law that lack the crucial characteristics of genuine law. Emanating from all three branches of government, quasi-laws create rights and duties like laws but lack essential legal attributes such as promulgation through prescribed means and provision of predictable rules rather than mere delegation of discretionary power.

This regime is recognizable to citizens who have had to make their way through the myriad of regulatory structures that comprise most individuals’ contact with “the law.” Not incidentally, this realm of discretion, unclear directives, and lack of accountability privileges a lawyer-priest class who know how to negotiate this dangerous landscape and guide the hapless ordinary American through it.

The use of executive orders and presidential “signing statements” is another example of the rise of quasi-law. Such actions do not share most of the characteristics of law in the American tradition, and indeed for many decades were restricted, in practice if not by law, because of how American understood the nature of their self-governing republic.

Frohnen and Carey contrast quasi-law with an older understanding of “constitutional morality.” By this term they mean “the felt duty of government officials in particular to abide by the restrictions and imperatives imposed on them by a constitution.” Constitutional morality was a concept developed largely through the work of Carey (1934-2013), who taught political science at Georgetown University for over half a century. In books like Basic Symbols of the American Political Tradition, first published in 1970 (a classic work that he coauthored with Willmoore Kendall), Carey placed our political life within the larger context of the nation’s historical and cultural experience. Basic Symbols argued that Americans have understood themselves as a self-governing people with a particular history, in which events such as the Mayflower Compact serve as symbols of that experience.

The work of Frohnen, who is a professor of law at Ohio Northern University College of Law, can be seen as continuing that important project. Commenting on Basic Symbols, Frohnen described

the cluster of symbols of self-government by a virtuous people deliberating under God was forged by acts of word and deed, but most especially by public documents such as the Constitution. These words and deeds shaped a tradition that flourished for centuries and was not seriously questioned among the people until the 1960s.

The duty to abide by the limits enshrined in the Constitution, says Frohnen, is bound up in  “the notion of an ‘American way,’”—it is both example and important part of the nation’s larger constitutional morality.

Constitutional morality is different from, but overlaps with, that often-misused phrase, the “unwritten Constitution.” The great American thinker Orestes Brownson popularized the latter term, which Brownson defined as:

the real or actual constitution of a people as a state or sovereign community, and constituting them such and such a state. It is Providential, not made by the nation but born with it. The written constitution is made and ordained by the sovereign power, and presupposes that power as already existing and constituted.

This is a definition that obviously clashes with that found in mainstream liberal constitutional scholarship. “We the People” made the Constitution to reflect that people’s current existence as a cultural and political unity of American communities developed over time, and “the form of union they chose—their written constitution—by its nature depends for its character and its efficacy on the institutions, beliefs, and practices that preceded and helped produce it,” write Frohnen and Carey.

The current volume takes apart the argument put forward by thinkers like Akhil Amar, whose unwritten constitution is of a very different kind. According to Professor Amar, an unwritten constitution merely provides guideposts for a Progressive future. Such an understanding  is transformative of, rather than faithful to, the actual constitutional text or supporting tradition.

Frohnen and Carey here trace the roots of quasi-law to the Progressive era. This is not surprising. Indeed the Progressive mentality of the early 20th century is the root in many ways of our currently flowering leftism: misguided reliance on experts and displacement of the will of the people onto an unelected bureaucracy. The authors discuss some of the more important works developing the justifications for the administrative state, such as those by Frank Goodnow, Herbert Croly, Woodrow Wilson, and Pendleton Herring. The quest to reflect the popular will ends, in the hands of these writers, in the conclusion that a bureaucracy insulated from popular pressures and controlled by experts is the purest expression of what is “best for the people.”

The result of the Progressive revolution was in essence a new government. Progressivism would, as Frohnen and Carey write, “in essence, blur the separation of powers, creating a fourth branch of government in which the powers of the other three would be mixed.” And it would “substantially increase the powers the president would be called to exercise.”

What the Progressive constitution signally lacks is restraint, which was a key element of the Founders’ constitution, and which was definitively cast aside with the New Deal in the 1930s and 1940s. In a distinction critical to understanding Frohnen and Carey’s argument, Progressives espouse what they term a “commanding,” not a “mediating,” constitution. The “command constitution” demands action, and has little patience for the deliberately slow pace of the American constitutional design. The discretion of the executive—and through the executive, the bureaucracy—to act, becomes so great as to efface not only the separation of powers but even the recognition of different political units such as the states.

But what is wrong with that? The Progressives would say that such a “living” constitutionalism is exactly what is required for a changing social and political system, and many do not even bother pretending that fidelity to the written text is a relevant criterion. But for Frohnen and Carey, this use of the law, and of quasi-law such as regulations and executive acts, destroys rather than supports free government.  Law for the Progressive is a tool to further social progress and end perceived evils. Because the Progressives believe that their good intentions are what matter most, the written text of the Constitution and the settled practice and customs of a people can be disregarded. But as the authors point out, the law

is not, in fact, a tool in any meaningful, practical sense. Laws are not discrete objects capable of achieving narrowly defined ends. Law rests on common, cultural assumptions relating to our common identities.

To force the law to upset those common assumptions can result in conflict—even violent conflict. Thus, the expanse of the regulatory state into areas of religious belief, for example, in the interest of “health” potentially harm our traditions of religious liberty.

Frohnen acknowledges that we may have come too far to return to a mediating constitution of the kind that guided the nation from its Founding through the 1960s. Our settled practices and understandings, in the sense of Brownson’s unwritten constitution—especially in the four decades since Carey and Willmoore were writing—may have frayed too much to recover. New understandings of rights, government structure, and a disregard for restraint in the pursuit of socially transformative goals have taken their place.

Recovery in any event must first be cultural and not political, a project Frohnen and Carey think would take decades if it is to occur at all. Nevertheless, the authors propose a recognition of the limits of law, and a return to what they call “associational pluralism.” The array of formal and informal groups that provide meaning to people, and that also provide multiple sources of political power, are places to begin.

Constitutional Morality is a subtle, sophisticated work that covers a lot of ground, including the nature of common law, judicial reasoning, and much else. But it is not without polemical bite, since Frohnen and Carey address with deep concern the fracturing cultural and philosophical principles and assumptions that gave birth to our republic and whether any nation so conceived can endure.

The Ring of Buckley

A Constitution in Full

Liberal Constitutionalism and Us