So I spoke at what the American Political Science Association apparently viewed as one of the key sessions of their recent annual meeting. The session was about how to respond to the “Coburn Amendment.” Sen. Coburn successfully proposed that funding to political science be limited to projects that demonstrated a contribution to either economic prosperity or natural security.

I thought I was asked to be on the panel to ensure it would be objective or at least fair and balanced. But I was alone and ignored as the single spokesperson among thirteen in giving the case against NSF funding. The real point of the panel was to mobilize self-righteous opposition against Coburn and his Amendment, to strategize how “political science” could best function as an interest group. Anyone, I heard, who thinks there’s something to Coburn’s challenge is enslaved to the status quo, against equality and diversity, and wants ignorant despotism to trump scientific freedom.

Well, I don’t fit into any of those categories. The status quo, in part, is, after all, President Obama, who was portrayed as quite the friend to political science. Equality and diversity, in most political scientists’ own self-understanding, are values that might be served by science but are outside the scope of science. I’m all for equality and diversity rightly understood, but I don’t think it’s the job of the NSF to teach me why. Equality and diversity are different from prosperity and military power, which are quite measurable and materialistic outcomes that are themselves means–not ends. Determining what money and might are for is outside the scope of science as it is usually understood. They can be used for equality or diversity–or not. Finally, scientific freedom hardly depends on government funding. It might actually be compromised by it, insofar as the taxpayers are perfectly right to believe they should be able to say how their money is used, even if their values aren’t the same as those who claim to be scientists. Sen. Coburn might actually be right that the proper government concern is far less theoretical than technological, although he should have added health to prosperity and military power.

Anyway, here’s what I said, with a few refinements and additions:

Let me defend the proposition that the NSF shouldn’t fund scientific or methodical political science. I’m not that kind of political scientist and would never seek or qualify for NSF funding. So someone might accuse me of being full of envy and malice. If I can’t have something, then you guys can’t either.

Still, as a taxpayer, I think it’s just a matter of fact that scientific political science doesn’t have a reliable record of producing the useful scientific discoveries that the NSF is all about.

Scientific political science is not achieving the goals laid out by Harold Lasswell and its other founders of prediction and control.

One reason among many is that borrowing models from other scientific disciplines lead to an overemphasis on the stability of systems. So political science didn’t forecast the fall of communism. Or the Arab spring. Or the morphing of the Arab spring into an Arab winter or at least a late fall.

Consider this: When various studies talk about the crisis of scientific literacy in our country, they say we need more STEM majors and we need to make sure that more of the Ph.Ds from MIT and Caltech are from or at least stay in our country. Occasionally, someone says that the definition of STEM might be broadened to include social science. Hard scientists, though, usually respond: Give me a break! Who says that what we need are more scientific political scientists to compete effectively with the Chinese? Surely such studies make it clear enough, from a scientific and technological view, where our funding priorities ought to be.

I know that lots of political scientists think of this funding thing as an identity issue. If we aren’t scientists, than what are we? We’re sure not humanists! For one thing, the humanities are more “relativistic” or more indifferent to facts and to truth than we political scientists, and much more indifferent, of course, than physicists. That’s why the NEH surely deserves much more to be criticized as ideological than the NSF. One of my main criticisms of the general tone of the APSA panel, in fact, is that it was too humanistic in the undisciplined sense, too much about complacently unchallenged values and not enough about thinking about what science is.

The identity crisis of political science is real, and so I feel our pain. 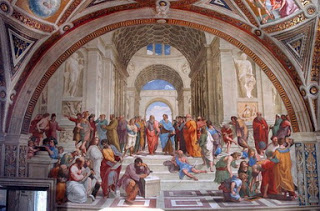 For me the real problem is the alienating and arbitrary division of human inquiry into science and the humanities. Aristotle, the first political scientist, locates political science between mathematics and rhetoric. It can’t be held to the standard of demonstrable certainty of mathematics, nor should it be reduced to the standard of persuasiveness (as opposed to truth) of rhetoric. It’s somewhere in between. Anyone with the experience and savvy to be attuned to political phenomena knows that judgments concerning both facts and values tend to be “probabilistic” and conditioned by both human prudence and the elusiveness of human freedom.

So I would widen our understanding of what political science is to include Aristotle, The Federalist, Alexis de Tocqueville’s Democracy in America, Machiavelli, and the reflections of our most astute political leaders. I wouldn’t deny that there’s something irreducibly partisan about political inquiry, as well as something, perhaps, irreducibly technological and methodical. But political inquiry is also about a devotion to the truth about who we are as other than the other animals and God.

There’s no way what political science is can be captured by the standards of either the NSF or the NEH. So I would propose a third government foundation for distinctively political inquiry. There, perhaps, we political scientists would feel less vulnerable to being misunderstood and just more at home.

Here are two purposes among many of this new foundation: It would criticize projects from the NSF when they lapse into scientism–when they claim to explain everything with a reductionist theory that has no place for political science. And, of course, it would criticize the NEH for its relativism.

Coase and The World that Was

The Fusion of the Personal, the Political, and the Scholarly

The inculcation of the humble spirit of true science in the study of politics is a good thing.

Is There “Science” in “Political Science”?

As a political scientist, I’ve never liked the name of the discipline. I certainly don’t think of myself as a “scientist.”