It’s hard to believe that the zombie apocalypse makes for good TV.

Now in its fourth season on AMC, The Walking Dead is extremely popular, due mostly to the initial creative development of Frank Darabont (The Shawshank Redemption and The Green Mile). We’ve discussed the many virtues of current television programming on this site before: I wrote about How I Met Your Mother here, and the estimable Ken Masugi discussed The Big Bang Theory here. Zombies, however, may be a first.

The Walking Dead puts a modern spin on the classic western genre, which has been in decline since the 1960s. The show revolves around a small group of survivors led by former sheriff’s deputy, Rick Grimes. A man who was once responsible for upholding law and order in civilized society now turns to the problem of how to survive and protect his family in a world overrun by zombies or, as they’re called on the show, “walkers.”

The entire world has become the old west, in other words. The walkers replace the bandits, the desperadoes, the cattle rustlers, and “the merciless Indian savages, whose known rule of warfare, is an undistinguished destruction of all ages, sexes and conditions.” But we find that the rules for survival still haven’t changed: the best defense is still many people with powerful guns.

Throughout the series, Rick always carries the same weapon he once used as a law man – a .357 magnum. He has tossed his badge away, but the gun remains at his side, one of the last vestiges of law and order. The only other remaining relic of law and order that has survived is an old prison, which provides a powerful means for the survival of the group. The walls and fences that once kept criminals from getting out now prevent the walkers from getting in. 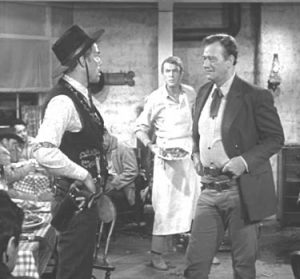 In John Ford fashion, season two begins with the search for Sophia, a young child from the group who has disappeared after being chased by walkers. The fear of everyone involved, of course, is that when they eventually find her, she will have transformed and have to be put out of her misery. We see that same fear in John Wayne’s character, Ethan Edwards, from the classic western, The Searchers.

After spending years pursuing the Comanche who kidnapped his young niece, Edwards begins to fear that even if they do find her, the girl he once knew and loved will be gone for good, transformed by her captors. There is a happy ending for Edwards and his niece, but not for Sophia.

Now, the world we see in The Walking Dead is no longer human. The walkers are no longer men, as Liberty Valance, the villain in another John Ford classic, The Man who Shot Liberty Valance, is clearly something less than human. One of the best lines of the film comes from the town’s newspaper man: “You call Liberty Valance a man?!”

But in a world that’s no longer human, how does one keep his humanity? This is the most interesting and complex issue of the series.

In Rick Grimes, we see a modern Tom Doniphon, who relies exclusively upon his gun for anything resembling law and order. Rick, however, is more focused on protecting people’s lives than preserving their humanity. First Dale and then Hershel, the old men, are responsible for maintaining the group’s collective hold on who they used to be before the collapse of civilization. They are the law book-carrying, rather than gun-packing, Declaration of Independence-reciting Ransom Stoddard. Everyone needs these old, wise men to remind them of their own humanity as much as they need Rick to protect them with his gun.

The Walking Dead addresses the same problems and reveals the same solutions as many classic western films. It is what we might call the modern western. But with zombies.

The 14th Amendment and Deference to Congress

The Decline of the Western

One of the best films ever made, Fort Apache shows that the modern world is still capable of virtue.