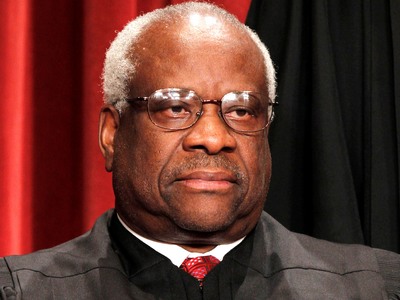 Jeffrey Toobin’s recent article in The New Yorker, “Clarence Thomas’s Disgraceful Silence,” is itself disgraceful. Toobin noted that, as of February 22, eight years have passed since Justice Thomas last asked a question during a Supreme Court oral argument. Toobin finds Thomas’s silence “bizarre” and “downright embarrassing, for himself and for the institution he represents.” He accuses Thomas as having “checked out” and of “not paying attention.” Thomas, he says, reclines his chair “so that he can stare at the ceiling, which he does at length. He strokes his chin. His eyelids look heavy.”

Not all agree. Damon Root of Reason magazine reports to the contrary that

I’ve attended a number of oral arguments in the past two years and I’ve routinely seen Thomas leaning forward, watching the lawyers (and his colleagues), and even conferring quite enthusiastically with both Justice Stephen Breyer (to his right) and Justice Antonin Scalia (to his left). In fact, during the first day of the March 2012 Obamacare oral arguments, which centered on whether an 1867 tax law barred the legal challenge to the health care law from going forward, I watched Thomas and Breyer together poring over a massive book that appeared to be a volume of the U.S. tax code. What were they up to? It’s possible Thomas was suggesting a line of questioning for Breyer to use. After all, as Thomas told an audience at Harvard law school, he sometimes helps generate Breyer’s material. “I’ll say, ‘What about this, Steve,’ and he’ll pop up and ask a question,” Thomas said. “So you can blame some of those [Breyer questions] on me.”

Toobin condemns what he calls Thomas’s “ludicrous behavior,” because, he asserts, oral arguments “are, in fact, the public’s only windows onto the Justices’ thought processes” – silly me, I thought their written opinions served that purpose. Toobin insists that all the justices must actively “engage” in oral argument – that would have been news to Oliver Wendell Holmes, Jr., perhaps the most influential theorist in the history of American law, who seldom asked questions. Then contradicting himself, Toobin regrets that “the current Supreme Court is almost too ready to do so, and sometimes lawyers have a hard time getting a word in edgewise.”

He is certainly right about many of Thomas’s colleagues being “too ready” to engage; in the recent high-profile case of Hollingsworth v. Perry (2013), Charles J. Cooper, representing the sponsors of California’s Proposition 8 (defining marriage to be only between a man and a woman), was interrupted sixteen seconds after beginning with the obligatory “Mr. Chief Justice and may it please the Court,” and before he could complete his first sentence.

It was not always so; consider an earlier highly contentious case, Dobbert v. Florida (1977), where the question was whether it violated the ex post facto clause for the petitioner, who committed his crimes before Florida was obliged to revise its death penalty procedures in light of Furman v. Georgia (1972), to be sentenced to death under those newly-revised procedures. The Court ruled, six to three, that it did not, but Louis O. Frost, Jr., the public defender representing Dobbert, was able to speak without interruption for eight minutes before he was asked his first question. The practice of allowing counsel the opportunity to elaborate on points in their own briefs and to respond to the arguments found in the briefs of their opponents was common in the 1970s and 1980s, with some of Toobin’s favorite justices – William Brennan, Thurgood Marshall, and Harry Blackmun – being generally quiet. How do we know this? Toobin says so himself in his The Nine: Inside the Secret World of the Supreme Court.

Thomas explained his silence during oral argument in an interview with Susan Swain on C-SPAN on July 29, 2009. Swain noted that, earlier in the interview, Thomas had referenced the fact that he listened during oral argument and that “much has been made of that by court observers. We’ve read and heard from other justices that sometimes the arguments are used for the justices to communicate with one another, telegraphing their opinions through the kinds of questions and areas they explore. . . . Do you pick up cues from other justices about where they’re going with a particular case from the questions they ask?” Thomas’ answer was revealing:

Not really. I think, I guess I view oral argument a little bit differently. I think it’s an opportunity for the advocates, the lawyers, to fill in the blanks, to make their case, to point out things perhaps that were not covered in the briefs or to emphasize things or to respond to some concerns, that sort of thing. In other words, to flesh out the case a little better, to get into the weeds a little more. I think we’re here, the nine of us, and we can talk to each other any time we want to. I just wouldn’t use that thirty minutes of the advocate’s time to do that, to talk to each other. . . . I think it’s hard to have a conversation when nobody is listening, when you can’t complete sentences or answers – perhaps that’s a southern thing. I don’t know. But I think you should allow people to complete their answers and their thoughts. . . . I don’t see how you can learn a whole lot when there are fifty questions in an hour.

I attended a presentation Thomas gave at Notre Dame Law School on February 6 of this year and heard him illustrate that point by referencing the Court’s oral argument in Association for Molecular Pathology v. Myriad Genetics (2013), a case in which the question was highly technical: Does the Patent Act allow for patents on human genes? Thomas wrote for a unanimous Court that while naturally occurring gene sequences, and their natural derivative products, are not patent eligible, gene sequences refined by synthetic processes to create molecules that do not occur naturally are patent eligible.

Thomas said he looked forward to learning from counsel in this case because the issues involved were complicated, technical, and challenging, and because these attorneys had thought longer and deeper about them than anyone else. What he got instead was constant interruptions from his colleagues, “eager to demonstrate how bright they were.” Christopher A. Hansen, attorney for the petitioner was repeatedly interrupted, beginning fifty seconds into his argument; six different justices queried him in his first four minutes.

That Thomas wants to provide opposing counsel with the time to make their case does not mean that he does not take seriously oral argument and spend a great deal of time preparing for it. John Eastman, Salvatori Professor of Law and the former Dean of Chapman University’s Fowler School of Law and a former Thomas law clerk, has offered this valuable insight.

This may no longer be true because there are a number of Justices on the Court now who were not there when I was a clerk, but I can tell you that Justice Thomas had a process that better equipped him for oral argument in every case than any of the other Justices on the Court. . . . Most of the Justices would assign a case individually to one of their clerks, and then at some point that clerk and that Justice would have a short meeting to discuss the case based on the bench memo that the law clerk provided. . . . Justice Thomas also assigned each case to a single clerk, but . . . the clerk did not just give the bench memo to the Justice, he instead gave it to all four clerks as well as the Justice. On every single case, we would have a clerk conference discussing the case that would last several hours. . . . [I]n every single case, we explored parallel bodies of law – the implications of the case, . . . [t]hinking very broadly and strategically about the importance of the case – recognizing, in a way that many lawyers and lower court judges do not – that the role of the Supreme Court is not so much resolution of a particular case, but to address the tectonic shifts that are going on in our overall jurisprudence. . . . Justice Thomas engaged in a process of thinking through that with his clerks, and it was an honor to be part of it. . . . He has an unbelievable grasp of both the broad constitutional theories, but also the technical details of every case. You do not get that from somebody on the bench who is lacking in confidence or lacking in intellect.

One suspects that Toobin attacked Thomas’s silence during oral arguments in an attempt, like a failed magician, to distract his readers with a clumsy sleight of hand. He wants to distract them from realizing how successful Thomas has been where it matters most – the decisions that follow from those oral arguments. He concedes that,

For better or worse [and for Toobin, it is definitely for worse], Thomas has made important contributions to the jurisprudence of the Supreme Court. He has imported once outré conservative ideas, about such issues as gun rights under the Second Amendment and deregulation of political campaigns, into the mainstream. Scalia wrote District of Columbia v. Heller, which restricted gun control, and Kennedy wrote Citizens United v. Federal Election Commission, which undermined decades of campaign-finance law, but Thomas was an intellectual godfather of both decisions.

I spell out the details of how and why Thomas has shaped these two issues as well as many others in my recently published Understanding Clarence Thomas: The Jurisprudence of Constitutional Restoration (University Press of Kansas, 2014). Toobin begrudgingly acknowledges Thomas’s impact, but then petulantly insists that “the public has lost, and should lose, any confidence it might have in Clarence Thomas.”

More gracious, and honest, are the reflections of another Thomas critic. Tom Goldstein, the publisher and co-founder of SCOTUS blog, has written: “I disagree profoundly with Justice Thomas’s views on many questions, but if you believe that Supreme Court decision-making should be a contest of ideas rather than power, so that the measure of a justice’s greatness is his contribution to new and thoughtful perspectives that enlarge the debate, then Justice Thomas is now our greatest justice.”

There Will Be Blood, Our Own

How Much Judicial Politicization is There?

The win for Little Sisters of the Poor isn't the nightmare the media describes. But in another way, it does point to a dysfunctional constitutional order.