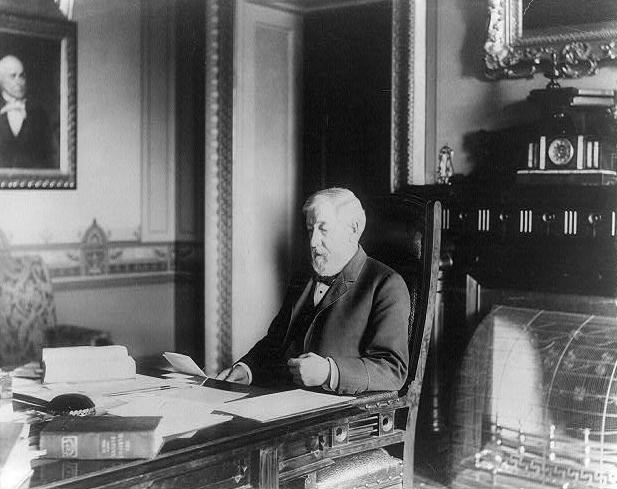 In his magisterial Separation of Church and State (2002), Philip Hamburger demonstrates that anti-Catholic animus contributed significantly to the post-Civil War movement to separate church and state. In the 19th century, this separation was usually between states and “sectarian” Catholic institutions and programs. “Non-sectarian” Protestant institutions and programs were largely exempt.

At the national level, the most notable manifestation of this anti-Catholic animus was the constitutional amendment proposed by Representative James Blaine (R-Maine) to prevent, among other things, public funding of schools “under the control of any religious sect.” Proposed in 1875, the amendment passed overwhelmingly in the House but did not receive the necessary two-thirds majority in the Senate. However, many states soon amended their constitutions to include similar amendments. Missouri did so in the same year that Blaine’s Amendment failed in the Senate.

In 2012, a preschool operated by Trinity Lutheran Church applied for a state grant to improve its playground. Of the 44 applications received that year, Trinity’s was ranked fifth on the basis of neutral criteria. The application was rejected solely because state officials concluded that awarding a grant to a preschool run by a religious organization would violate Missouri’s Blaine Amendment.

The Supreme Court agreed to hear this case (Trinity Lutheran Church of Columbia v. Comer) more than 15 months ago. Pundits have speculated that the justices delayed the case until Scalia’s replacement was confirmed in order to avoid a tie vote. However, if Wednesday’s oral argument is any indication, Justices Ginsburg and Sotomayor may well be the only fans of Missouri’s policy of discriminating against religious organizations.

Early in the oral arguments heard two days ago, Justice Ginsburg helpfully reinforced the claim that Everson v. Board of Education’s flawed history is to blame for the Court’s convoluted Establishment Clause jurisprudence. If, as she suggested, America’s founders desired an absolute ban on providing government funds to religious entities, the case should be an easy one. Everson’s historical arguments are bad enough, but Justice Ginsburg seems to have forgotten that the majority opinion in this case upheld a state program that reimbursed parents for the cost of transporting their children to schools—including parochial schools.

Interestingly, both sides in this dispute agreed that Missouri could provide a grant to upgrade a playground owned by a religious entity without violating the First Amendment’s Establishment Clause. This stipulation did not prevent Justices Sotomayor and Kagan from fretting about the possibility that someone might, on occasion, say a prayer on the premises.

Even if such a program does not violate the Establishment Clause, Justice Sotomayor apparently thinks that a prohibition on participation by religious organizations might be compelled by a long and noble tradition of Blaine Amendments. Several minutes after she made this suggestion, Justice Alito gracefully suggested to his fellow Catholic justice that these amendments may not, in fact, reflect “an admirable historical tradition that should be respected.”

Most of the justices seem to agree that the central issue in the case is whether a state can make a grant program available to all non-profit organizations except for religious ones. Attorneys for Trinity Lutheran ably contended that such a policy violates a host of constitutional provisions—most notably the Free Exercise Clause.

No one should be shocked that Justices Roberts, Thomas, Alito, Gorsuch, and even Kennedy are sympathetic to such claims. Far more surprising is that Justices Kagan and Breyer seem open to them as well. For instance, Justice Kagan observed that the state had created a competitive program open to non-profits but has “depriv[ed] one set of actors from being able to compete in the same way everybody else can compete because of their religious identification,” something she suggested moments later is a “clear burden on a constitutional right.”

Some readers of Law and Liberty may object that states shouldn’t make any grants such as the one in question. I am sympathetic to this view. However, we should all be able to agree that if a state creates a grant program and makes it available to almost every kind of non-profit organization, discriminating against religious ones should not be permitted. Certainly such discrimination should not be justified by outdated, anti-Catholic Blaine amendments.

[1] Technically, the state’s former policy of discrimination. Missouri’s current Governor announced last week that he is reversing a previous administration’s interpretation of the state’s Blaine amendment. Because of this change, there is a possibility that the justices will declare the case moot.

Historians and Originalists Part II: The Adequacy of Originalist Scholarship

The Empty Bromide of Religious Neutrality